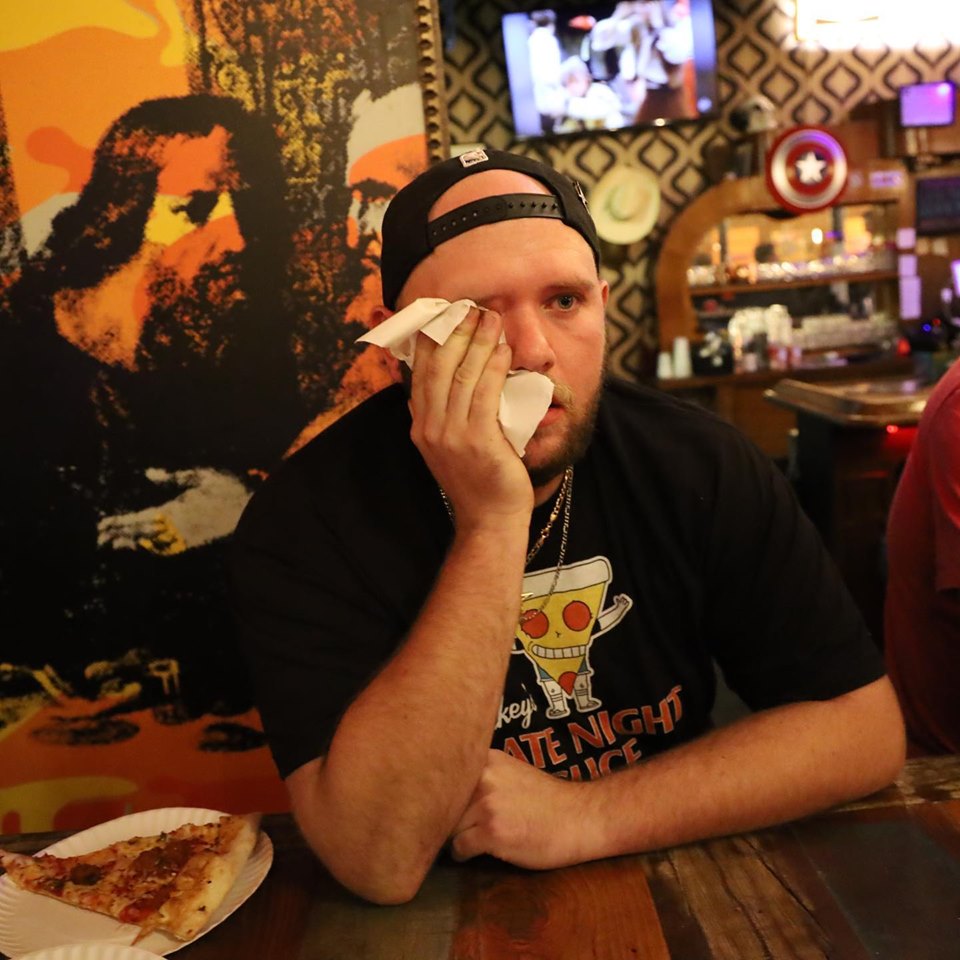 The owners of Columbus, Ohio-based Mikey’s Late Night Slice aren’t afraid to take a dare. But they might have finally outdone themselves with the “Fiery Death with Hate Sausage” pizza, a pie so blazing-hot that customers must sign a waiver before they can even taste it.

Laden with Carolina Reaper Peppers, Trinidad Scorpion Peppers and Bhut Jolokia Ghost Peppers (and, presumably, slices of sausage buried somewhere in the mix), it’s touted as the world’s hottest pizza. And it was the centerpiece of a recent promotion, called the Fiery Punishment Contest, at Mikey’s Cincinnati location. In the contest, held October 18-20, eight contestants raced to eat three slices of the pizza along with a raw Carolina Reaper Pepper. To keep things interesting, they were then required to stay seated for five minutes after the contest without any additional food or drink.

The pizza, which has been featured as a recurring special before, came about when a Facebook follower challenged Mikey’s owners—Mike Sorboro, Jason Biundo and Bryce Ungerott—to create “the world’s hottest pizza.” The Fiery Death with Hate Sausage pie proved to be such an attention-grabber, it has even scored national coverage from the Wall Street Journal.

“It’s literally the hottest food I’ve ever encountered,” Biundo told PMQ. “It’s damn inedible, really.” He adds that when he took his first bite of the pizza, “I literally cried. I was actually pretty foolish and only wore gloves when I made the first batch. There was nothing to protect my eyes and arms. I had what felt like first-degree burns on my forearms, and my eyes were swollen for hours afterward. I essentially weaponized my kitchen.”

“Being the one responsible for this, I was obligated to sample my monster,” Biundo adds, ruefully. “It was rough. But let me tell you: As much as it burns going down, nothing will prepare you for how it’s going to come out.”

To make sure customers know what they’re signing up for when they order the Fiery Death with Hate Sausage pizza, they literally have to sign on the dotted line. Biundo even consulted with an attorney on the waiver’s wording:

“IN SIGNING THIS WAIVER FORM YOU ARE ADMITTING THAT YOU ARE AN IDIOT FOR THE DAMAGE YOU WILL BE CAUSING YOUR MIND, BODY, AND SPIRIT FOR TAKING PART IN THIS TRAVESTY.

I acknowledge that eating any concentration of spicy foods that have the spicy pepper ingredients may or may not cause gastrointestinal or abdominal distress for an unknown period of time and to an unknown extent. I hereby state that I have no known or unknown health condition(s), including respiratory or cardiac illnesses, that may be aggravated by such and in case there is, Mikey’s Late Night Slice, its employees or affiliates shall not be held responsible or liable for any action in which I elect to consume any food that may or may not aggravate or cause any condition as a result of my consuming or over-consuming these spicy foods that contain Scorpion Chile, Ghost Chile, Habanero, Serrano, Cayenne, and Crushed Red Peppers and/or other spices. It has been made clear to me that highly intense spicy foods have been known to cause undesired effects such as overall discomfort, abdominal or gastrointestinal discomfort, flush, dizziness, extreme burning sensation, tearing, numbing, tingling and post-digestive discomfort on a temporary and or possibly permanent basis. Should I experience any of these effects I shall hold Mikey’s Late Night Slice, its employees or affiliates harmless for my indulgence in such and any undesired result thereafter due to any activity that includes consuming extremely spicy foods or overindulgence therein.”

Mikey’s isn’t the first pizza shop claiming to be home to the world’s hottest pizza. The Little Italy Pizza Company in Lincolnshire, UK, offered its own version, a pie packed with 20 Trinidadian Moruga Scorpion peppers that are reportedly “so hot they have been known to cause heart attacks,” according to the Daily Express in 2014. And in 2017, the now-defunct Pizza for Life, located in Benton, Arkansas, dared its customers to finish a whole pie topped with 20-plus fiery peppers in Randy’s Pepper Pizza Challenge.

As gastronomically lethal as their own entry in the category sounds, the Mikey’s Late Night Slice team keeps looking for new peppers to make it even worse, Biundo admits. “Each time a new ‘hottest pepper on Earth’ was declared, we’d add it to the mix and run the special again,” he says. “It started with Ghosts. Then we added Scorpions, then Carolina Reapers. Currently, the hottest one out there is something called Pepper X. But it’s not readily available commercially yet. The Reapers alone, the hottest in the mix, are about 2 million on the Scoville Scale. To put that into perspective, a jalapeno pepper is somewhere around 4,000.”

So what kind of brave soul—or insane person—would even take a single bite of a pizza that tastes like the fires of Hell itself? “It turned out that masochists would come out of the woodworks to meet the challenge or, worse, to casually enjoy it somehow,” Biundo says.