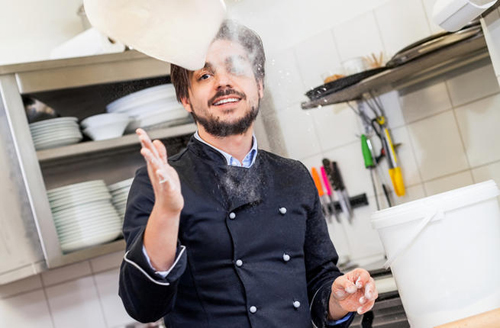 The U.S. Pizza Team's biggest rivals, The Italian Pizza Team, are heading to Dubai for the 20th edition of the Dubai Shopping Festival.

According to albawaba.com, three pizzaiolos, who between them share more than 50 years of experience in pizza acrobatics, have been invited to Dubai by the theater company, Saltimbanco Italiano, for the festival.

From spinning the pizza dough on one finger and tossing it up in the air to letting it glide over their shoulders, the trio has many pizza tricks up their sleeve.

Danilo Pagano, a certified pizzaiolo and founder of the team with more than 30 years of experience in pizza acrobatics, says that what started out as a game became a serious undertaking when the Italian pizza makers saw their customers enjoying what we were doing.

Although no one knows exactly when the discipline began and who officially started it, Pagano said he went on to encourage his friends to formally organize themselves as a national team of pizzaiolos in 1990.

Read more about the Italian pizza acrobats and their mission to bring pizza fun to the Middle East.