In the early 1990s, the Bills weren’t the only Buffalo institution to gain national notoriety. Until then, Buffalo wings existed only as a regional delicacy. Then McDonald’s added Mighty Wings to the menu in 1990, and KFC experimented with wings of their own in 1991, but with only mixed results. It wasn’t until 1994 that chicken wings found a home: Domino’s began a national advertising campaign featuring a flying buffalo to promote adding wings to pizza orders. “When Domino’s featured its ad with the flying buffalo, it put the chicken wing in a new stratosphere, and it has never looked back,” says Richard Lobb, spokesperson for the National Chicken Council in Washington. 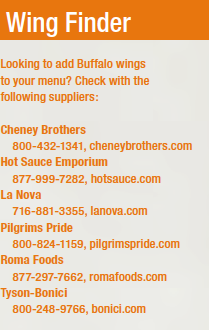 Today, many pizzeria owners find that wings are a natural fit on their menus. “Wings, pizza and beer are the perfect combination, really,” says Corey Balzer, owner of American Pie Pizza Company (americanpiepizzaco.com), with 12 locations in Central Florida. “It’s easy food to eat at events like a Super Bowl party because it can be picked up and enjoyed by the masses.” The National Chicken Council estimated that more than 1.25 billion wings were consumed during Super Bowl weekend in 2010—but that weekend accounts for less than 10% of the 13 billion chicken wings sold annually.

However, there is a downside to this popularity: The overwhelming demand for chicken wings has caused chicken wing prices to fluctuate more than a roller coaster at Six Flags, and the peak always comes just before the big game. In 2009, Sam Musolino, owner of Sammy’s Pizzeria in Niagara Falls, New York, made headlines across the country for trying to lead a chicken wing boycott. Musolino told local and national news affiliates that the 40-pound box of wings he normally buys for $46 jumps to $85 before Super Bowl Sunday. According to the U.S. Department of Agriculture, the average wholesale price of wings in 2009 was $1.47 per pound, up 38% from 2008 (over the same period of time, the average price for a boiler chicken went down 2.6%). The trend has continued into 2010, with chicken wing prices fluctuating between $1.75 to $1.65 per pound, while boneless chicken breasts have held steady at $1.56 per pound.

The giant winged buffalo provided the first introduction for most of the country to spicy Buffalo wings, but consumers still needed a way to taste them at a local pizzeria. Fittingly, it would be a Buffalo icon that would take the wing national. Joe Todaro Sr. established La Nova Pizzeria (lanova.com) in 1957, well before Buffalo’s Anchor Bar first began serving Buffalo wings in 1964. La Nova established itself as Buffalo’s most popular pizzeria, with recipes passed down through the Todaro family, who added wings to their menu in the ’70s. Joey Todaro III later latched onto the Buffalo tradition of combining wings and independently owned pizzerias. “We sold the most wings out of every pizzeria in Buffalo, and I came up with the idea in the late ’80s and early ’90s to try and sell chicken wings to other pizzerias throughout the country, never knowing it would be this big,” Todaro recalls. “At the time, the wing was the cheapest part of the bird; now, it’s the most expensive. Who knew what we were creating?”

Traditionally, wings were used to make chicken stock and little else, but Todaro faced little opposition when it came to changing people’s perception of the wing. “Growing up here in Buffalo, it has always been a popular item, so I had faith in it,” Todaro says. “I didn’t know it was going to be like this. It has been accepted by pizza operators very kindly; just about every pizzeria has chicken wings now.” Today, La Nova’s wing business brings in $30 million per year in revenue. Over the last year, Todaro says he has seen an increase in demand for boneless wings, which are made from the breast and are cheaper, but he believes the bone-in wing has developed a following that simply can’t be replaced by boneless. “We have pushed our boneless well, but people still love their chicken wings, and they are still in demand. It’s unbelievable since the price has risen so high,” Todaro says.

Mike Pullano, co-owner of Pullano’s Pizza (pullanos.com) in Glendale, Arizona, began serving wings in 1987 due to the urging of some friends who grew up in Buffalo. Today, wings are a staple on the Pullano’s menu, expanding beyond the traditional spicy flavors to include raspberry chipotle, jerk seasoning and chili limón. However, the traditional hot flavor remains the top seller. Pullano says his “always fried, never frozen wings” remain a staple on his menu, but he cautions operators looking to add wings to their menu for the first time. “They’re hard to make a profit on, because the prices have gone up and continue to fluctuate,” he warns.

The question for operators has become, how can I make money on a product with such a volatile price point? In addition, the market for wings has expanded to include fast-food operations and even convenience stores, with 7-Eleven debuting its line of impulse buy wings in 2009. With the market seemingly saturated beyond demand, the customer needs to know that a superior product can be found at your establishment. For Pullano, his ability to serve fresh wings and signature sauces sets him apart. “Everyone has added wings to the menu, but they aren’t going to be as good if they aren’t fresh,” he explains.

Bundling wings with pizza can also increase sales. La Nova points to its wing combo strategy as a tried-and-true method for moving wings. Offer a large one-topping pizza with a single order of wings in a combo deal without a coupon. This puts the focus on the product without sacrificing your ticket average. 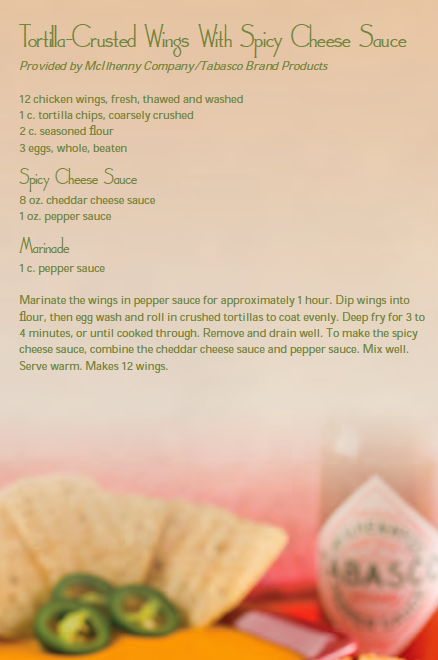 Cost Worth the Reward

Though offering wings has its challenges, they continue to be a customer favorite. At American Pie, even on a diverse menu that expands beyond New York-style pizza to include flatbreads, calzones, salads and pasta, wings generate 10% of menu sales, and are the No. 2 appetizer behind garlic knots (which retail at $2.99, compared to $7.99 for 10 wings). Despitea high price point, the decision to add wings to the menu was an easy one for Balzer, and he recommends that any operators who might be on the fence embrace wings. “I think it’s the perfect complement, because it’s not going to take a lot of room in the inventory, like a dessert might,” says Balzer. “When people call in orders, it’s an easy upsell to add wings to the order.” There is no need to transform your kitchen by adding wings, either. American Pie, for example, features fresh wings that are parbaked beforehand—then the wings are sauced and passed through the pizza oven when an order is placed.

Balzer says he has seen a few flavor trends appear over the past few years. The Hot Italian Garlic is the house special and top seller, but customers demanded an even hotter menu item, so an extra-hot flavor was developed using infamous ghost chili, certified by the Guinness Book of World Records as the world’s hottest pepper. “We dilute it down with some butter and a few other spices, but it’s still like lighting your mouth on fire,” Balzer laughs.

The consumer’s need for heat has been equaled by desire for a healthy chicken wing. Balzer notes that in the past year sales of chicken wings have gone from 70% fried to a 50-50 split between fried and baked. According to American Pie’s nutritional information, baked wings have 150 calories and 12 grams of fat less per 10-wing serving than the fried variety.

Whether they are fried, baked or boneless, consumer demand has made a permanent home for chicken wings on pizzeria menus across the country. The dramatic price shifts are an issue for which operators will have to adjust their budgets. “The only way they are going to be able to solve that is to make a chicken with four wings,” Pullano laughs.

The chicken wing serves many roles on the menu, from tantalizing appetizer to an option for nonpizza eaters. The opportunity wings present for an upsell and in combo packages makes it a viable option on any menu regardless of price.

Jacob Threadgill is a PMQ intern.