The secret to successful marketing is knowing who your customers are. It seems like such an obvious statement, but often is forgotten in the process of determining where your advertising dollars will be spent.

Windmill Pizza Paradise in Brisbane, Australia, offers a good lesson in knowing whom your market base is and how to market to them. With a majority of their customers being young backpackers and tourists, they have focused their concept and marketing around this fact and are seeing quite a bit of success. Through selling slices, which isn't that popular in Australia, out-of-the-ordinary operating hours and creative marketing, they have found their market and are doing good business.

Rodney and Darren Maller opened Windmill Pizza Paradise three years ago in an area of Brisbane known for its many hostels and backpackers. In all, there are six hostels within walking distance of the pizza shop. Young backpackers are known for being careful with money because many have only a set amount with which they try to get as much entertainment and travel as possible. It's no secret that pizza is probably the most popular fast food amongst this young group. Knowing that backpackers and travelers in the area would be looking for a good deal, Rodney decided to sell slices.

"These guys (backpackers) are looking for a lot of food at a small price," Rodney says. "We decided that slices would be a great idea for a pizza shop with this kind of market. Many of these backpackers tell others about good places to eat as they travel and because we have late hours, filling slices and good food, word has spread about us in their circles. We have slices in the hot box any time our doors are open. We are open 4 p.m. to 4 a.m. Monday through Wednesday and 11:30 a.m. to 4 a.m on Thursdays.  On Fridays we open at 11:30 a.m. and don't close until 4 a.m. on Sunday.

Our customers are usually the type that stays out late and when they get hungry there aren't too many places open to eat except us, so we get all of the business. On weekends we're open until 6 a.m. We just don't get enough traffic by here to justify opening in the daytime.

"We usually try to keep four or five pizzas in the hot box," he says. "The pizzas are made half-and-half, meaning half will be meat lovers and half vegetarian along with others. We rotate through about five different pizzas and the meat lovers and supreme are the most popular, but you can never go wrong with pepperoni. All of our slices are $4 (Australian). I don't see a need for combo meals when they will usually order a drink anyway. The great thing about it is we only have to sell three slices to get our money back. Our pizzas are 16" and if we sell the whole thing, that's $32 (Australian).

"To keep the pizzas from drying out, we keep water in the hot box. There is no need to reheat them because the display case holds them at an optimal temperature."

A lot of their business is takeaway. At night, they roll up the front doors opening the counter and display cases up to passing traffic and those walking back to hostels. Rodney and Darren are looking into remodeling some of their space and opening up more dine-in business. "There is a shift in the inner city here to and people are dining out seven nights a week," Rodney says. "To keep up with the times and this market, we are changing with them." 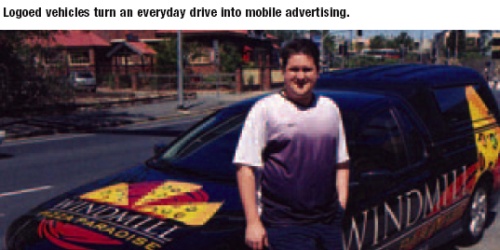 Knowing their customer base is coming from travelers, Rodney and Darren keep their marketing very localized. One of the newer forms of advertising they use is a television advertising strategy by VidEx. What they have is a television monitor in local service stations that constantly play ads for local businesses. As customers are standing in line, they watch the constant streams that are displayed. Windmill pays $200 (Australian) per month for a 30 second ad that runs every ten minutes. The ad uses food photos and images of the pizza shop, which the company helped put together for them. "The station is just around the corner and we noticed when we started using it that people were coming in saying they had just seen up on the screen in the station," Rodney said.

Windmill Pizza Paradise allocates 5 percent of sales to advertising. Of this, they also do some advertising in a circular aimed at the local community and business. They run a 1/4 page ad for $750 (Australian) per month. "Advertising is expensive here in Australia and New Zealand," Rodney says. "But I don't look at it as a cost, I look at it as an investment. McDonald's spends millions on advertising, but look at how much food they sell. I also do flier drops in the neighborhood every three weeks to capture the local business, but I have other ideas too."

One of those other ideas is a plan to launch his own four-page newsletter. "Rather than me pay for my advertising, I have decided to put out a small newsletter for backpackers and include information about the area and places to see along with some ads for local businesses that would interest them. This way, other businesses pay for the advertising, and I get mine for free. When advertising is expensive, you have to come up with creative ways to get the most for your money. Another thing I am doing is a gift certificate program with local real estate companies. A lot of people are starting to move in here, and I want to be the first place they go."

It is no doubt that the backpackers and tourists in Rodney's and Darren's area are their bread and butter. To maximize their advertising impact, they have focused on marketing to their immediate area. Knowing their customers' habits, such as looking for good food, and lots of it at a good price, knowing that they are nocturnal and stay out late and providing services like the newsletter, they have found a perfect formula for capturing the customers that are not familiar with the area. This can be a good lesson for any area, whether it is an industrial area, office area, strip mall or suburban area. When you know who your customers are, or should be, target your efforts on getting them and leave the rest to someone else.