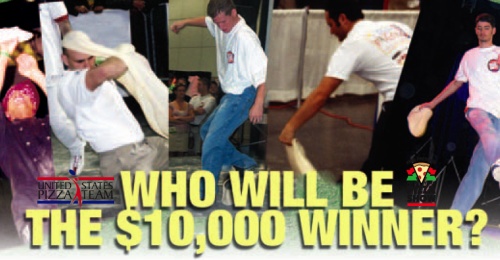 Who will win $10,000 in the Food Network Challenge: Pizza Battle?

This event will air March 20, 2005 10 p.m. ET/PT on the Food Network and again on at least four other dates (see pop-out box). The Food Network Challenge: Pizza Battle will feature five pairs of U.S. Pizza Team members (past and present), with one celebrity chef and one acrobatic dough tosser, battling it out to see who has the best combined team. The event took place November 12, 2004, in Cleveland, Ohio, in the Food Network Celebrity Theater and was quite an event. For the second time in two years, the U.S. Pizza Team will be featured on national television as a one-hour special. The publicity opportunities that have emerged since creating the U.S. Pizza Team are seeming endless.

The U.S. Pizza Team is traveling to Italy for the sixth year to compete in the World Pizza Championships and the Food Network has timed the showing of the Pizza Battle to coincide with this event. Now we have publicity opportunities and pizza teams coming out of our ears. In those short six years in Italy, we have earned two gold medals in individual acrobatic dough tossing, a gold and a bronze medal in dough stretching, a second-place finish in the culinary event, inspired an independent film ("The Pizza Movie") and now our second feature on the Food Network.

While American Idol launched Kelly Clarkson, Clay Aiken and Fantasia to stardom, the U.S. Pizza Team has spawned a new group of professional acrobats made entirely of former USPT members. Silar Chapman, Michael Shepherd, Tony Gemignani, and Joe Carlucci have independently formed The World Pizza Champions and travel to local events tossing dough in addition to creating even more support and interest in the U.S. Pizza Team and as a way to continue creating publicity for their pizzerias.

Michael, Joe and Silar got their start by trying out for the U.S. Pizza Team. Through the support of our sponsors and PMQ, they learned how to compete in a much larger arena and in the process, saw publicity and sales for their stores skyrocket. After seeing their humble beginnings and where they are now, we couldn't be prouder for helping them get there. Now it can be your turn.

The U.S. Pizza Team holds its tryouts in individual acrobatic dough tossing, largest dough stretch and fastest pizza making at the New York Pizza Show in New York City on November 1-2, 2005. Remember November! Each year, when winners are announced, they become local and national stars appearing on shows like The Best Damn Sports Show Period!, CNN News, Good Morning America, CBS's The Early Show, and the Food Network's World Pizza Challenge, in USA Today and too many local news broadcasts and papers to mention. Want to be the next big story? The next contestant on a Food Network special?

This is just part of what happens. Many former U.S. Pizza Team members have experienced so much popularity that they have gone on to open second and third locations (look for the upcoming article on two-time USPT member Sean Brauser in PMQ). For information on how you can tryout for the team, enter U.S. Pizza Team events or be part of the team, call 662-234-5481 ext 125 (www.uspizzateam.com). You can also make the 2006 team at the Wisconsin Restaurant Expo in Milwaukee on March 14-16, 2005. There will be an individual acrobatic dough tossing competition at the show and the winner earns a spot on the 2006 USPT. In addition to the acrobatic trials in NYC, there are other sanctioned events where you can make the team along with opportunities to earn your spot as a culinary team member. Two culinary spots are earned at the Pizza Pizzazz competition each year in Columbus, Ohio. The SOFO Food Show also crowns a winner. Email caroline@pmq.com for details. Who knows where the U.S. Pizza Team can take you.

The Food Network Challenge Pizza Battle airs as the 2005 U.S. Pizza Team travels to Salsomaggiore, Italy to take on the world in the official World Pizza Competition. Who will win the $10,000? You'll have to watch to find out.

Five teams meet at the Great Big Food Show in Cleveland to show off their tastiest pies and throw some dough.