Who is the father of American pizza? - PMQ Pizza Magazine

Who discovered America? Who was the first President of America? You know the answer to these; Christopher Columbus and George Washington. You were taught this information in school and it's something you should know if you live in America, but what do you know about the origins of American pizza? Who was the first to open a pizzeria in the U.S.? Whose pizzeria has been open the longest and where are they?

I have to admit, I am a History Channel geek and a big fan of Paul Harvey. I forget what I was watching, maybe it was the history of the hotdog or toothpick or something like that, but I got an idea. Why not do one of those History Explorer things for pizza. The PMQ staff was scheduled to go to New York and I knew that was where it is commonly believed that pizza in America was born. Well, like Paul Harvey says, "Now, let's hear the rest of the story."

According to documented history, Lombardi's was the first American pizzeria. Pizza didn't gain its popularity until just after World War II (see Pizza's History at https://www.pmq.com/mag/ 2003winter/pizzatypes.shtml), but Lombardi's, opened by Gennaro Lombardi, began selling pizza in New York City in 1897, so you might say Gennaro is the father of American pizza. Lombardi's was originally a grocery, but it soon became a popular stop for workers looking for something to take to work for lunch. Gennaro started selling cheese pies, which were wrapped in paper and tied with a string, and the many workers of Italian descent would take them to the job site.

Gennaro had a paesan from Naples who had immigrated to New York and made pizza for him for over 25 years, but in 1924, his pizziolo left to go into business for himself. The business remained open and continued to sell pizza. Gennaro's son, John took over after Genarro passed away and the business eventually went to Genarro's grandson, Jerry.

Over the years, Lombardi's continued to sell pizza, becoming a cult-like Mecca for pizza enthusiasts. They were featured in books, magazine articles and newspapers from all across the country. Locals continued to go there for the great pizza, but a new breed of customers, yuppies, also started to frequent the restaurant. The neighborhood took a turn for the worst and in 1984, Lombardi's closed its doors. In 1994, John Brescio, who was a childhood friend of Gennaro's grandson, Jerry, started talking to Jerry about reopening Lombardi's and in that same year they did, but not in the same location. They moved a block down the street to 32 Spring Street and that is where I met up with John.

"My grandma used to make pizzas at home and I wanted the same kind of pizza," John told me as I folded my oversized slice and let the olive oil drizzle down my elbow. You know you've been to a true New York Pizzeria when your notes have oil and sauce stains on them from the interview. This stuff was good. "I wanted to keep things the way they were, so we had the original oven moved from the old location and put in here. I don't make as much money here as I could, but I wanted to keep the quality and things the way they were. I want people to enjoy the food and have a good time.

"This area is about six blocks north of Little Italy, but I spent most of my time here. This building is at least 100 years old and all I did was take the plaster off the walls, but it isn't the name or location that makes you. When people come here, they are expecting something good, so I gotta give them something good. If you don't have a good pie, the name and history mean nothing." 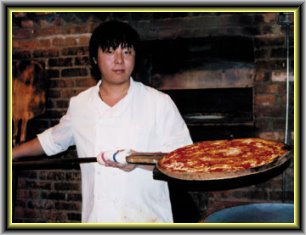 The oven he speaks of is a coal-fired oven. This baby burns at 800°F to 900°F. Pizzas only take about three to four minutes to cook and they can only fit about seven pies in at once, but with the speed the oven tenders have to work and the cook time, this is plenty of capacity. I asked John what it was about New York pizza that makes it so different. "Hey, I hear it's the New York water. Is there any truth to this?"

"Maybe it's the water," John laughs. "Or maybe it's just New Yorkers learned to make pizza the right way. We only use fresh Mozzarella, Ricotta and Romano cheese. I have a guy here in New York who makes our Mozzarella fresh everyday. You gotta stay on top of things to be successful and we're doing okay."

Remember that pizza maker who left Lombardi's in 1924? Quoting Paul Harvey, "And now, the rest of the story." That pizza maker was named Anthony Pero and he left Lombardi's to open Totonno's Pizzeria in Coney Island. If I was going to get to the bottom of the story, I was going to have to visit this place. I learned through a local take-away menu printer, Michael D'Agostino from Takeout Printing, that Totonno's had opened on the Upper East Side on 80th Street and that would be my best shot to get in touch with them. This is where I met up with Larry Goldberg and David Pleger, who are the current owners.

"Anthony Pero and Gennaro were friends in Napels," Larry says. "Anthony was a baker and when he came to New York, he convinced Gennaro to let him make pizza. He worked for him for 20 years, saving his money, and opened his own pizzeria in Coney Island. Back then, getting from the city to Coney Island was next to impossible.

"Back then, Anthony only made so much dough for the day. When it was gone, that was it. Ask any of the old taxi drivers who the Pizza Nazi was – It was Anthony. Because the ovens cook so fast, you get some small burn spots on the bottom of the crust. That's New York pizza, but if a customer would come up to the counter and say something, Anthony would take the pizza from them and tell them to get out because he had plenty of people who wanted it."

Talking with Larry and David, I asked what their connection was with Anthony Pero and if this was the same pizza he served. "We grew up eating Totonno's pizza," Larry says. "Anthony died before World War II and his son, Jerry Pero, took over. Jerry didn't have any kids before he died so the business went to Anthony's niece, Louise Ciminieri. Louise's husband, Joel had worked for Jerry and he and Louise kept the Coney Island location open.

"We had talked to Louise for a long time about opening another Totonno's. Eventually, she agreed when we absolutely swore to do things exactly the way they did at Coney Island. We had a mason build an exact replica of the coal-fired oven and opened in 1997. The oven is the key. It burns at about 1,000°F. There are only about two guys in New York who still deliver coal and the only reason we got away with it was we were grandfather claused in because this was an old restaurant that already had a coal oven in it. We took that one out and had the replica built. All of our pizziolos are still trained at the Coney Island location. Our dough is never refrigerated and made for use each day, just like Anthony did. If there is any left over, it is thrown away."

I ate some Totonno's pizza – and ate, and ate. Steve Green and the PMQ group were with me on this one. Steve, who I have had the pleasure of eating pizza with all across the globe, is hard to impress when it comes to pizza. Hey, we eat a lot of it. This pie, especially the Bianca (white pie), almost brought a tear of joy to our eyes. I can't say if Lombardi's or Totonno's is better, but I can say if you are in the pizza business and in New York, go to both of these places.

The original Totonno's location in Coney Island only sells pizza and drinks. The new location offers pastas, salads, entrees and appetizers. Pizza is about 50 percent of their sales and they can seat 100. All I tried were great. They do deliver, by bicycle, between 68th and 95th Streets.

After eating at both, I revisited my original question; Who is the father of American Pizza? Here is my best conjecture. Genarro Lombardi is the founder of the American pizzeria. He had the first one on record, but who is the father of American pizza? Well, Anthony Pero was one of his first pizza makers, as well as John Sasso, even though Genarro was making pizza before they came. John started John's Pizza on Bleeker Street, which is another well-respected pizzeria amongst New York pizzeria owners. While Lombardi's was first, they did close in 1984. That gave them 87 years of continual business. Totonno's has been open continuously for 79 years, but they have never closed, so they could break the record if they are open continuously for eight more years, even though Lombardi's will have more total years in business. Lombardi's was there first and they trained many of the best pizza makers. I guess the answer is there for you to decide. I will be traveling to New York several more times over the next few months and will be visiting John's Pizza, Grimaldi Pizza and Pachi's. These are the guys New York pizza makers respect the most. We'll find out and report more in future issues. "And now you know the rest of the story."