Where will the next stage of pizza’s evolution begin? Look to the East. - PMQ Pizza Magazine 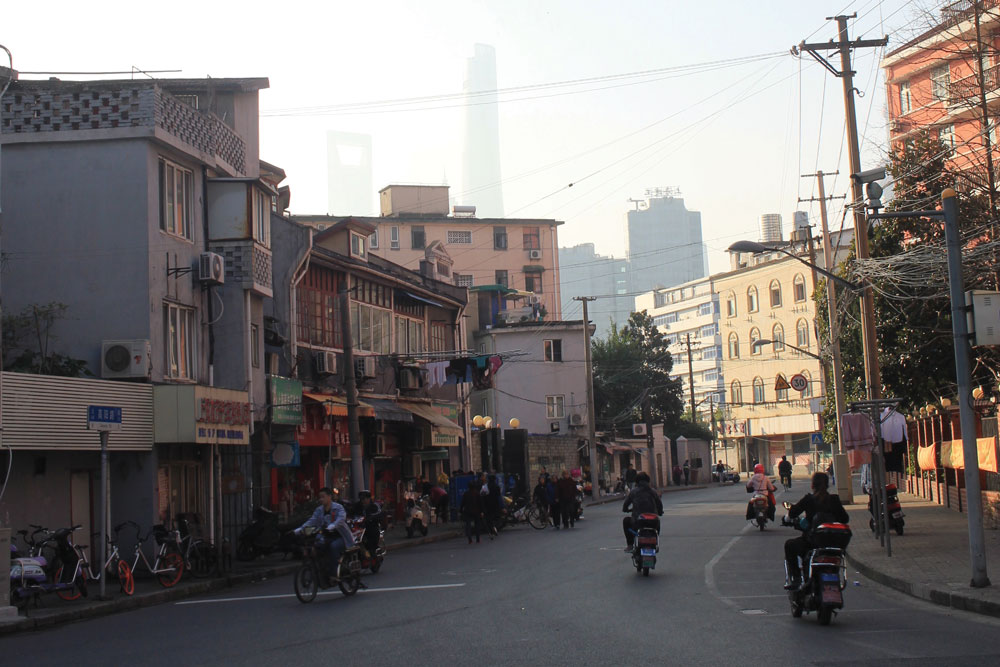 China is a paradox. Although viewed as a “communist country,” it’s actually a mecca of capitalism and entrepreneurial spirit. The massive city of Shanghai is deeply rooted in a legacy of ancient traditions, yet it’s also a forward-thinking city of innovation. It matches up perfectly with pizza: respectful of tradition, yet always innovating.

Shanghai has long been one of the most international of all Chinese cities—many Chinese citizens outside of Shanghai don’t consider it to be a true Chinese city at all. What better place in Asia to hold a pizza competition than in this cultural crossroads? For the second straight year, the U.S. Pizza Team tested its mettle against culinary minds from around the world at the Chinese Pizza Championship. Sponsored by PMQ China, the contest was held in early November at FHC China, the largest food show in Asia. Answering the 2016 call were competition veterans Michael LaMarca of Master Pizza in Cleveland, Ohio, and Dave Sommers of Mad Mushroom in West Lafayette, Indiana, along with two first-time visitors to Asia: Jason Samosky of Samosky’s Homestyle Pizzeria in Valley City, Ohio, and Chris Mallon of Nashville, Tennessee.

Competitions are one of the primary methods by which these four pizza masters collaborate, learn, and improve their product to stay successful in a competitive market. “Being a member of the U.S. Pizza Team has given me opportunities to travel all over the United States as well as the world, literally,” LaMarca noted. “I would have never been able to say I went to China or Italy if I had not joined this team.”

A Quest for Food

After landing in Shanghai, four of us took a cab to the Orange Crystal Hotel in the area known as The Bund. Mallon would join our party later, opting, against all reason, to self-navigate the Shanghai metro system to the hotel. “There was a moment of panic—where I didn’t know which train to take—that I thought I might be permanently lost and wandering Shanghai forever,” Mallon recalls. “Fortunately, I ran into the one guy out of a thousand who spoke really fluent English, and he told me where to go.”

Wandering the streets for dinner that evening, the two veterans enjoyed watching Mallon and Samosky view China with fresh eyes. Well-lit produce stands shone brightly in the night with a range of colors. Fresh duck hung upside down on a display rack. People manning cramped hardware shops and foot-therapy joints peered out from windows and doorways. Small “phantom” open markets, packed with fresh fish and other delicacies, popped up after dark, only to vanish without a trace by morning.

We settled on convenience store food, and, pushing aside our reservations, tried a variety of mystery meats, oddly flavored chips and snacks, plus Chinese versions of American products that just didn’t quite taste the same. Circling an outdoor table in the cool night air, LaMarca marveled aloud at how surreal it felt to be on the other side of the globe—and how pizza had the power to bring so many people together in so many distant places again and again.

“Being a member of the U.S. Pizza Team has given me opportunities to travel all over the United States as well as the world, literally. I would have never been able to say I went to China or Italy if I had not joined this team.”
—Michael LaMarca, Master Pizza

In what would become a daily ritual, I ran into Chris Mallon on a sidewalk the next morning while searching for breakfast. At 6’4,” with a full beard, waxed mustache and eccentric sense of style, Chris wasn’t hard to spot in a Chinese crowd. Typical of Shanghai’s inner city, the neighborhood was a mixed bag of slums and modern developments. China’s rapid advancement since Nixon opened trade in the 1970s meant the nation more or less jumped in fits and spurts from the 19th to the 21st century, skipping the 20th almost entirely. This rapid advancement has created an unusual generational gap. The slum streets teemed with mostly middle-aged and elderly people on foot, with humble, drab clothing and a distinct lack of cell phones that matched their lack of urgency. In contrast, the youth can be spotted in fleeting glimpses, always on their way to or from somewhere else. They often tooled about in flashy Western cars, with stylish haircuts, trendy clothing and smartphones glued to their ears.

Back on the streets, one vendor caught our eye. Working with a coal-fueled, flat cooking surface, she laid out a piece of paper-thin dough and liberal amounts of oil. She added Cantonese peppers, cilantro, scallions and a sauce that, due to the language barrier, would remain a mystery. “It starts almost like a crepe,” Mallon said, taking a bite. “It’s a little bit like a pizza. It’s flaky and crunchy. I could eat these all day.”

We wandered on through narrow, junky alleys as a myriad of voices and the cries of babies floated through thin walls. Catching glimpses of laundry, rusty bicycles, old ladies surprised at seeing Westerners in their alley, and citizens in their homes going about their day-to-day rituals, this was, for us, the real China. 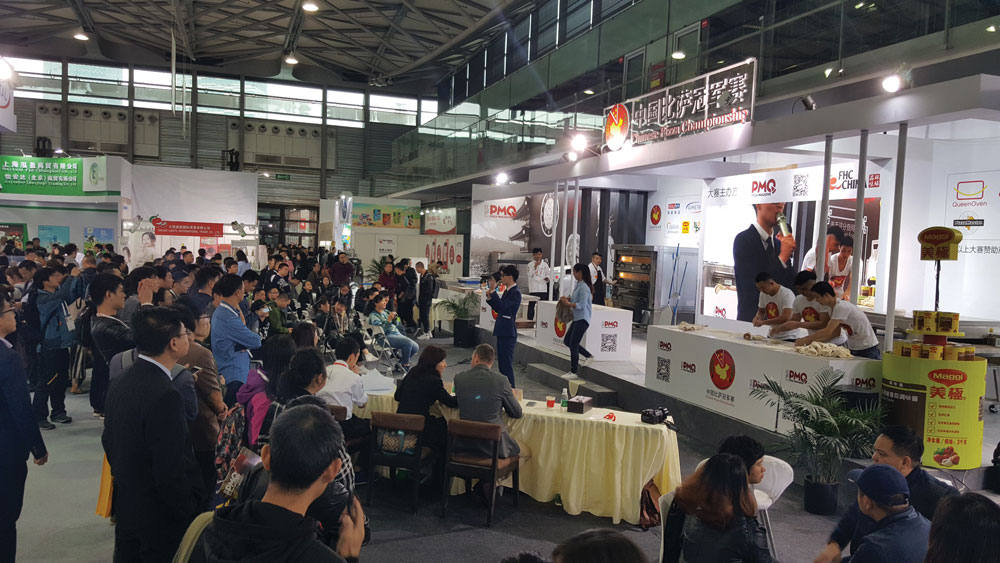 Good pizza starts with good ingredients, so a trip to the local Metro supermarket was in order. The Metro is a lot like a Costco or Walmart, with one glaring difference: the seafood section. Live fish swim about in large vats of water. Customers scoop the fish into their shopping carts with a net. Adjoining containers feature live bullfrogs, eels, crabs and turtles ready for consumption. It looks less like a supermarket than a zoo exhibit.

With ingredients in hand and prep finished, the USPT members were ready for competition the next day. Organized by PMQ China editor Yvonne Liu, the Chinese Pizza Championship has grown from a humble contest at a single booth into a massive presentation on a rock star-sized stage complete with giant video screen. It draws large crowds who wait in line with tickets to get a slice of competition pizzas.

Even many of the Chinese competitors look at the Americans with awe and wonder. In China, pizza isn’t really considered an Italian food; it’s viewed as an
American dish, and for them, seeing top U.S. pizza makers in action is a rare treat. “There are a thousand people taking pictures of everything you do,” LaMarca recalls. “It used to get me nervous and anxious. I try to block it out and focus on the pizza I’m making.”

Mallon went first, wowing the crowd with a pie featuring caramelized onion cream, roasted pork belly, shiitake mushroom teriyaki sauce, local Cantonese peppers and arugula. “The people of Shanghai seemed to be really into us, really accepting of us,” he says. “They liked our pies.” Samosky, navigating uncharted waters, made the one high-quality pizza he knew he could execute flawlessly: the Spinachi, topped with sausage, spinach, feta and Asiago cheeses, sunflower seeds and cranberries. The pizza itself became a celebrity on the spot, as a full circle of onlookers with smartphones surrounded it to get pictures.

Sommers created a pie featuring chicken mushrooms sourced in Shanghai, port wine cream sauce, roasted red and yellow peppers, and fresh mozzarella. He’d tied for third in last year’s competition but ran into a roadblock on his return visit. “I didn’t reduce my cream sauce enough,” he says. “The bottom bake was good, but it came out a little gooey on top.” LaMarca, meanwhile, baked up a “Figetaboutit” pizza, which has done well in other competitions. The sweet and savory flavors came from figs, honey-cured bacon, mozzarella, prosciutto di Parma, arugula and balsamic pearls.

The Next Stage in Pizza’s Evolution

After much number-crunching and double-checking, the final day of competition culminated in an award ceremony. Meng Xin Wen of China won the grand prize, while Japan’s 2015 Freestyle Acrobatic World Champion Takumi Tachikawa added a culinary medal to his resume by taking second place. From the American contingent, it was Samosky who took a medal back to the U.S. with a third-place finish. “The pizzas that took first and second were really, really good,” he says. “The scores were only a couple of points apart. I’m really, really happy.”

LaMarca views the competition as a course in international pizza. “The people are from very different regions of the planet than we’re used to competing against,” he says. “So some of the flavors and ingredients are really out there, and you’re, like, ‘Why would you put that on there?’ And then you taste it, and it’s, like, ‘Wow! This is crazy good!’ It’s flavors and techniques they’re used to, mixed with pizza techniques we’re used to, and it’s a nice combination. It takes this industry to a new level. It’s awesome. Hopefully, I can bring what I learned here back to America. And, hopefully, they can see what we’re doing in America and build it up here.”

Slightly overshadowing the competition was the U.S. presidential election, which took place during the event. The Chinese media had been covering the campaign for months. A palpable buzz spread through the crowd as the likely winner became clear. Amongst ourselves, there was speculation as to what the future holds for America and the rest of the world. But despite the uncertainty of geopolitics, one thing became clear to me: The next stage of pizza’s evolution will take place in China. Just as Americans took an Italian dish and made it uniquely our own, the Chinese will now take it to new heights of experimentation. The future of pizza in China is as bright as the Pudong skyline at night.