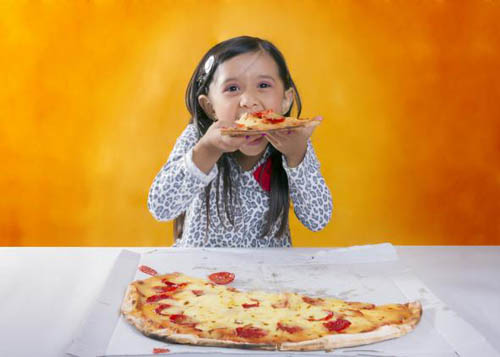 Recent articles detailing a study published in "Pediatrics" about kids and pizza claim that overeating of the popular food results in increased calorie consumption for youth. But some reports seem to put the blame on pizza itself instead of looking closer at the eating habit of youngsters,

This report by Slate.com strikes a bit more balanced approach quoting one study participant as reassuring parents that it's OK for their kids to eat pizza if they stick to one piece instead of three or four.

While overall pizza consumption is down among kids in the past decade, researchers found that when kids eat pizza, they eat too much in general.

Researchers emphasized there are healthier ways to eat pizza—homemade instead of Pizza Hut, for instance—and that parents could make small changes to improve their kids' diet. Children in this study, which tracked subjects ages 2 to 19 using Centers for Disease Control and Prevention data, netted 84 extra calories on days they ate pizza, and teenagers netted 230 extra calories over kids who did not eat pizza on that day.

Read more about the how parents can help children make healthier choices and still eat pizza.