What causes speckled pizza dough—and how to solve the problem. - PMQ Pizza Magazine 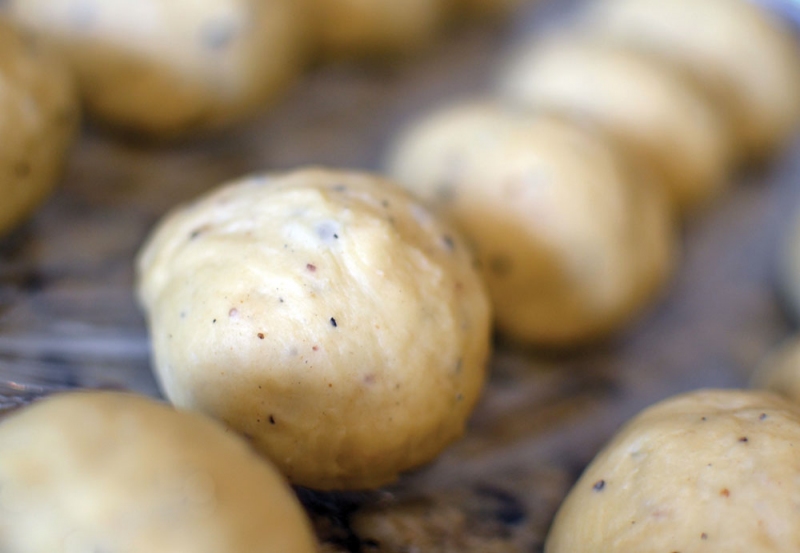 Q We recently made dough that came out speckled. Otherwise, it performed normally, and the crust didn’t taste any different. What happened?

A Speckling is caused by one of two factors. If you added a blend to the flour for vitamin and mineral enrichment, the speckling might be iron or rust spots due to the iron in the blend. The other possibility is oxidized bran particles. It’s easy to distinguish between the two. Carefully snip off several spots using scissors and place them on a magnet. If the bits are magnetic, the problem is most likely due to the iron in the enrichment blend, and you should discuss it with your flour supplier/miller. If the bits of dough aren’t magnetic, the problem is probably due to oxidized bran particles.

The latter seems to be getting more common, and I think it’s due to a change in the way wheat is milled into flour. Over the past several years, the flour extraction rate has crept up from about 76% (76 pounds of flour from 100 pounds of wheat) to 78% or more. This is also reflected in the higher ash content of today’s flour, compared to the flour of 25-plus years ago. The higher extraction rate typically leads to more bran in the flour. This is not necessarily a bad thing; bran and fiber are good for you. But when bran particles are exposed to air for a significant length of time (as in a dough being refrigerated or undergoing cold fermentation for a number of days) the bran particles become oxidized and turn a darker color, giving the dough balls a salt-and-pepper appearance. If you sell dough balls, that’s not a good thing, but if they’re for in-house use only, they’re perfectly safe to use. As you mentioned, speckling doesn’t affect the dough’s performance or the crust’s flavor.

So how do you prevent speckling? By oiling the dough balls immediately after forming them, you might be able to eliminate or diminish the problem. Placing them into individual plastic bags also seems to prevent speckling. Or you can ask your flour supplier or the milling company to recommend a flour slightly lower in ash content (and remember, ash content is an indicator of bran content).