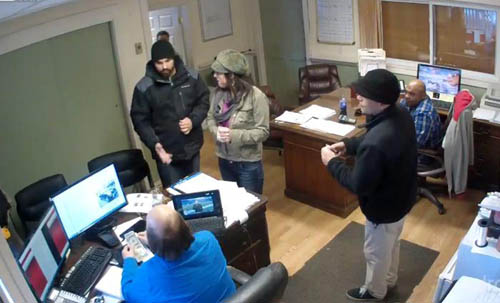 Being a pizza delivery man is a tough job. One look at the news confirms that it's downright dangerous. But a bunch of uncool car dealership employees in Massachusetts decided to make one unfortunate driver's day simply the pits. They hassled him ridiculously over a $7 tip — but in the end — justice prevailed thanks to a video-gone-viral.

Boston.com says car dealership employees in Westport, Massachusetts, got into a heated argument with a local pizza delivery man over $7, leading to Internet anger and a personal apology. The video, posted on Liveleak, begins with a delivery man returning $7 in cash to the dealership that he had thought was a tip. By the end of the video, one dealership worker threatens to “put my foot in your ass” and another says he will call the delivery man’s manager and get him fired.

The delivery man in the video is an employee at Palace Pizza named Jarrid Tansey, according to two employees there. Lianette Hernandez, a cook and cashier, and Adam Willoughby, a manager, confirmed the video came from an interaction at the nearby dealership F&R Auto Sales on Saturday.

Read more and view the video that lit the firestorm over pizza delivery man rights.