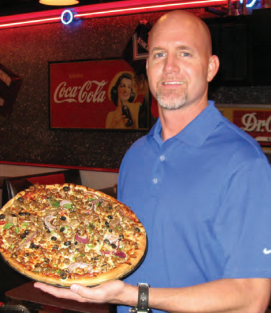 Athens, Texas, a small town southeast of Dallas that’s often debated as the birthplace of the American hamburger, also honors pizza as a community staple—especially at Rounder’s Pizza, an independent operation that has served up pan-baked delicacies for nearly 20 years. Earl Wilmeth, owner of the 1950s-themed pizzeria for the past eight years, has learned that his best marketing techniques include maintaining a community presence and, in a time when so many are looking for value, offering some convenient deals. With school lunch programs designed specifically to meet government requirements, rodeos where employees hand out free T-shirts, and a regular lunch buffet and a Tuesday dinner buffet that pack the house, Rounder’s has safely tethered its business to a community of eager regulars. But word of mouth brings hungry visitors to the door as well: Check out this shop’s online reviews and you’ll find that even self-proclaimed pizza snobs can’t dispute the quality of pies at Rounder’s. PMQ tracked down Wilmeth to discuss how all of these elements have made for a well-rounded pizza business.

Tell us about your school lunch program.

A couple of years ago, the state regulated all meals for school lunches, and it basically said outside food should be regulated. So we sent our product off to a lab in California and had it tested to meet the requirements for Texas. At that point, we were able to get in with area schools. We have one school we’ve been delivering to for three years, and another one for about a year. It’s a great deal, because we’ll deliver at least 120 pizzas at a time. 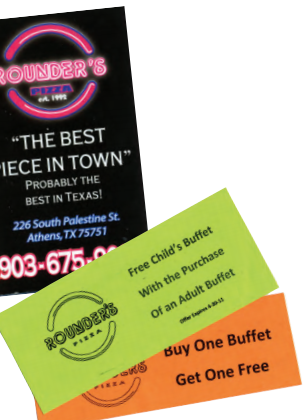 Absolutely. Any time you reach 300 to 500 students in a single day, some will show up at your doorstep that night or weekend. We’ve found that it’s a really easy and effective marketing plan. It’s not served out of the box in the classroom; it’s in the actual cafeteria line, so it’s getting to the whole student body. We have some schools that actually take attendance on pizza days because those are the days when the most kids are going to show up!

Do you send over only pepperoni and cheese?

Mostly, yes. But some schools will also serve hamburger and sausage pizzas.

Outside of schools, do you have a target demographic?

We serve a lot of 18- to 35-year-olds. We have a lot of young couples with young children. But we also have a lot of older regulars because we’ve been around for so long. We have people who come in at the same time and on the same day and order the same thing every week. We pride ourselves on knowing our customers and what they like. We literally put pizzas in when we see our regulars pull up in the parking lot. Most of our customers have been coming in for 10 to 15 years.

How do regular customers affect your marketing?

Our main traditional marketing is centered around specials and mailers. But we’ve been here for 20 years, so we don’t do a whole lot of that. The longer you’ve been open, the less you have to do to get people’s attention. We stay very involved in the community. Any time the school is doing something, we try to get involved. Our general manager goes to all of the schools and puts up flyers for specials on class parties, etc. We’re also involved with the local pro rodeo. We’re one of the main sponsors, so we send out our “Rounder’s Girls” in the crowd to hand out T-shirts. We’ll have a dozen girls handing out shirts and coupons. They’ll announce it several times over the night, too. As a result, there is a huge demand for our shirts. 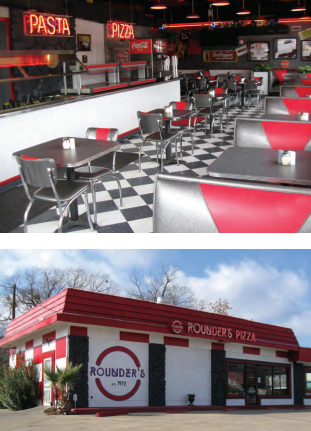 What do people like about the shirts so much?

When we originally started handing out shirts, we just put our logo on them, and that was fine. But we realized we were looking for a niche and we wanted to appeal to a younger generation. We give shirts away at events, but we also sell them year-round, and we sell a lot of them. Now it’s one of our biggest marketing campaigns. We wanted to make them cool, and now instead of just the logo, it has our slogan, “The Best Piece in Town.” We design them in various colors. People call in and order them.

Why do you offer a Tuesday night buffet?

When we started looking at nights to offer a buffet, we decided on Tuesday, because Wednesday is church night and Friday is already more than we can handle. Now Tuesday is tough to get into. We’re handcuffed by parking and seating right now—it’s a great problem to have!

We’ve incorporated a lot of Coca-Cola and ’50s-era artifacts, we keep ’50s rock on the radio, and we have black-and-white tiles and neon lights. From a service aspect, we don’t wait tables. But once you order, we’ll bring your pizza out and service your drinks. When you couple the atmosphere with the service, I think it goes over well. The feel of the restaurant was one of the things that originally attracted me to it. In my early 20s, I started frequenting this place, so when I found out that it was for sale, I immediately did everything I could do to take things over.

Do you use a lot of coupons?

I think coupons work. But, for us, the main thing is that you have to get someone buying first. We use coupons a lot, and we find that when you give something for free, they take it. But if you offer a free side item or a buy-one-get-one-free, it works better. For instance, we’ll give one free adult buffet when you buy one, or a free order of cinnamon sticks when you buy a pizza. You can either give your product away or you can gain sales.

Do you struggle with food costs on your lunch buffet?

My food cost is actually better on the lunch buffet. People’s habits change from lunch to dinner. At lunch, people have 30 to 45 minutes to eat before having to go back to work. That’s probably 90% of the people that come in. People just don’t have the time to come in and eat that much. We don’t offer a lunch buffet on Saturday. I talk with people who have “all day, every day” buffets, and they get killed with food costs. It’s all a matter of timing.

Any other buffet tricks?

One thing about a buffet is you don’t necessarily want to fill it all the way up, and especially not with high-cost items. We do eight different types of pizza, but we stick to the basics. If anyone asks for something special, we’ll put it out there, but there is definitely an art to it. When your lunch buffet closes at 2 p.m., you don’t want fi ve pizzas out there—you want one. It comes down to training the front staff and the kitchen staff to communicate. If you have five people in the house, you don’t want to throw in 10 pizzas.

How do you choose ingredients for your menu?

This is one thing that I’ve said forever: We don’t have price wars with the other guys in town. I’ll tell people straight up that we spend so much more on our product than anyone out there. We start everything from scratch every morning. At the end of the day, there are quantity shoppers out there and there are quality shoppers out there. We use the same cheese the shop used when it opened. We pay up to $75 a case when the market is high. We just grit our teeth and bear it. Our flour has gone from $4 a bag to $12 a bag and has settled at $8 in the past couple of years. So, yes, we spend more, but at the end of the month, we do more in sales because our customers know that whether they like our product for the sauce or the dough or the cheese, we’re not going to sacrifice the quality.