Was the Mafia Behind the Bombings of This Pennsylvania Pizzeria? - PMQ Pizza Magazine 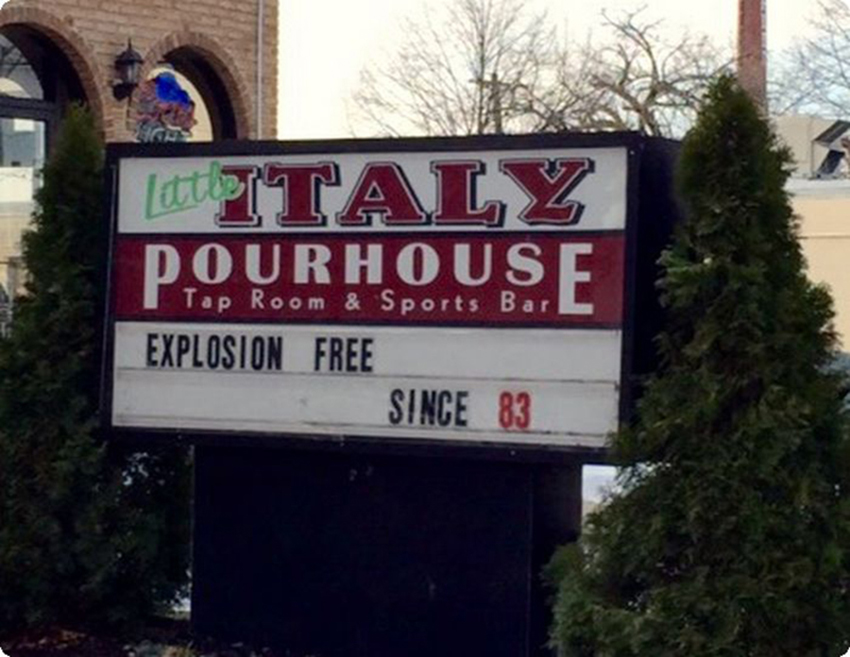 For a brief period in the mid-1970s, pizza-making was dangerous business at Little Italy Pizzeria in Pottstown, Pennsylvania. A series of bizarre—and, to this day, unsolved—bombings earned the restaurant considerable notoriety between December 1974 and October 1975. Now, more than 40 years later, the shop’s current owner—who was not affiliated with the business in the ‘70s—has sparked memories of the unsolved mystery with a hilariously tongue-in-cheek sign on the restaurant’s marquee that reads, “Explosion Free Since 83.”

Local journalist Jim Kerr recently called attention to the sign, which reportedly amused the locals, with an article in the Reading Eagle and posted a photo of the sign on a Facebook page frequented by Pottstown natives and longtime residents.

The mysterious Little Italy bombings began around Christmas of 1974. Late one night, after the pizzeria had closed, a bomb ripped through the pizzeria’s location at High and Beech Streets. Months later, a second bomb exploded in the pizzeria, and the owner, Biago “Benny” Esposito, shut the business down. He soon relocated Little Italy to the 600 block of High Street (its current location), where nervous locals eyed the new shop with wariness. Sure enough, yet another bombing rocked the building on October 21, shattering 88 windows in the apartment house next door, and residents’ worst fears had been realized.

A staff reporter for The Mercury, the local newspaper at the time, compared the locals’ situation to “living near a bulls-eye,” adding, “The neighborhood … had been humming for months with the residents’ fear of another sabotage. But when that hum climaxed into the roar of an explosion Tuesday morning, the owner of the little shop suddenly became an unwanted neighbor.”

That article quoted one resident as saying, “I’ve been wondering when we’d all be blown clear across to Adams Street.”

Intriguingly, police had received a tip and put Little Italy under surveillance on the night before the Oct. 21 bombing. But a disturbance call from Penn Village drew several police units away, and another report—of a man with a gun—drew the remaining patrols to another site. Moments later, after the stakeout had been abandoned, the bomb went off in Little Italy, marking the third attack in 10 months.

Understandably suspicious, local police reportedly administered a lie detector to Esposito, the pizzeria’s owner, although The Mercury does not report on the results. It does quote a police detective as saying, “We are not doubting what Benny said. It’s just that, after the third time, we simply have to verify the stories we hear.”

According to Kerr, “Rumors started flying around Pottstown that the explosions were tied to organized crime. I don’t know if that was ever proved, but Little Italy is mentioned in a 1980 Pennsylvania Crime Commission report about organized crime’s infiltration of the pizza and cheese industry.”

Citrino, Little Italy’s current owner, didn’t become involved with the shop until 2003, long after the bombings ended, according to Kerr. He put up the “Explosion-Free Since 83” sign as a joke. In fact, the reference to 1983 is misleading, since the place actually hasn’t been bombed since 1975. Citrino just liked the rhyme.

“At least once a week somebody comes in here and says, ‘You know, I remember when this place blew up,” Citrino told Kerr. “I just thought people who have lived here a long time would see that sign and get a laugh out of it and people newer to town might ask what it means.”

Read the article in the Reading Eagle here.