Want to learn about Chicago pizza? Look it up on Encyclopizzeria.com - PMQ Pizza Magazine 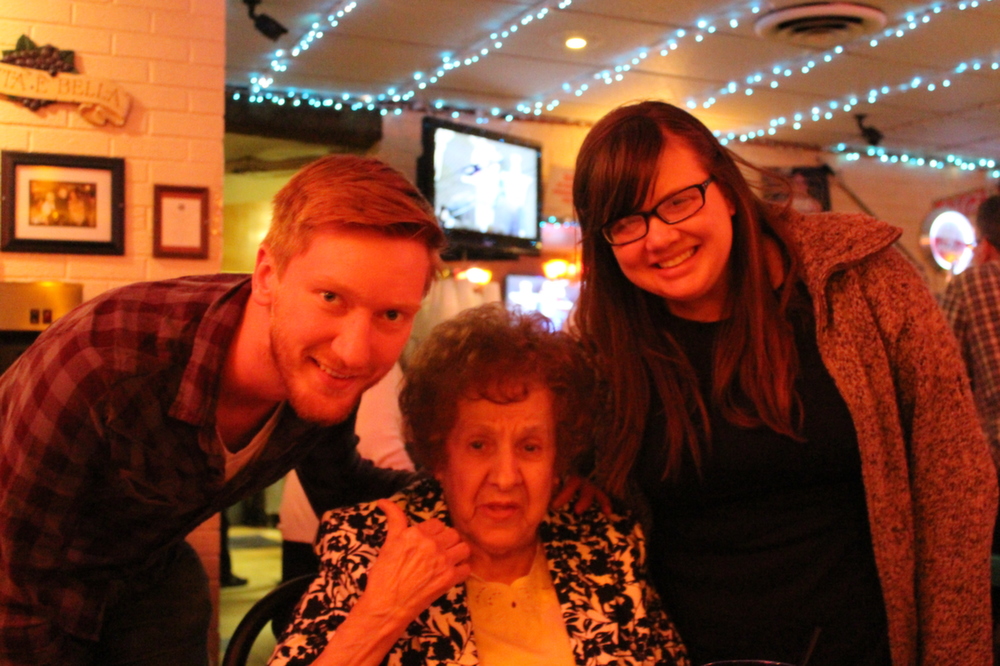 Stephen Beemsterboer and Erin Nederbo may be two of the biggest pizza fans you will ever meet. The Chicago natives love pizza so much, they developed an online encyclopedia in its honor. Encyclopizzeria.com launched Tuesday and “aims to capture the passion and story of pizza, with a special emphasis on its place in the cultural identity of Chicago,” according to the website’s “About Us” section. We chatted with Stephen and Erin via email to find out more about Encyclopizzeria, its origins and its goals:

PMQ: Where did the idea for the Encyclopizzeria come from?

Stephen: I’ve lived outside of Chicago since going away to college, and I’ve met a lot of folks from all over the world. It’s only natural to try to connect with people by showing some knowledge of the place they come from. Years ago, the first thing to come to mind at the mention of Chicago was probably Michael Jordan. Now, the most common topic is deep-dish pizza. This is really where the idea came from. I originally wanted to dispel the common misconception that Chicagoans only eat deep-dish pizza. It’s no secret—we are a pizza town. But what most outsiders don’t realize is that Chicago is home to its own style of thin-crust pizza, and, from my experience, that is way more prevalent than our iconic deep dish.

I was tossing around the idea for a while and was rather surprised that there weren’t any sites out there devoted to pizza in Chicago. The idea really just grew from there, especially when I got Erin interested in coming onboard. I think we could both easily see the potential—pizza is really a part of the culture of Chicago, and there are so many people to meet, stories to be told, and pizzas to be eaten. We are still in a position where we have only scratched the surface of what is out there! We also made the conscious decision to make Chicago pizza our core focus, while at the same time giving any interesting pizza story a slice of the pie, if you will.

Erin: Stephen and I met through Stephen’s older brother. We immediately bonded over Chicago and our love for our city’s unique local culture. The subject quickly turned to food—Italian beef, hot dogs, pizza. We both knew that Chicago’s pizza landscape went beyond deep dish. We also knew that a lot of people outside of Chicago didn’t know this. And we realized that there weren’t any websites dedicated to Chicago pizza. We thought this was unfortunate and kind of unbelievable. I had gone to college for creative writing and had been looking for a way that I could focus on writing about Chicago and its residents. Encyclopizzeria was the perfect way to do this.

PMQ: How does the Encyclopizzeria work? What information can get you from it?

Stephen: We want Encyclopizzeria to fill a void in the study and appreciation of pizza. There is plenty out there on how to cook your own pizza, where to find a pizza place, and what people are saying about the food, but not so much about the many charismatic faces who create, eat, and obsess over the dish. Of course, our site will feature guides, reviews, recipes, etc., as you would expect from a website devoted to food. But what you’ll also find is an in-depth study of the history and varying styles of pizza and an anthology of the different components of pizza culture in Chicago and across the world.

PMQ: So this won’t just be about Chicago pizza? What else will you cover?

Stephen: As born-and-raised Chicagoans, we are obviously starting with what we know and giving our city’s pizza the proper platform it deserves. That being said, we already started to expand to other regional styles even before we launched. We just wrapped up a recent trip to New York City to explore the pizza scene there, sampling various styles at a host of pizzerias and meeting some of the pizza players over there. We do hope to eventually cover other lesser-known regional styles and provide guides for finding the best pizza no matter where you are in the world. We certainly can’t do it alone, so we welcome other pizza enthusiasts to pitch their ideas to us.

PMQ: You must have a real passion for pizza to create a project like the Encyclopizzeria.

Stephen: For me, the love came to fruition as a result of this project. Of course, most people will list pizza among their favorite foods, and I guess the same could be said for me. However, until I started this project with Erin, I would have never been a self-described pizza fanatic. I just realized that I had so much fondness that I really didn’t consciously know was there. My fascination continues to grow as we meet more people, hear their stories, and taste so many different amazing pizzas. It’s hard not to fall in love!

Erin: Before starting this website, I liked pizza. As the website progressed and this project started to grow, I really have fallen in love with the food. Now, I’d say it’s my favorite food. I’m not sure I would have said that before we started this. There’s just something about the passion that it invokes in people and the stories that surround the food. Plus, there’s so much history that surrounds pizza. So much of the pizza is multi-generational. You really can’t find that with many other foods.

PMQ: Is deep-dish your favorite style?

Erin: Growing up, we always had well-done, thin-crust sausage pizza or stuffed pizza, which is similar to deep-dish but not the same. I really love deep-dish, but I can’t say that it’s my favorite style. That well-done, tavern-style thin-crust has to be my favorite.

Stephen: This goes back to my original impetus for starting the website, and in fact I can’t say that deep-dish is my favorite style. I think it’s similar to the concept of having a favorite band. For me, I will unabashedly admit that one of my favorite bands is Journey. Most people will say, “Oh! I love Journey! ‘Don’t Stop Believing’ is great!” and I will say, “Yes, but there is so much more than that!” I still love deep-dish pizza, much like how I like the song “Don’t Stop Believing,” but my favorite style is the Chicago thin-crust style. It is unknown to the casual fan of pizza itself. It is a pizza marked by a uniformly thin, crispy crust with ingredients hiding below the cheese, which is cooked on the well-done side and sliced into squares. My favorite is from Vito and Nick’s on Chicago’s Southside. I grew up with it and always loved it, but acquiring a broader picture of pizza styles has only increased my appreciation for their pizzas.

PMQ: What is the longterm goal for the Encyclopizzeria?

Erin: We’ve tossed around so many ideas—the website has been a labor of love. Stephen and I haven’t made any money on it. We have full-time jobs that are completely unrelated to pizza. All of the work we’ve done for Encyclopizzeria has been on our own free time. Longterm, if we can find a way to make a living off Encyclopizzeria, that would be a dream come true. I do hope that we can eventually publish a print version of Encyclopizzeria and tour throughout the country with that book. I also hope that we eventually are able to include video and audio content on our website.

PMQ: Part of the site includes a community area where people can interact and discuss pizza. Talk more about this area and how it will work.

Stephen: The idea of community as expressed on our landing page is meant to be reflective of many different aspects of the website. For instance, we are aiming to host regular meet-ups to bring people together to discuss and eat pizza. We also want to use our social media presence as a way to connect pizza enthusiasts from all around the world. While we may not have an official forum, there will be many ways to participate in the dialogue. Writers are always welcome to pitch their stories. Enthusiasts are welcome to review a pizzeria. We want people to tweet at us, write on our Facebook wall, send pictures to our Instagram, etc. We want the conversation to be everywhere, not confined to a compartmentalized forum. We want the conversation to be accessible to enthusiasts of any degree!

PMQ: Will the history section cover all of pizza's history or just American pizza?

Stephen: As the resident historian of sorts, I will admit that I am incredibly interested in Chicago history specifically. I was quite surprised to find a dearth of stories depicting the history of pizza in Chicago. For a town with its own very iconic style of thick pizza, one that coexists with an equally unique and abundant style of thin pizza, there just isn’t that much written about how these styles came to be. Our first mission is going to be to fill the gaps in the writing on Chicago pizza history. From there, I think we would be perfectly keen on expanding the study to the evolution of pizza across America and across the world. It really is quite a fascinating chronology to trace!

PMQ: Obviously you are using social media for this as well. Talk about why Facebook and Twitter may be useful for this.

Stephen: Harking back to the community aspect, we want to use social media to attract other enthusiasts and proliferate the obscure stories of pizza past, present, and future. I love the idea that pizza is somewhat of a narrow focus and almost an esoteric study for some, but one, which is so relatable to almost anyone the world over. Social media allows us to interact with both ends of the spectrum of pizza enthusiasts as well as everyone that falls in between.

Erin: For me, the most useful thing about social media, so far, knows that Stephen and I are not alone. It’s just been just the two of us, researching pizza, eating pizza, talking about pizza, scrolling through pizza making message boards, all kinds of things. Twitter and Facebook have confirmed the fact that there is an audience for this. As a writer, Twitter has especially challenged me to fit all I want to say in the space permitted. It’s been a lot of fun.