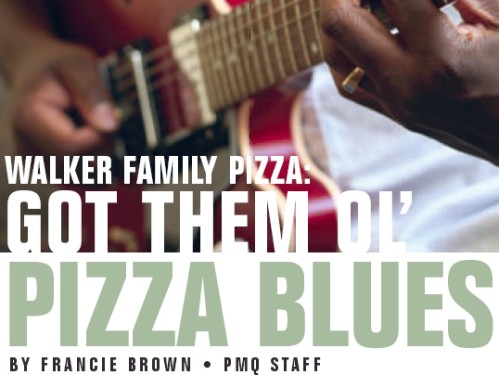 David Walker, owner of Walker's Family Pizzeria in Bella Vista, California, has a laid back, Beach-Boys-California style that ensures his restaurant's success. Walker Family Pizzeria is a blues-oriented pizzeria. "We went with blues because it's a cross-cultural, cross-gender entertainment option," David said. "It's a venue that you can take your kids to listen to blues and odds are, there isn't going to be a physical altercation. There's not going to be too many people who have had too much to drink." David has a regular Blues Night every Friday from 6 to 9 p.m. Every band that performs there must turn in a demo CD that David screens to make sure the band is the right fit for his restaurant. They currently have about 15 different bands that they can pick and choose from on any given Friday night.

For a restaurant that only seats about 90, Blues Night regularly brings in around 110-120 people. David pays every band $250 for three hours. He doesn't charge a cover, preferring to make all of his money off sales of his food and drinks. On Blues Night, David doubles his staff up to four cooks and three front-end people and two to three delivery drivers for his delivery population of about 12,000. Even with extra staff, David, who sings vocals, doesn't get on stage. "A lot of the bands are constantly trying to get me to jump up there with them, but I'm usually just too busy to do it," David said.

To fully understand his marketing concept, you have to know a little bit about David's family. David and his wife Shawna have three children, all of whom serve some small part in the restaurant. "What I do while I'm in the store is primarily PR, PR, PR, PR," David said. "My wife, Shawna, is the goddess of the kitchen. She cooks and does all of our purchasing, bills and bookkeeping." His son, 13-year-old Briston, can be found in the store two to three days a week washing dishes. His oldest daughter, 11-year-old Lexi, is an aspiring waitress, taking orders every chance she gets, while his five-year old daughter, Bryna is around for the cute factor.

His children help him out with some of his marketing. David made up a few pizzas and put them into individual slice boxes and loaded the pizza, some menus and his kids into the car. They went from neighborhood to neighborhood, knocking on doors and giving out slices of pizza and menus. "If I can't get them in with my print and radio ads, then damn it, I'm going to take it to their doors to try it," David said. "People really liked the generosity of having something free and, of course, having my kids deliver it to their door really helped as well."

David takes a slightly different approach to advertising than most other pizzerias. Yes, he does the same Yellow Page ads, the same newspaper, radio and television ads, but unlike most people, radio ads are his chosen form of advertising. "At the beginning, I hit the radio very hard," David said. "I advertised on the six local stations with a really hard regiment – three spots a day per station – just to get my name out to the public." He has no way of measuring how the radio ads work, except for his customer comment card that asks where they heard of the pizzeria. Towards Christmas, he slows down and goes into what he calls a maintenance schedule, only advertising on two stations a couple of times a week. "I think the time of year isn't right to spend that kind of money. People are thinking of Christmas and how much that will cost them," David said. "People aren't eating out as much as they will come January, which is when I'll start spending that advertising money again."

On August 11, 2004, a fire broke out in Jones Valley, only a few miles from David's hometown of Bella Vista. Started by a man mowing dead grass in the heat of the day, it cost the state of California $8.8 million to contain and burned 80 houses, threatened 350, and caused widespread evacuations. The day the fire started, David and his staff took pizzas, sandwiches and drinks out to the firefighters and the evacuees.

Within a week of the fire's start, David masterminded what he called the "Bear Incident Community Dinner." Using a circus tent behind his restaurant, David raised $6,000 for the fire victims. "We put together a lasagna, pizza and spaghetti dinner, complete with various desserts," David said. "You name it, and I had it donated. I charged $15 per head and raffled off $3,000 worth of donated gifts. Florists, masseuses, dinner houses – they just threw gift certificates at us."

Rather than donating the money to an organization to be handed out, David put the money into $100 gift certificates at Home Depot and then gave them to the Jones Valley firefighters to hand out. "My reasoning there was that the firefighters would know who was really effected by the fire and who would benefit the most from the certificate," David said. "I did explain what I was doing to the people at Home Depot, but by that time, they'd already been hit up by others in the area trying to raise funds for the fire victims. That's one reason why I had my dinner so quickly after the fire started. I knew if I waited, every single Tom, Dick and Harry was going to ask for donations."

Then, Now and Soon

In the late 1800s, the restaurant's building was a stage stop and later converted into a lumber mill. "When we bought it, it still had wagon lights and things on the ceiling of the building," David said. "The wood paneling made me think of Deliverance all over again." They cleaned the building up and decorated the walls with surfboards, wakeboards and bamboo awnings. Part of the decor includes an old VW Bug bolted to the wall and the bed of an old pickup truck to hold the big screen TV.

Come May, David and family plan to break ground to build a "beer garden." A beer garden is an outside patio complete with a bar: they're even planning on decorating it with hops and barley. Along with the garden, they'll have an open barbeque pit so they can offer barbeque pizza.