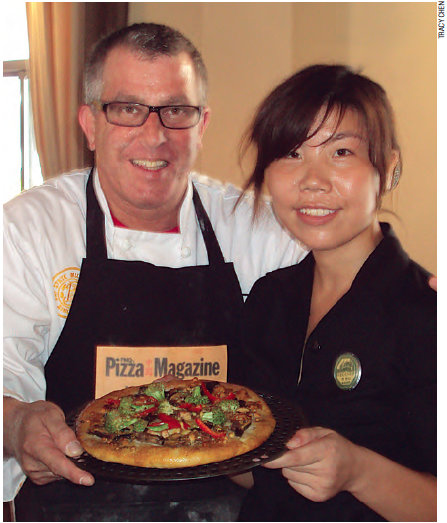 PMQ China recently sent me on a mission to six cities in China and asked me to talk about pizza history, pizza making techniques, pizza styles and the future of the pizza industry in China.

Chain pizza began in China in 1990 when the first Pizza Hut opened, and the market is now dominated by the pizza powerhouse. A few independent pizzerias and chains such as Sbarro (sbarro.com) and Papa John’s (papajohns.com) have also entered the fast-emerging market.

Who is eating pizza in China? The demographics are huge when you consider that more than 1.3 billion people live in China—that’s more than 20% of the entire world’s population. Those under 15 years of age make up 20.3% of the population and are the most devoted pizza eaters. Those 15 to 29 years of age are the next-biggest pizza eaters, and they compose 22.8% of the total population. Combined, these 569,351,000 people are adding pizza to their diets and enjoy the pizzeria dining experience. They enjoy food that is quick to prepare and that is delivered to their door. Also, wealthy Chinese citizens are much younger than their counterparts around the world. Statistics show that 80% of rich Chinese are under 45 years of age, are exposed to Western brands and enjoy international foods.

However, Chinese over age 40 are not as accepting of pizza. I quickly learned this lesson at my first seminar in Beijing. I noticed that the two young children in the group loved my pizza, and the young pizzeria workers and owners aged 19 to 40 enjoyed my pizza; but those 40 years and older thought my pizza was just okay. I was producing classic Italian pies such as Margherita and prosciutto-arugula; New York-style street slices and pepperoni pizza; gourmet-style pies with smoked salmon, dill and Parmesan cheese, or shiitake mushroom and French Brie, or barbecue spicy shrimp; and even Nutella and banana pizzas for dessert. The seminar went well: The students were engaged and interactive, and several of the students made outstanding pizzas. But my pizza was just “okay” for most of the students. Where did I go wrong? The dough, sauce by Heinz, cheese by Bright Dairy, and toppings were top-of-the-line. The Lincoln conveyor ovens performed extremely well, using high temperatures (close to 285°C). I was happy about the information the students learned and the great questions they asked, but I was puzzled. People in the United States, France and Australia all loved my pizza, but in China most thought it fell short. Had I failed somehow? I went back to the hotel to ponder the outcome and to prepare for Qingdao, the next city on my China tour. 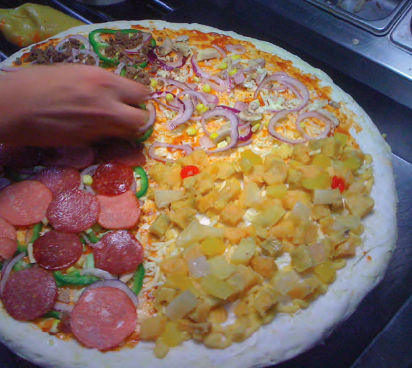 At breakfast the next morning, I saw a sponsor’s sales team member and asked if I could join him for breakfast.He asked how I thought the seminar went. I told him I was happy but felt that the Chinese people did not understand my pizza. He then enlightened me about pizza trends in China. He said, “Steve, pizza is for young people. My son is five years old and is constantly asking, ‘Daddy, daddy, can we go to Pizza Hut?’” He went on to explain there is little to no cheese in the Chinese diet, so many Chinese 40 years and older do not eat pizza. I was beginning to understand why my pizza was not a total crowd-pleaser. He said his son is insistent, and the family will eat pizza sometimes three times in a week; Pizza Hut is his favorite. I immediately located the closest Pizza Hut so I could review the menu and add some Chinese-influenced pizza to my presentations. My next seminars had several new pizzas with light cheese. The barbecue spicy shrimp pizza was made with red onions, smoked gouda cheese and a light amount of mozzarella blend from Bright Dairy. The roasted pork pizza was done with black bean sauce added to pizza sauce and topped with light cheese. The shiitake mushrooms were sliced thinly and served with French Brie and a light mozzarella blend, then drizzled with light soy sauce and sesame oil. I was on a mission to make sure the students in Qingdao loved my pizza. I made a pizza with roasted chicken, shiitake mushrooms and Chinese vegetables, adding very little cheese, and it was a big hit.

This is an amazing time to be in China, only 20 years after the introduction of pizza. Every pizza dynasty in New York has been in business for 75 to 105 years now, so anyone who starts a great pizza shop in China now will likely have their children and grandchildren working there in the future. What an exciting time to be a pizza maker in China! Some of these students will likely become the leaders of the pizza industry and develop a new style of pizza just for the Chinese people. With hundreds of new vegetables, spices and toppings, the Chinese pizza makers will excel with new combinations and tastes. The creativity of the pizza makers, along with the largest pizza market in a single country, will propel the industry rapidly.

My trip continued to Shanghai, Nanjing, Hangzhou and Guangzhou. The pizza was great and became more Chinese with each city. We had one pizza with tomatoes and bananas. The barbecue spicy shrimp got better in each city and grew increasingly popular. Roasted pork was a common topping. Several varieties of mushrooms were used. Cheese was used lightly, only to hold the toppings together. Black bean sauce, soy sauce, sesame oil and Heinz Tomato Chilli Sauce became popular among the new Chinese pizza makers. The comments about the pizza went from “okay” to “yummy” to “excellent” in just a few days. We were unlocking the secrets of the Chinese palate. Chinese pizza was growing, and experimentation was happening before my eyes. The people of China shop for food daily and seek freshness and top quality, so they expect the freshest and most flavorful toppings on pizza. Luckily, I leave the future of pizza in China in good hands: The students are hard-working, passionate and creative. The future of pizza in China looks bright, but for now use light cheese to please.