Giovanni Graziosi bought Vincenzo's Pizzeria last year when he was building his home in the small town of Ste. Julienne, Quebec. 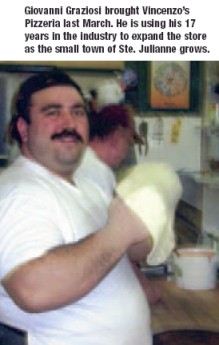 The little two person pizza operation had the potential to pull in bigger business, and Giovanni saw this because the village of 15,000 doubles in the summer months with the opening of summer homes, camps and nearby lakes. The village is also growing with 120 new building permits issued this year. The city expects the number of permits to double in the next year.

Giovanni said knew the place needed work. "Compared to the other restaurants around here it was good, but the guy that owned it before was just getting by," he said. "I bought the restaurant for $150,000, but what I really bought potential of the place. We're one of two pizzerias, and three or four other restaurants. The other restaurants are only open for lunch. By being open from 11 a.m. to 10 p.m., we aren't really competing against them."

By adding to the menu, raising prices and adding drivers, Giovanni has readied his pizzeria for the growth the area is seeing. He says he's about to start expanding the place beginning with the kitchen. He also wants to add some additional seating in the dining area.

Eighty percent of the business Vincenzo's Pizzeria does in the winter months is delivery. This falls to 65 percent in the summer. With delivery being the basis of the profits, Giovanni knew he had to start here. He has gone from the one driver to five drivers. "Even if I didn't use all the drivers at first, I knew I had to get the product out fast so that it arrived hot and fresh," he says.
changing the menu

When he bought the place, the former owner had everything paid for and didn't need to turn a huge profit, so the prices were quite low. Giovanni came in and increased the prices of everything on the menu after evaluating the cost of the food. A large pizza was selling for $13.95. Giovanni raised the price of his large pizza to $17.95. He also took what he calls "ridiculous" specials off the menu.

"The guy was giving away chicken wings, drinks and fries with a large pizza," he says. "When there's only two pizzerias in the town you shouldn't be giving anything away for free."

Giovanni created two menus for his restaurant: a dine-in and a delivery menu. Since his business is mostly delivery, he decided to put four specials on the delivery menu. The first special is for two small pizzas and two orders of fries. His second special is for a medium "all dressed" pizza with an order of fries for $14.95. His third special is for a seven-inch sub sandwich with a drink and order of fries for $7.95. The best selling special is an extra-large pizza "all dressed" with a family fry for $19.95. Giovanni says this special gives customers the fries for free. "The regular price for a extra-large "all dressed" is $19.95," he says. "The fries are a way to say thank you." The food cost is only 95 cents for the family size fry.
getting the word out 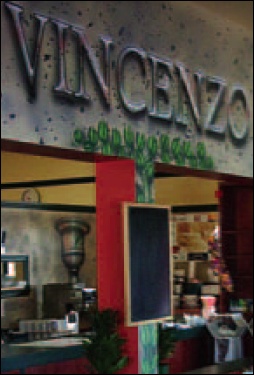 To get the word out about his delivery, Giovanni has sent fliers out three times since he opened last year. His flier lists his delivery menu and specials. He distributes these through a service offered by Canada Post. They will place the fliers in all the mailboxes in his delivery area. The current list has 3,615 houses on it, he says. "My fliers go to those 3,615 houses," he says. "It's an expensive way of getting our name out there, but until I expand my restaurant and get a POS to track customers, I have to concentrate on making sure I reach everyone." Each time he mails it costs him $122 to print the fliers and $388 to mail them.

Right now, Giovanni offers specials each day of the week to get people coming in for lunch. The $8.95 special is usually for pasta such as veal Parmesan. The special includes a cup of soup, dessert and coffee. Dine-in accounts for about 5 percent of Giovanni's business, mostly because his dining area is so small. He says that his lunch business will get better once he expands the dining room. He plans to expand to 60 seats.

Giovanni's menu is wide ranging with about 15 pizzas and 15 subs plus salads, hamburgers, hotdogs and assorted salads and sandwiches. For the pizzas, which account for about 60 percent of his sales, there are set recipes. He says that this is something unique to Quebec. "All the restaurants I've owned and eaten at have done it that way," he says. "The only people who build the pizzas per topping are the American chains like Domino's, Little Caesars and Pizza Hut."

Something else Giovanni says is unique to Quebec is the way they cook their subs. "We saute the pepperoni, the onions and green peppers on the subs," he says. "Then we add the cheese and bread and grill. The subs are served open-faced with lettuce and tomato." Giovanni recently added a new type of sub bread made from pizza dough that customers love.

"With the pizza dough, I make a wider skin and cut it in half," he says. The two pieces of dough are grilled and prepared just the same as his other subs. The interesting thing is he charges more for the pizza dough subs, even though they cost less than the bread he gets from a local baker. "People started buying them because they cost more," he says. "They said it must be better if it cost more." To promote the new subs, he put a line on his menu calling attention to the fact that they were new. He also trained his waitresses to ask if they want pizza dough or sub bread when taking orders. He sells the "pizza dough" subs for one to two dollars more. For the seven-inch, he charges $1 more; for the 10-inch sub he charges $1.50 more and for the 14-inch sub he charges $2 more. 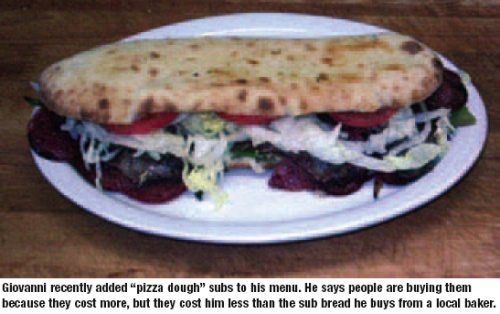 Giovanni is working on a low-fat menu to combat the little competition he does have from Subway. He wants to do this to retain the more health conscious customers of today.

As the town of Ste. Julienne grows, Giovanni is focusing on "being in the right place at the right time." He knows that more restaurants will come as the village grows, but "customers will be used to your taste, your pizza and your service. The marketing point of view comes down to that: give good service and quality products."