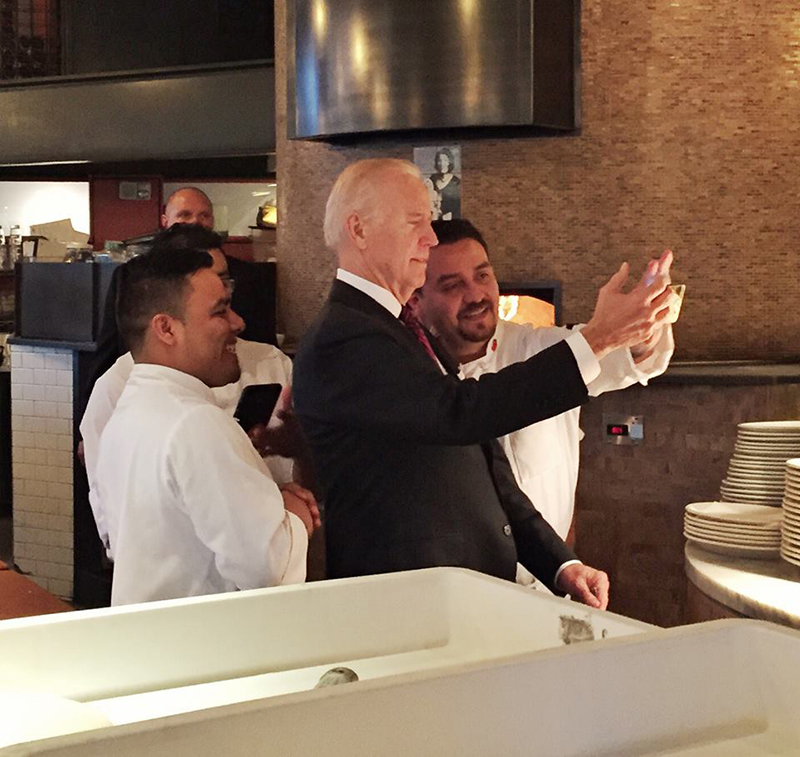 As owner of Tutta Bella Neapolitan Pizzeria, a four-store company in Seattle, Joe Fugere makes pizza for everyone, regardless of political affiliation. But it’s no secret he has a positive relationship with the Obama White House. And that might explain why Vice President Joe Biden dropped in to Tutta Bella’s Westlake Avenue location during a visit to Seattle on Monday and ordered four Neapolitan pies to go.

Biden was in Seattle to tour a research facility to promote a $1 billion proposal to cure cancer, announced in President Obama’s January State of the Union address. It’s a topic very close to the VP’s heart—his own son, Beau, died of brain cancer at 46. As KOMO News reports, Biden toured the Fred Hutchinson Cancer Research Center, which conducts leading-edge research on using the cancer patient’s own immune system to fight cancer cells.

After the tour, Biden dropped in to visit Tutta Bella and placed his order. While he was there, he posed for selfies with employees, tipped the staff and even talked on the phone with Fugere’s mom. Tutta Bella’s Facebook page referred to it as a “short but sweet visit.”

Fugere’s ties to the Obama administration date back to at least 2010 when he participated with the president himself in a roundtable discussion about the issues facing small businesses. At that time he credited Obama’s economic recovery plan with helping him to secure a government-funded SBA 7(A) loan for his business through a community bank.

After the meeting, Fugere wrote a guest blog for whitehouse.gov, titled “The Proof is in the Pizza: A Small Business Owner’s Story,” in which he described the roundtable meeting. “[Obama] asked me several insightful questions, my favorite being, ‘What keeps you up at night?’” he wrote. “I was able to tell him that, on top of the typical issues of meeting payroll (including health care benefits), managing inventory and taking care of customers, small businesses today have the added worry that they might lose their line of credit or be turned down when requesting financing to expand or sustain their business.”