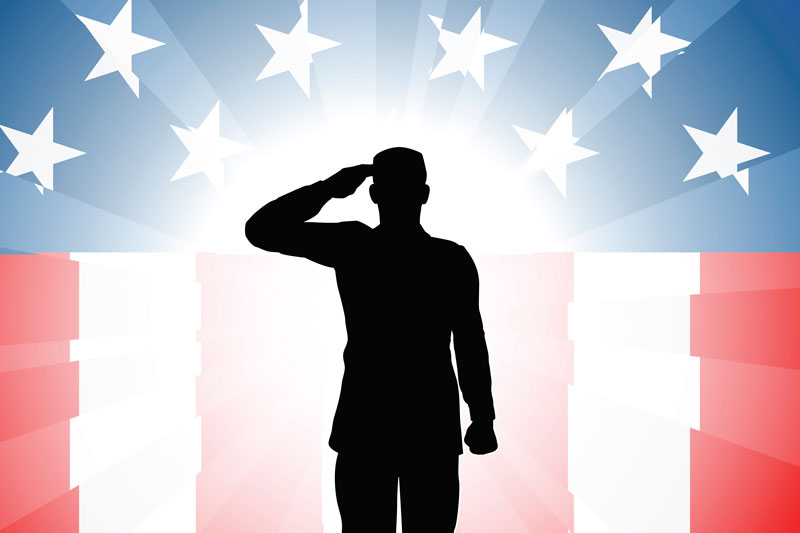 The pizza industry has long supported veterans’ causes, with megachains like Little Caesars and Papa John’s and smaller companies like Big Mama’s & Papa’s Pizzeria offering franchising opportunities tailored for former servicemen and servicewomen. Everyday food discounts for customers with military IDs abound in pizzerias around the country. California Pizza Kitchen last year even served up a Veterans Day menu with pies, salads and pastas. In honor of this year’s Veterans Day, November 11, we talked to several operators and chain executives to explore how the pizza industry serves those who serve us all.

“Our goal for Veteran’s Day 2016 is to have pizza parties at VA hospitals in every state. They served us—now it’s time to serve them.”
—Mark Evans, Pizza4Patriots

Marco’s Pizza has an unclassified message for America’s defenders: If you’re active-duty military, the company wants to work with you. Although the Toledo, Ohio-based, 734-unit pizza powerhouse has a history of supporting veterans, the company has ramped up vet recruitment in recent years. They placed those battle plans into the combat-tested hands of retired Army Lt. Col. Scott Quagliata, who assumed his new post as Marco’s vice president of veteran’s programs and recruiting this summer.

Quagliata, who served as an artillery officer in Iraq before retiring in 2009, leads Marco’s push to transition active-duty troops to Marco’s management pipeline. “Our veterans make great franchisees because they understand and adhere to operational standards,” says Quagliata, who was introduced to Marco’s management program through a former Army colleague and current Marco’s franchisee. “There is a direct correlation between success in the military and success in business.”

Rated by Entrepreneur magazine as a Top Franchise for Veterans, Marco’s offers vets a $5,000 discount on its initial franchise licensing fee. Its new military employment recruitment efforts roll out this fall in the Southeast, initially focusing on Army posts in Columbia, South Carolina (Fort Jackson); Savannah, Georgia (Fort Stewart); and Columbus, Georgia (Fort Benning). The objective is to recruit and screen military veterans, who will rise through the ranks and become Marco’s franchisees.

Quagliata is partnering with existing Army- and Marine-operated transition programs, but he’s looking to build relationships with all of the military services nationwide. “We hope to have our Southeastern Army initiative approved and in place by Veteran’s Day,” he says. “We’ll work with these installations to identify active-duty soldiers with the career skills that are a good fit. We’ll enter them into a 12-week training program at one of our nearby stores and, after training, they’ll move to a location where Marco’s has a franchise need. Within a couple of months of separating from the military, they will have a job as a general manager. Ultimately, we hope to expand this effort into a robust and massive military transition partnership.” Quagliata expects agreements with 10 military installations by the end of 2017.

With the removal of U.S. combat forces from Iraq and Afghanistan, the nonprofit military support outfit Pizza4Patriots has shifted its pizza delivery target from overseas battlefields to VA hospitals and first responders. Founded by retired U.S. Air Force Master Sgt. Mark Evans and his son Kent, the organization first made news in 2008 when it organized the July 4 delivery of 2,000 Chicago deep-dish pies from the Windy City to the smoldering Iraqi desert and fed 1,300 pizza-starved combat troops. With the help of pizzerias like Uno’s, Lou Malnati’s and Gino’s East and shipping company DHL, 2,000 fresh pies were airlifted on dry ice to Camp Victory, the former palace of deposed dictator Sadam Hussein. Since then, Pizza4Patriots, working with longtime pizzeria partner Rich’s Pizza, has boosted those numbers to 165,000 pizzas feeding 675,000 deployed troops.

This year’s priority: serve stateside troops battling declining health and loneliness. “Our goal for Veteran’s Day 2016 is to have pizza parties at VA hospitals in every state,” Mark Evans says. “They served us—now it’s time to serve them.” There are 132 VA medical centers and 1,400 VA facilities around the country, and the average facility needs only 20 pizzas to serve its patients, he adds. At an average $5 per pizza, that’s only $100 to host a pizza party for an entire facility of deserving veterans. (Find out how to contribute at sgtpizza.org.)

Another new Pizza4Patriots focus is its First Responders Initiative. In early September, the nonprofit funded and staged a pizza party for hundreds of disaster relief volunteers supporting the people of Baton Rouge, Louisiana, after floodwaters ravaged the area. Future plans, adds Evans, include spreading pizza love to firefighters, police and other emergency responders.

When it comes to providing military support on a daily basis, stepping up is part of the business plan for Firo Fire Kissed Pizza in the bustling Army town of Lawton, Oklahoma. Serving the community that hosts Fort Sill, the largest artillery training base in the world, Firo’s, which opened in October 2014, features Tuscan-style pizza. And owner Matt Jones has made soldier solidarity a mission imperative for Firo’s.

“We’re highly involved in the Lawton community,” says Al Ryan, Firo’s chief of operations. “Fort Sill is a big base, with 53,000 military, civilian and family members. Every week, they have a graduation ceremony, which attracts visitors from all over the country. When visiting families come in, they enjoy our high-quality ingredients and homemade dough and bring that experience home with them. That gives us a leg up as we implement our long-range plan to expand to new locations, likely in more military communities.”

“[Catering to visiting military families] gives us a leg up as we implement our long-range plan to expand to new locations, likely in more military communities.”
—Al Ryan, Firo Fire Kissed Pizza

Firo’s dedicates a portion of its sales every third Monday to Operation Home Front, a nonprofit that distributes funds and support to military families with emerging needs, including food, housing, utility bills and child care. “Our goal is to give back to military families,” Ryan says, adding that some military families eat at Firo’s three or four times weekly. “Every day, we discount our pizzas 5% for active duty and retired military members. Plus, we challenge our staff to volunteer for community events like Lawton’s annual Armed Forces Parade. Our management also meets once a month with the Lawton Chamber of Commerce to help bridge job development and economic partnership with business and the military.”

From the battlefield to VA hospitals, this Veteran’s Day reminds us all that our GIs deserve a slice of appreciation from a grateful nation.