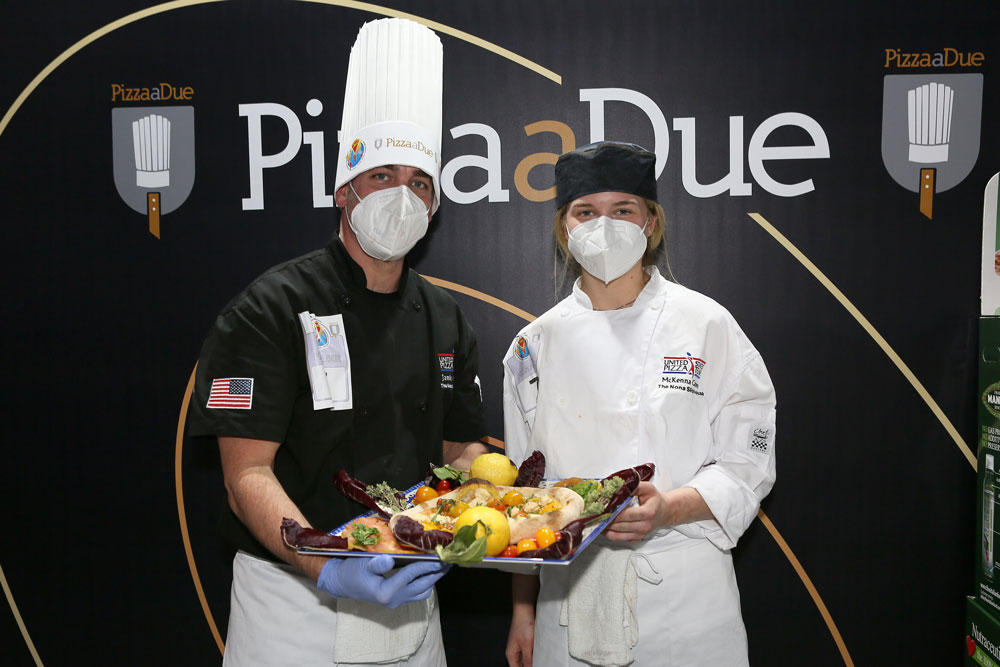 Jamie Culliton and McKenna Carney show off their plant-based pie, crafted for the Pizza a Due competition.

Backstage at the World Pizza Championship (WPC)—or the Campionato Mondiale della Pizza, as it’s known in Parma, Italy—is usually an electric blend of raw nerves, a madcap mix of frenetic activity and painstaking, over-the-top artistry. But at the 2022 edition, which took place April 5 to 7, an added element permeated the air: the feeling of a reunion. After the pandemic put the WPC on hold in 2020 and ’21, the event hosted plenty of long-awaited hugs, the crinkling of eyes a telltale sign of wide smiles concealed by still-masked faces.

These 12 competed in a range of categories against more than 700 pizza competitors total, in categories both culinary (Pizza Classica, Pizza in Teglia, Pizza in Pala, Gluten-Free, Pizza a Due and Pizza Napoletana STG) and action-packed: Largest Dough Stretch, Fastest Pie Maker and Freestyle Acrobatics.

The USPT is used to being at somewhat of a disadvantage—unlike many Italy-based competitors, overseas entrants need to work on the fly, scouring local markets and artisan purveyors for potential toppings that will help their pies stand out among hundreds of entries, only days or hours before “go time.” This year offered up added challenges, with shoebox-size shops limiting the number of customers allowed inside due to lingering COVID concerns, requiring members to cycle in and out of local salumerias and home-goods stores, on the hunt for everything from thin-sliced prosciutto to decorative plates on which to present their pizzas to judges. (This is Italy, after all, home of high fashion, where keeping up fabulous appearances is perhaps half the battle.)

The USPT takes it all in stride, no doubt partially due to the fact they are—echoing the COVID-era solidarity cry—truly in this together. From early-morning breakfasts until the wee hours, the team swaps an endless stream of strategies, encouragement and war stories from past years’ events.

One veteran of the WPC is LaMarca, who is so in the zone in the hours leading up to the event that he already has his ingredients pre-portioned in individual containers and passes on an impromptu interview—not out of aloofness (few are more gregarious and good-natured than LaMarca) but pure game-face preparation. “I’m just visualizing the pizza right now,” he explains. “The judges can tell if you know what you’re doing. I come with every ingredient in a bowl so I don’t get distracted.”

Others offer up their pre-competition thoughts to PMQ’s Blake Harris, who videos the team round the clock alongside USPT coordinator Brian Hernandez, who posts frequent social media updates. They work amid hundreds of dedicated pizzaioli, who are not only brave enough to challenge themselves against some of the best in the world but who are passionate enough to consider their creations not just food but evocative of far loftier ideals: art, science, love. 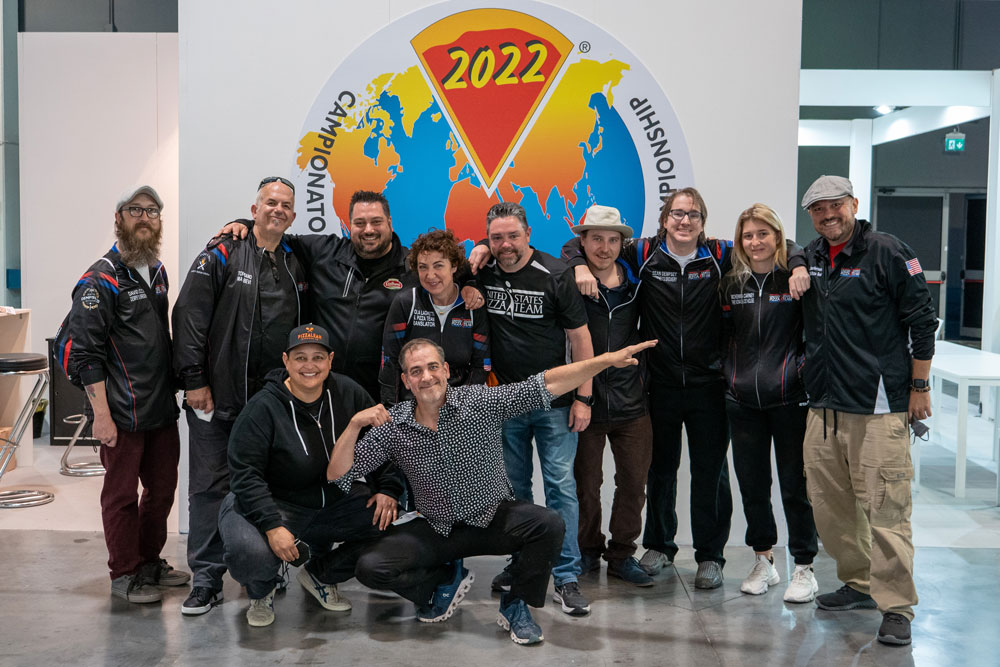 Being halfway around the world at a pizza competition does not prevent pizzeria problems from popping up back home. Distracting long-distance phone calls ring in to USPT members: One loses a delivery driver. Another’s walk-in cooler breaks down on a busy Sunday. Yet another’s kegerator conks out.

The team perseveres, meanwhile harboring a variety of approaches and philosophies regarding the WPC itself. “I think I’m going to do amazing today,” predicts Trupiano, who is in Parma for the first time but has competed around the world. “I want to bring home that gold!”

Others are simply relishing the journey. Lars Smith, who would ultimately nab fifth place in the world for his Pizza in Pala entry, the Zucchine e Burrata, and receive top American competitor honors at the WPC awards ceremony on April 7, waited years for his arrival here after landing a free trip via the 2019 Galbani Cup. “It’s surreal that we’re all here three years later,” he reflects before the event. “My expectations are to have fun. I want to execute the pizzas I’ve planned well.”

One special guest with the USPT wasn’t competing at all. Nicholas Harper, owner of Peace of Pie On Hartwell in Fair Play, South Carolina, won a contest held by USPT sponsor Margherita Meats. When Harper was first contacted about the win, he ignored it, sure that it was a nefarious online scam to solicit his personal information. By April, he was beaming through his first trip to Italy, soaking up business tips from the entire team.

“Who doesn’t want to go to Parma, Italy?” Solum says. “The city is gorgeous. It’s a little scary [to compete], but it’s been a whirlwind trip so far. You hardly have time to think!”

Solum’s friend and business cohort, Dempsey, was kind enough to lend Culliton, a 15-plus-year acrobatic competitor, some dough to compete after his own batch went south. It’s a common sight among the team members, even though they’re technically competing against each other: Microplanes, ladles, trays and spoons freely change hands. The veteran Culliton, who placed fifth in the Freestyle Acrobatics competition, kept a cool head throughout. When a pastry bag literally fell apart in his hands during the Pizza a Due competition—performed with the 18-year-old Carney working the oven—he muttered, “Well, didn’t expect that.” But Culliton registered barely an eye blink as he worked to scoop out the bag’s cashew-based ricotta. (Carney, a vegan, inspired the unique plant-based pie.)

Despite challenges, the team performed well. In addition to Smith’s honors, LaMarca achieved the highest score from the U.S. for his Detroit-style Pizza in Teglia, called The Detroit, Parma Style!, and Aceves Smith took home the highest score among competitors from Mexico for her Pizza Classica entry, the Tonno e Cipolla. Sommers received the highest scores for the U.S. in both Fastest and Largest Dough Stretches.

Still, when watching the USPT in action, you get the feeling that members come for the competition, but they keep coming back for the experience. The springtime surrounds of Parma, with its intricate architecture and local culinary delicacies, would be enough to entice, or the eye-popping artistry on display at the WPC, or the opportunity for exchanging fresh inspiration for back home. But it’s really all about the camaraderie that the USPT fosters. You come away with the conviction that when one member performs well—and even when they don’t—everyone in the team truly feels like a winner.