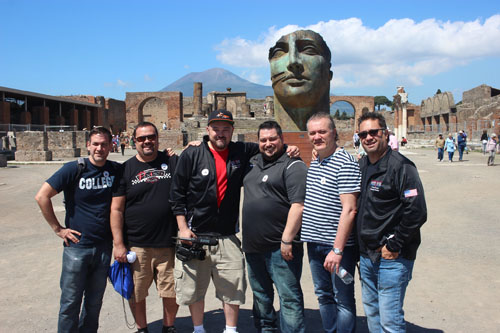 Several members of the Groupon U.S. Pizza Team are in Naples, Italy, on a special pizza cultural exchange mission fresh off their great showing at the World Pizza Championship earlier this week in Parma. While in the area, brothers Gino and Leonardo Rago led the group, which included PMQ's Brian Hernandez, Michael LaMarca, Bruno Brunetti, and newsly named Freestyle Acrobatic Champion Jamie Culliton, on a guided tour of the well-preserved ruins of Pompeii.

In its heyday as a key Roman Empire city, Pompeii was a heavily-populated trade center, which became a nexus for cross-cultural  exchange of goods and cuisine.  At the time of its destruction after the eruption of nearby Mount Vesuvius, Pompeii had over 200 restaurants and 40 bakeries. “I've been watching the show Spartacus about the gladiators, and now I'm visualizing all the stuff from TV here in Pompeii, and it all makes more sense now,” an impressed Leonardo Rago, co-owner of Panino's in Chicago, stated. 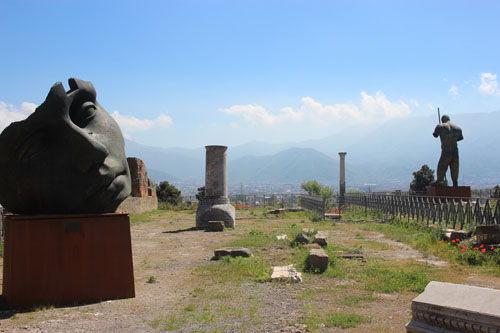 Through a tour guide, the pizza chefs learned about some of the cuisine from 2,000 years ago, including prime cuts of giraffe meat imported from Africa, a delicacy made from a recipe of mouse and honey, and an all-purpose sauce called “garum.” The garum sauce was made from fermented fish innards and used on practically everything. Would any of the Pizza Team cooks be willing to cook up a mouse and honey pizza? “I don't think so,” answered Leonardo Rago.

The guide then took the pizzaiolos to view the ruins of a bakery which contained several grinding mills and a wood-fired oven dating back to 79 A.D.  Particularly impressed was pizza master Michael LaMarca, owner of Master Pizza in Cleveland and captain of the Groupon U.S. Pizza Team. “There is NOTHING wrong with that design. What could go wrong with it? Nothing. That's why it hasn't changed in 2000 years. It's perfect.”

“This is really beautiful. What a great day. It was perfect,” summed up the worlds top pizza dough spinner, Jamie Culliton.