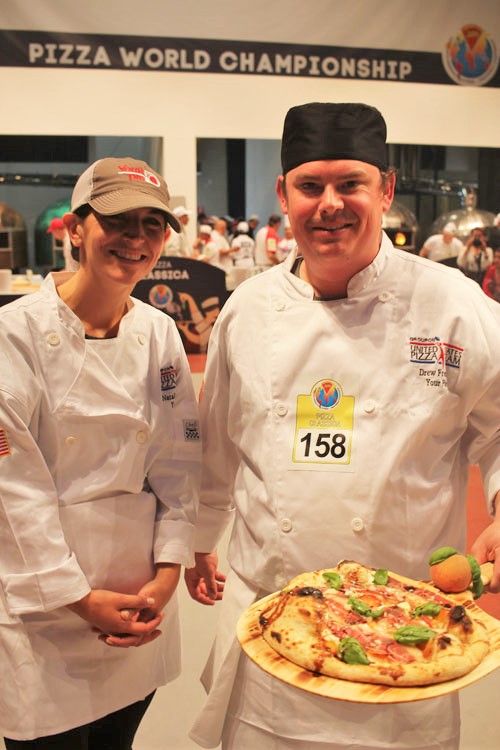 For the Groupon USPT newcomers, nerves were not an issue. “I'm actually too tired to be nervous,” said Michael Reyes-Casanova of Five Points Pizza in Nashville. Your Pie's Natalie French added, “I don't think Drew (French, her husband ) gets nervous about anything.” The Your Pie founder entered his first international competition with a pizza entry topped with peaches and prosciutto di Parma. The sweet and salty combination was not only flavorful, but honored the region which hosts the contest. “It went well. I was pleased with the outcome. All in all, I'm happy,” French said.

Romeo Pizza's Mike Russo of Brunswick, Ohio, concocted a pizza with roasted eggplant, tomatoes, mozzarella di bufala and an oil and garlic base. “The dough looked great. I thought it came out really good, but now it's up to the judges," Russo said. "It was really cool to be here for the first time. The camaraderie everybody has is really nice.” 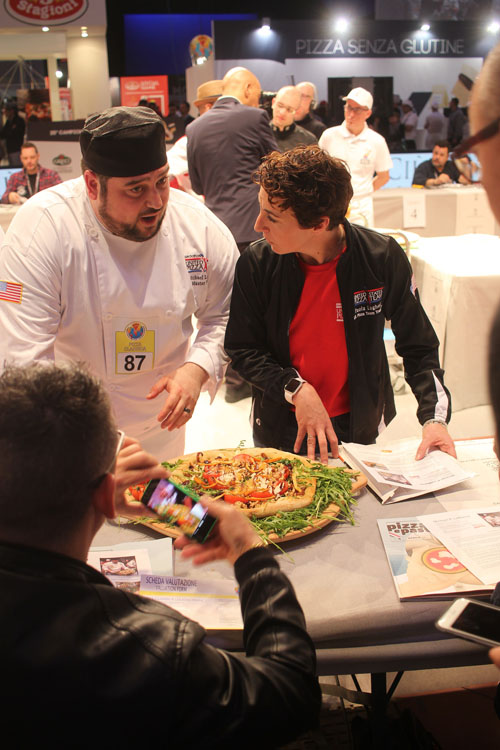 PMQ Pizza Magazine's own Brian Hernandez competed for the first time in the World Championship. Although he admitted to being a little intimidated going into his first Classic category, the PizzaTV test chef was steady as a rock while preparing a "Picante-rita" with an olive oil base, fresh shredded mozzarella, onions marinated with balsamic glaze, crushed tomatoes, thinly sliced salame picante, Parmesan and basil. "The judges seemed to enjoy it, and I didn't make a total ass of myself," he said.

Another USPT rookie, Scott Volpe of Fiamme Pizzeria Napoletana in Tucson, Arizona, punched his free ticket to the World Pizza Championship earlier this year by winning at January's NAPICS qualifier. His ever-improving acrobatic prowess didn't disappoint as he wowed the judges with his freestyle score of 420. “It's a dream come true, and you got to go out there and represent,” Volpe said. His score bested the defending world champion, Japan's Takumi Tachikawa, by five points in the preliminary round.

USPT veteran Jamie Culliton earned the top score of Day One in freestyle acrobatics with 453 points. The top six scores over two days will move on to the finals on Wednesday, April 13.

The Groupon U.S. Pizza team looks to explore more of Italy on excursions tomorrow, before taking the stage again on April 13 for more competitive action.