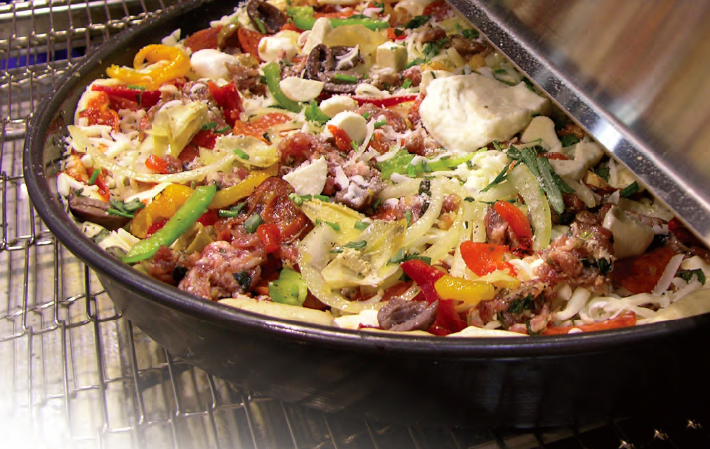 There seems to be some confusion over the differences between conveyor and convection ovens—in fact, some people use these terms interchangeably. However, these two oven types are really quite different.

A conveyor oven can be any oven that has a conveyor, upon which the product is baked while passing through the oven. Conveyor ovens can bake with different heating principals, such as infrared; air impingement; a combination of both infrared and air impingement; or even a combination of conduction with radiant (infrared), air impingement or convection. Each of these is a type of conveyor oven but, as you can imagine, there are significant differences between them and the way they bake. Infrared baking is very gentle in that there is no forced airflow; the bake is very controlled. Think of an infrared oven as a giant toaster, but instead of a control knob indicating lighter or darker (as you’d see on your toaster), the oven has a thermostat that allows you to adjust the emitter temperature to give your product the best possible bake. Since there is no forced airflow with infrared ovens, they do not tend to dry out products during baking. For lightly topped or cheese-topped pizzas, infrared ovens are just fine, and they work great on a multitude of different food items, too.

Conveyor ovens that combine infrared and air impingement use both technologies to give an enhanced bake. By adding the air impingement feature, any issues of eliminating excess water from the top of the pizzas is addressed, and baking times are improved to some degree.

Last, the air impingement oven is the type of conveyor oven that has been a mainstay in the pizzeria industry now for more than 25 years and, in my opinion, is the oven that is most commonly referred to when conveyor ovens are referenced with regard to baking pizzas. Air impingement ovens have been in a constant state of evolution ever since the first one was introduced. Today’s ovens are much improved, in both baking and operational efficiency, from the ovens that we had a mere 10 years ago. The feature that makes air impingement ovens such efficient performers is the way the airflow in the oven is highly focused and directed right onto the product at a very high velocity. As the air impinges upon the product, it causes a distortion in the surface of any water present on the surface of the pizza, increasing its surface area, which, in turn, increases its rate of evaporation, resulting in an overall drier finished pizza. To control the high-velocity airflow, air impingement ovens rely on “fingers,” which can be opened, closed or partially blocked off to enhance or restrict airflow. By adjusting the airflow characteristics, just about any finished baking characteristic can be achieved, on either the top or bottom of the pizza.

Convection ovens, on the other hand, have a much gentler, circular type of airflow pattern in the oven, which is designed specifically to equalize the temperature in the oven as well as aid in heat transfer to the product being baked. These are the basic differences between air impingement baking and convection baking; but, in addition, due to their application in the food industry, there are some other differences in convection ovens of which we need to be aware.

Some convection ovens are designed with open wire-grid shelves, allowing the air to flow freely through the oven. This is great for reheating foods and baking items such as biscuits, but pizza needs to have a crispy crust characteristic; and an open wire-grid shelf in a convection oven does not allow for that. The use of pizza pans is a great way to compensate for this.

Other types of convection ovens utilize a rack that is pushed into the oven. In addition to the convection (air movement), the rack rotates to provide even more airflow over the product and equalize the baking characteristics of the oven so as to achieve a uniform bake throughout the oven. There are some convection pizza ovens that I’ve come across that are something of a hybrid, like the infrared/air impingement ovens mentioned earlier. These ovens are essentially a deck oven with a fan to circulate air over the top of the pizza. This is a combination that can provide a pizza with a crispy bottom, while the circulating air helps in baking the top of the pizza and removing any water released from vegetable toppings.

As you can see, there are many differences in conveyor and convection ovens, and the book is still a long way from being finished. With rising energy costs leading to greater emphasis on energy-efficient ovens, multiple baking technologies will continue to be incorporated into our conveyor ovens. How long will it be before we see a conveyor oven utilizing magnetic resonance (think cool-cooktop home ranges) to rapidly heat the interior of the dough, followed by a dose of intense radiant heat to bring the outer portion of the pizza up to near browning temperature, and then applying air impingement to finish the baking as well as removing any water that might have been released from vegetable toppings? I think it’s just a matter of time.

Tom Lehmann is the director of bakery assistance for the American Institute of Baking (AIB).