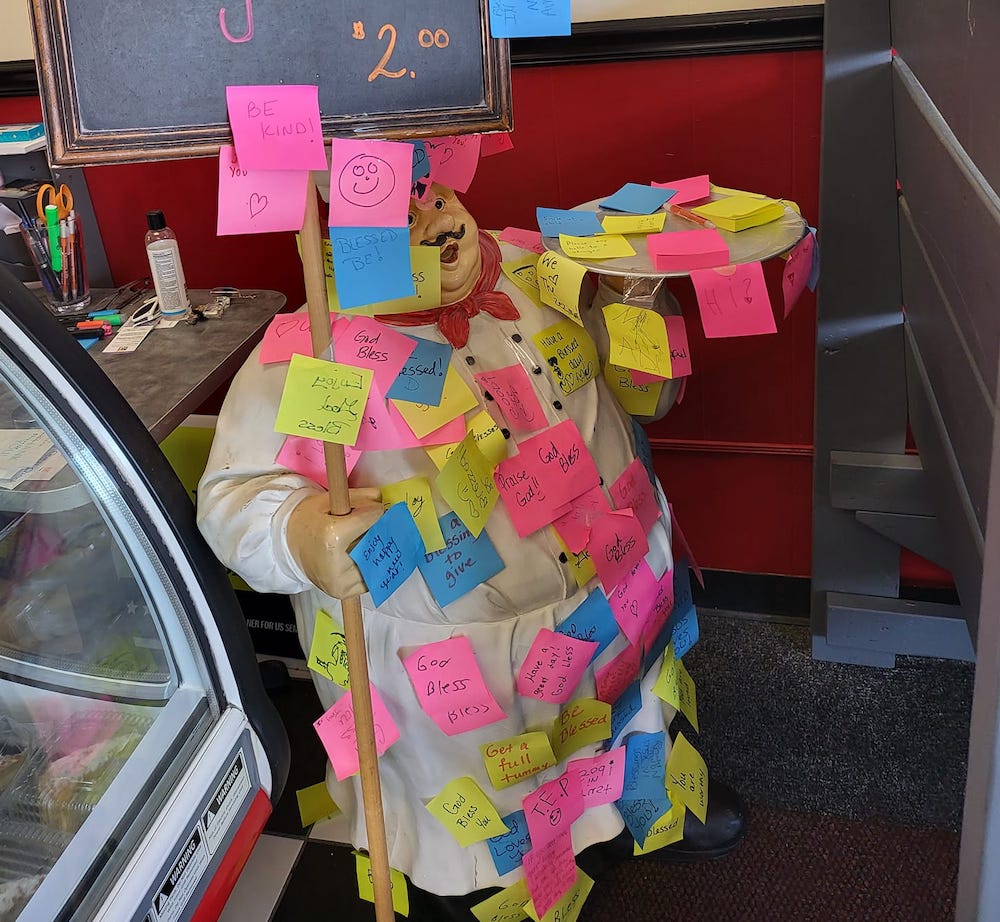 When Mason Wartman, owner of the now-defunct Rosa’s Fresh Pizza in Philadelphia, started inviting his customers to pay a little extra to feed less fortunate customers, he earned a spot on “The Ellen Degeneres Show”—plus a check for $10,000 from Shutterfly. That was back in 2015, but Wartman’s pay-it-forward idea keeps resurfacing, most recently at Uncle Vinny’s New York Style Pizzeria in Broken Arrow, Oklahoma.

In the Rosa’s promotion, donors scribbled a dollar amount and some encouraging words on sticky notes, which were then placed on the pizzeria’s wall. Anyone in need could grab a sticky note and redeem it for a free $1 slice. Thanks to inflation, slices today usually sell for twice that much, but big-hearted customers are willing to pay it at Uncle Vinny’s.

As KRMG reports, Uncle Vinny’s customers post the sticky notes on a statue of a pudgy Italian pizza man. Each note is good for a $2 pizza slice when turned in by anyone who can’t afford to pay. The notes contain brief messages like “Get a full tummy,” “Be kind” and “God bless you.”

“I just started noticing more and more of a homeless population in our town,” Kim Zezima, Uncle Vinny’s co-owner, told KRMG. “I just see a fellow person who might need something, and this is a basic need. It’s food, you know. It’s not diamonds. It’s food.”

Thanks to the pay-it-forward model and the kindness of strangers, Uncle Vinny’s has given more than 50 slices to people facing food insecurity so far.

“The community is what supports us,” said Zezima’s son and business partner, Lawrence, “so I think it’s really important to give back any chance we get.”