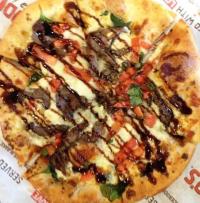 One of the hottest outfits leading the fast-casual gourmet pizza craze is putting down roots in food-focused Colorado. Uncle Maddio's Pizza opened a restaurant in Aurora, Colorado and has plans to open five more in the Denver area.

The Denverpost.com says the Atlanta-based company's founder and CEO Matt Andrew flew to Denver last week to celebrate the grand opening, staying at The Crawford Hotel at Union Station, and schmoozing at Uncle Maddio's with customers. He decided to open in Colorado, he said, because the two main hubs of the fast-casual industry are Denver and Atlanta, not Chicago and New York.

Andrew, a co-founder of Moe's Southwest Grill, started Uncle Maddio's in Atlanta in 2008. There are now 29 locations in 13 states.

At the grand opening, customers lined up to taste test a variety of different pizzas, including the most popular signature pizza: the Steak & Blue with grilled steak, mozzarella and blue cheese crumbles.