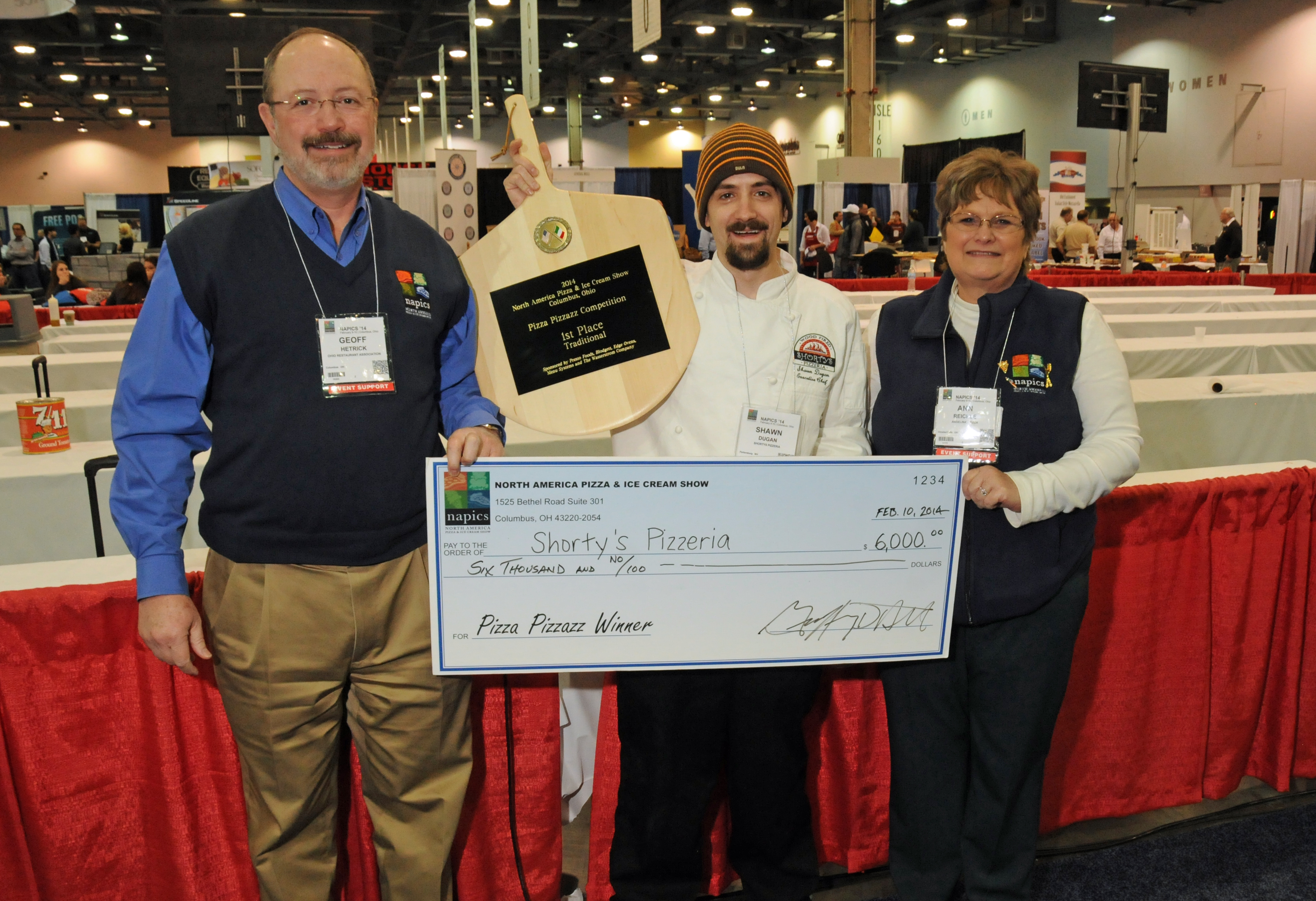 Shawn Dugan, executive chef at Shorty’s Pizzeria in Parkersburg, W.Va., claimed the $6,000 first prize in the Traditional category of the 2014 Pizza Pizzazz competition on Feb. 10. His pizza’s claim to the “Best of the Midwest” title marked Dugan’s first win in only his second try at the 16th annual contest. Pizza Pizzazz is held in conjunction with the annual North America Pizza & Ice Cream Show (NAPICS), Feb. 9-10 at the Columbus Convention Center.

Dugan got hooked on authentic pizza during an internship in Italy five years ago. “The pizza in Italy ruined me on what we had back here,” said Dugan, who operates Shorty’s with his father, Brien Dugan, who is a hotel and restaurant veteran. “When I got back to America (in 2010) and knew we had nothing here like they did there, I started talking to my father about opening up our own restaurant.”

The U.S. Pizza Team heard of Shawn’s talents and recruited him at Pizza Pizzazz before the results were even read. The icing on the cake is that he walked away with first place. The U.S. Pizza Team is always on the lookout for the best pizza making talent in the country. With members all across the country, the USPT is well represented at many local regional events, with a several chances for members to win an all expense paid trip to Italy to compete in the World Pizza Championships in Parma every year in the Spring.

“We keep our eye out for up and coming pizza makers as well as seasoned veterans.” says Brian Hernandez, director of the USPT. “If you have skill in the kitchen, we are interested. Our team is built on a foundation of sportsmanship and respect for our fellow competitors. This brings more of a family feel to the team. Of course you are looking to beat the USPT member next to you, but you are always willing to help them do their best as well if needed. We can all count on each other and that’s what being a team is about. Shawn has displayed many of these qualities as well as an expertise in the kitchen, and with his experience in Italy, I feel he is an invaluable asset for the U.S. Pizza Team and for the image of American pizza in general.”

Shawn and Shorty’s Pizzeria will be representing the United States in a world competition, against hundreds of countries and even more competitors. The World Pizza Championship will be held April 7-9 in Parma, Italy. You will be able to watch live streams of the event at pmq.com/live or at uspizzateam.com