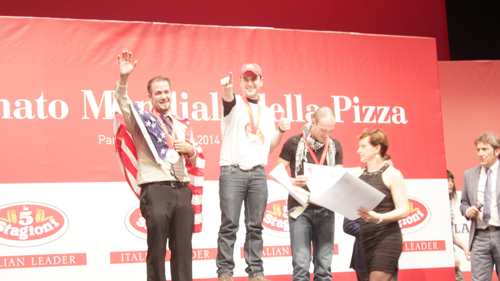 As the U.S Pizza Team flies to Parma, Italy, this weekend to compete in the The World Pizza Championships, they’ve fine-tuned their pizza-making skills to meet the grueling standards of demanding European judges.  “We’ve modeled specific events in our own pizza competitions in the U.S. after World Championships Italian judging requirements to improve our chances in Parma,” explains Brian Hernandez, PMQ test chef and U.S. Pizza Team director. PMQ Pizza Magazine created the U.S. Pizza team in 2000.

Hernandez, who is leading the 17-member U.S. team to the Food Valley of Italy for the fourth consecutive year, says this year’s pizza-making and spinning squad is experienced, hungry and determined to take home the gold. U.S. success will require peak performances against 600 competitors from 20 nations in 10 events.

Here’s a rundown of the competition categories and the U.S. pizzaiolo hoping to make magic in Parma.

The Classica event is a pizza-making competition where taste, appearance, creativity and product knowledge determine victory. Michael Stevens of Palo Mesa Pizza in Arroyo Grande, California, gave it his all last year. That’s even though he had never cooked with the finely ground “00” flour preferred by Italian pizza makers or with an oven hotter than 650 degrees. This year he’s adapted those skills into his repertoire and he and his 12 fellow Classica American participants feel their chances are on the rise.

There’s nothing slippery about Pizza on the Peel–it’s simply cooking a pizza perfectly on the long rectangular peel or paddle that’s standard kitchen equipment for any pizza chef. The husband-and-wife pairing of Jane and Rick Mines who run Nima’s Pizza & More in Gassville, Arkansas, will be representing the U.S. team, but competing against each other in this exacting contest.

In Pizza-for-Two, togetherness reins. It's where Rick and Jane will team up to create a pizza masterpiece. In this event, pizza-makers work together as chef and cook building the final product from dough to toppings. According to Hernandez, the pizza tag teams prepare for this competition by walking local markets to purchase the freshest produce, protein and sauces. During a recent Pizza-for-Two cook-off, Leonardo Giordano of Mona Lisa Pizza in Staten Island, New York, created a salmon, caviar entry that was eyed and sampled by the Prince of Italy.

Gluten-free, or Pizza Senza Glutine, in Italian, is another Pizza Championship event and a segment of the overall industry that’s not going away. It’s also the specialty of Heather Zook of Sinfully Gluten Free in Dayton, Ohio. Zook, who has Celiac Disease, is competing for the second time in Parma. Zook and her husband opened their innovative restaurant to meet the growing demand for gluten-free nutritional food options, including sinfully delicious pizza.

No Americans are competing in this year’s Neapolitan category, but Heinze Beck, a non-baking culinary challenge event is where team newcomer John Coletta of Quartino in Chicago plans to make news. Coletta will prepare a Risotto dish featuring a Quail egg, asparagus and prosciutto that team director Hernandez describes as “a dish to fall in love with.”

The Largest Dough Stretch event is pretty much exactly what it sounds like and Fastest Pie Maker, with Hoosier Dave Sommers of Mad Mushroom in West Lafayette, Indiana, stretching for the U.S., tests competitors’ speed on transforming five dough balls into 10-inch pizza bases.

In addition to rookie U.S. Team members Anderson, Shaw and Coletta, Chris Mallon from Five Points Pizza in Nashville makes his debut on the 2015 team. Two other newcomers are Samantha Jones and Abby Robbins of Mellow Mushroom in Chattanooga. Leah Scurto and Tim Silva of Pizza My Heart in Los Gatos, California, are partners in the restaurant and a Pizza-for-Two double play duo competing in two events for the second straight year.

“Although they’re technically competing against each other, our team is a true family and everyone looks out for one another,” says Hernandez. “When Rick and Jane Mines lost their luggage and their key competition ingredients last year, everyone pitched in and shared whatever materials they had to get the Mines up and running.” Hernandez adds that fantastic customer service from the U.S. Team host Hotel Palace Maria Luigia in Parma only enhances the atmosphere of cooperation and fellowship.  “When I think about the team spirit and lifelong friendships that are created in Parma, I get choked up myself,” he says.