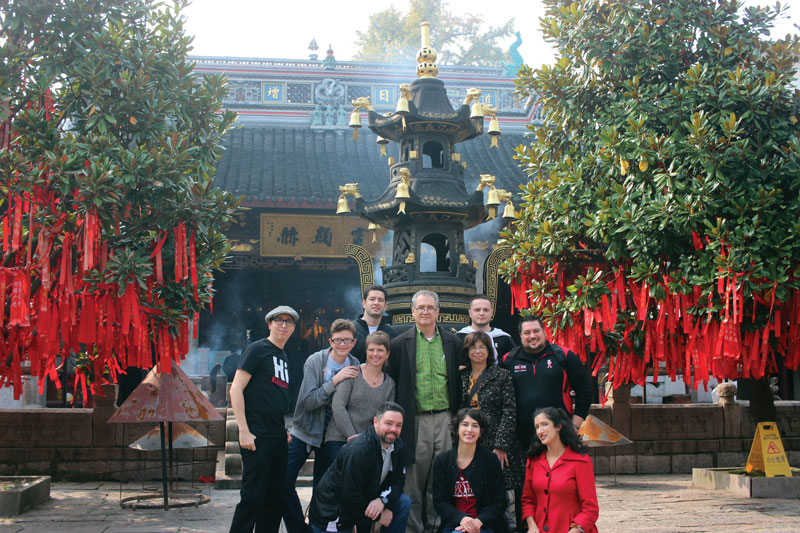 The U.S. Pizza Team’s captain and its longest-tenured member are thrilled to be heading to China, where they expect no less than gold in the annual Chinese Pizza Championship. The pizza-making competition will take place at FHC China, the country’s largest food and beverage show, November 9 to 11 in Shanghai.

Several USPT members, including team captain Michael LaMarca, veteran Jason Samosky, who has competed on the squad since 2005, and Dave Sommers of Mad Mushroom in Indiana, will attempt to improve on the team’s 2015 showing in China, at which members earned second- and third-place finishes. “I know from talking to my fellow competitors that the judges in China evaluate pizza entries totally differently from how they do it in Italy,” says Samosky, owner of Samosky’s Homestyle Pizzeria in Valley City, Ohio.

Samosky will be visiting the world’s most populated nation for the first time this fall. He has earned his international pizza peel, however, having competed five times in the World Pizza Championship in Parma, Italy. “Since we’re not allowed to bring ingredients over on the plane, we’ll make a facsimile of our competition pizza from whatever products we can find when we get to Shanghai,” he adds. “Folks have had flour confiscated in the past. So we’ll have no idea exactly what we’re going to make until we land and have the chance to do some shopping in the local markets.”

What Samosky does know about FHC China comes courtesy of American teammates like LaMarca, who made the journey last year. “I’m told the Chinese do like American-style food so, unlike in Italy, I’ll play off my familiar, American go-to toppings a little closer,” Samosky notes.

Ready For a Breakthrough

LaMarca wants one thing from this year’s Shanghai showdown—victory. The second-generation pizzaiolo captured third place last year. “Our top priority this year is taking gold,” says the owner of several Master Pizza restaurants in the Cleveland area. “We’ve been getting closer and closer in culinary competition in Italy and China, and this is the year we expect to make a breakthrough.”

LaMarca believes a China win would solidify the steady progress that the U.S. team has achieved in recent international competitions—especially in Italy, where he and his teammates have gone to school on traditional Italian pizza practices. “Our team has earned the respect of a lot of judges internationally,” he says. “It has been a gradual meeting of the minds as the judges—particularly the Italian pizza purists—have become more accustomed to our American styles, while we’ve worked hard to adjust to their classic expectations.” As an example, LaMarca cites his own Popeye pizza, originally created back home at Master Pizza. The Popeye features spinach, artichoke hearts and tomato slices. “I converted this version, which was popular in my stores, to Italian specifications by reducing my ingredients a bit and baking a lighter, more authentically Italian crust.”

Like Samosky, LaMarca says he’ll play his cards close to his vest in China because of the restrictive shipping rules. Last year he was surprised—and delighted—to taste some of the toppings preferred by Chinese pizza lovers. One especially malodorous item—the Durian Fruit Pizza—struck his nostrils and his taste buds. Those who have sampled the unique durian fruit have said it smells something like turpentine and onions, but the adventurous LaMarca is eager to give it another try. “The taste is indescribable, a flavor I’ve never experienced before. My attitude is, when in Shanghai…”

As a China rookie, Samosky says he’s “nervous and excited” about the event. “I’m really eager to go. This is such a great opportunity to experience the culture of one of the most ancient civilizations in the world. I expect to bring one or two things back to my shop that my customers may have never seen before.”

The Best Year Ever

Samosky and LaMarca believe the past year has been the best ever for the American team of skilled chefs and pizzathletes. Team members’ confidence has peaked at an all-time high. “This year’s trip to Parma was awesome,” Samosky says. “In the Pizza-for-Two category, Mike and I scored eighth place, which was the best culinary finish in many years for our team. We made a Gorgonzola sauce and candied-bacon pizza with pancetta, arugula and balsamic caviar. In previous years, we were too intent on bringing over American-style pizzas that the Italians really don’t like. With our current team, we’re learning more about the science of dough-making and pairing complementary toppings.”

As a leading force behind that upsurge, LaMarca wants to encourage more pizza chefs around the country to take part in qualifying competitions, such as the event PMQ will sponsor at the International Baking Industry Exposition (IBIE) October 8 to 11 in Las Vegas. “The USPT will help facilitate a great culinary competition, and the winners will earn a trip to Italy for the World Pizza Championship next spring,” he says. “We’re looking for more of our West Coast team members to sign up for the event. We’re also always looking for new team members—talented pizza chefs who want to take advantage of the great networking and promotional advantages we share as USPT members.”

LaMarca adds that having telephone access to the top pizza IQs in the country is a USPT benefit you can’t put a price on. “As a team member, if I have a question about a product, ingredient or marketing strategy, I’m just a call away from some of the top pizza minds in the industry,” he says. “They have helped me expand my skills, my strategic vision and my pizza business.”

The USPT train keeps rolling. Next stops: Sin City and the Shanghai Express.