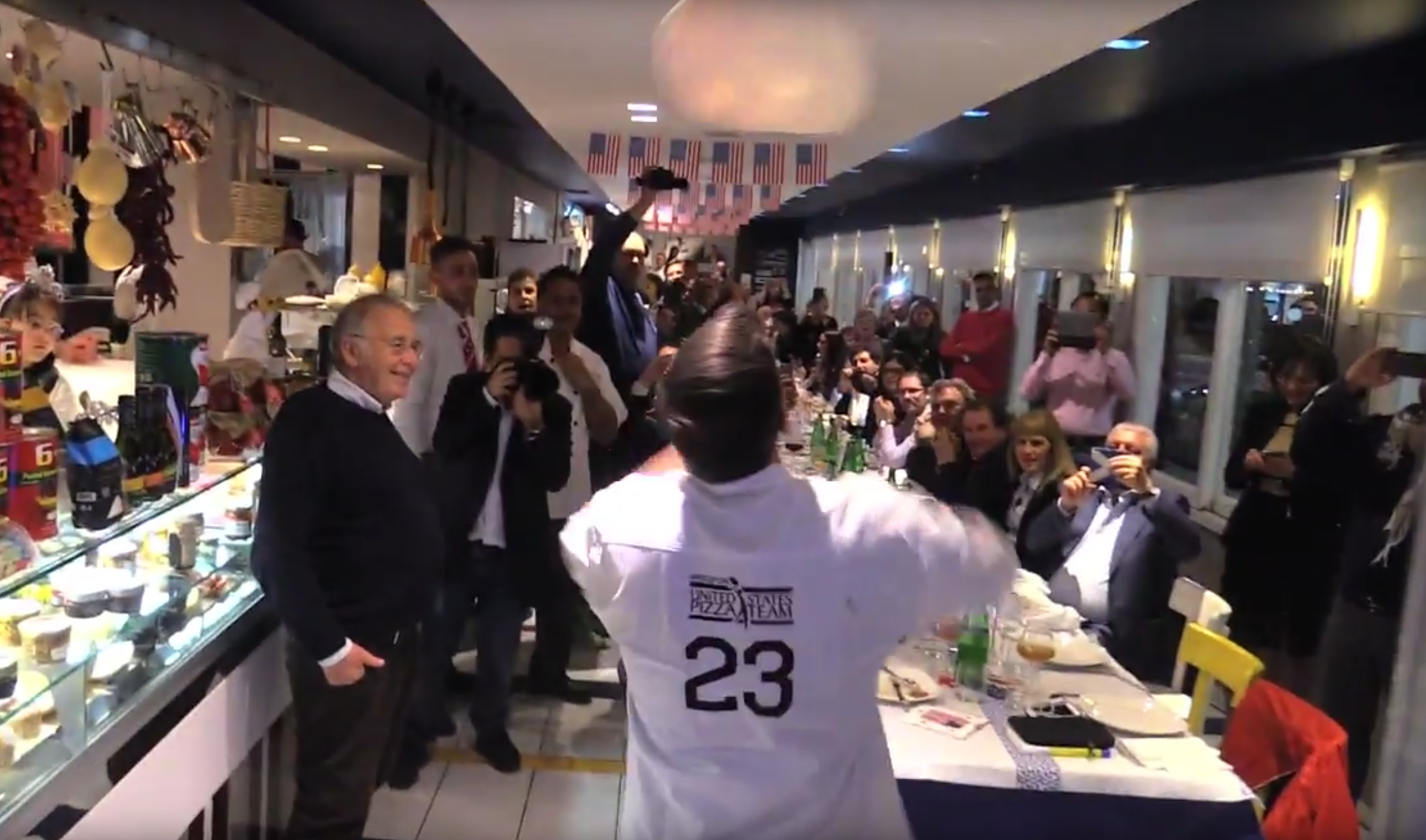 World­ renowned pizzaiolo Antonino Esposito is a familiar face in Sorrento, Italy. His face is everywhere, including on the city’s welcome billboard. If one visits Sorrento, it’s easy to see why Esposito is so in love with his hometown. The sun­kissed town, perched high atop sheer rock cliffs on the Mediterranean Sea has a dreamy, almost magical quality.

It’s no small wonder then, that out of Esposito’s numerous endeavors in the pizza industry, the one closest to his heart is the seaside restaurant Acqu’e Sale perched under Sorrento’s staggering cliffs on the shoreline, in the shadow of nearby Mount Vesuvius. It was here, he invited members of the Groupon U.S. Pizza Team for a special event called Quattro Mani (or “Four Hands” in English.) two days after the conclusion of the World Pizza Championship in northern Parma. “I’ve known Antonino for a while now. I met him through the Italian flour company he works with. We’re very good friends. He’s stayed at my house,” recalls USPT’s Gino Rago of Panino’s in Chicago. “I was invited to do this last year, but couldn’t accept due to health problems.”

Gino led a troupe that included fellow Panino’s collaborators Leonardo Rago and Bruno Brunetti, World Champion Acrobatic Pizza spinner Jamie Culliton, Cleveland’s Michael LaMarca, and PMQ’s Brian Hernandez. The purpose of their visit was to cook up delicious pies in varying American styles for an audience of over 60 guests – mostly journalists. “There are a lot of funny ideas about American pizza here. Most Italians in this region have never really tried any. I wanted to expose them to it to dispel any myths they might’ve had,” explained Esposito through an interpreter.

As the guests poured in Acqu’e Sale, cameramen politely competed for space, old acquaintances reconnected, drinks began flowing, Antonino went out of his way to welcome everyone, and local musicians started entertaining. Meanwhile, in the back of the restaurant, the American squad were hard at work putting dishes together such as the famous Chicago deep dish, Philly cheese steak pizza, and Master Pizza’s award­-winning Three Little Pigs.

They worked elbow­-to-­elbow with Esposito’s house chefs who were busy with a variety of traditional Italian pies of their own. “It was a such a great opportunity for us to work with one of the best pizza­makers in the world, and use his kitchen and his ovens and watch him as he works. It gives us an opportunity to learn even more. I’m getting a full education in a couple days. It was such a fantastic opportunity to advance my skills to another level,” waxed Michael LaMarca. After a long evening of toasts, jokes, sing­a­longs of traditional Italian folk songs, and an acrobatic exhibition by Jamie Culliton; guests walked away with full stomachs and full hearts, and notepads full of interviews and story pieces for press. The event not only demystified and celebrated American pizza, but also raised the profile of the U.S. Pizza Team in the region.

“I was able to learn so much about the process of making pizza in Italy, from dough creation, to ingredients and flavor pairings. I think we made a good impression on the Italian media, and I hope they walked away with a better understanding of American pizzas and the realization that we our pizzas are not that different after all,” affirmed Hernandez. “We learned a lot. We worked really well together. We had a good time. I can’t believe we’re here in the Naples region, the U.S. Pizza Team, making pizzas. It’s like a dream. We would do it again,” proposed Gino. “Oh my God, absolutely!” agreed Culliton.