The U.S. Pizza Team consists of expert pizza chefs and dough-spinning acrobatic performers from pizza restaurants across the United States. The squad won the Team Acrobatics World Championship in Salsomaggiore in 2011.

In this year’s event, team member Greg Spaulding, an employee of Lexington, Kentucky-based Puccini’s Smiling Teeth, won the Best in the U.S. Award in the Classic Pizza category. His colleague Tom Carfrae, owner of Tomaso’s Pizza in Cedar Rapids, Iowa, earned Best in the U.S. in the Pan category, while Mike Amheiser, owner of Pizza Dock in Fredericktown, Ohio, took home the Best in the U.S. prize for his Gluten-Free pie.

Hundreds of pizza makers participated in the international contest, which took place April 16-18 and featured culinary competitions as well as Freestyle Acrobatics and Dough-Stretching categories.

The entire 2012 event was aired live via streaming video at the team’s official website, uspizzateam.com, and at pizzatv.com. Recorded footage of the event can still be viewed at pizzatv.com.

PMQ Pizza Magazine, the leading national trade publication for the pizza industry, created the U.S. Pizza Team in 2000. “This year’s championship event was quite a challenge, and our team members worked hard to excel against some formidable competition,” said PMQ publisher Steve Green. “Most importantly, they served as worthy ambassadors to the global pizza community and proved that American pizzaioli can hold their own against the best pizza chefs in the world.”

Visit worldpizzachampionship.com to learn more about the 2012 World Championship of Pizza. For more information about the US Pizza Team, visit uspizzateam.com or contact Brian Hernandez, Event Coordinator at brian@pmq.com, 662-234-5481 x129. 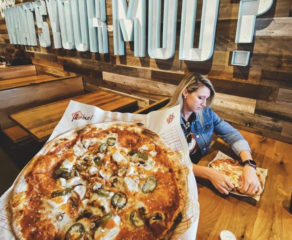