Three dough pros showed the nation they have what it takes to lead the United States to a World Pizza Championship later this year.

Brian Edler, Michael Shepherd and Georgio Giove all earned a spot on the U.S. Pizza Team at the Acrobatic Trials held at the International Restaurant and Foodservice Show of New York City in January. These three men earned an all-expense paid trip for two to Salsomaggiore, Italy in April.

"(The greatest thrill in winning a spot on the U.S. Pizza Team) was probably seeing that all these years of tossing pizza got me a trip to Italy," Shepherd said. "I prepare when I'm making pizzas by practice throwing and spinning and stretching. I also come in when I don't have to be here (at work) and practice."
Edler led again in the fastest pizza maker contest with a winning time of 20.37 seconds; Giove came in second with a time of 31.87 seconds and Shepherd took third with a time of 43.5 seconds.

"I focus on making great pizza fast," Edler said in a USA Today feature on the team. "Great is more important than fast, but you can do both if you concentrate." 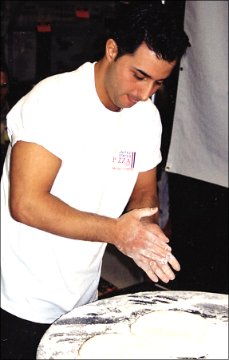 "We believe that it is possible for the team to come back with a world title in the fastest pizza maker competition because Brian became 'America's Fastest Pizza Maker' and was recently a national Domino's Pizza Maker Champion," Tony Gemignani, coach of the U.S. Pizza Team, said.

"We will be among the best pizza tossers in the world when we go to Italy," Giove, who has dual-citizenship in the U.S. and Italy. "But I believe with hard work we can come out on top like Tony [Gemignani, the team coach] has five times."

The new members of the U.S. Pizza Team have received much national attention. This year's contestants and winners appeared on CNN News, Wednesday. USA Today, The Findlay Courier, The Macon Telegraph, the Food Network and many other media outlets provided coverage of the Acrobatic Trials.

The U.S. Pizza Team is an effort on the part of industry leaders to bring publicity to the pizza industry and the people who make it. This year's sponsors are listed at the top of this page.