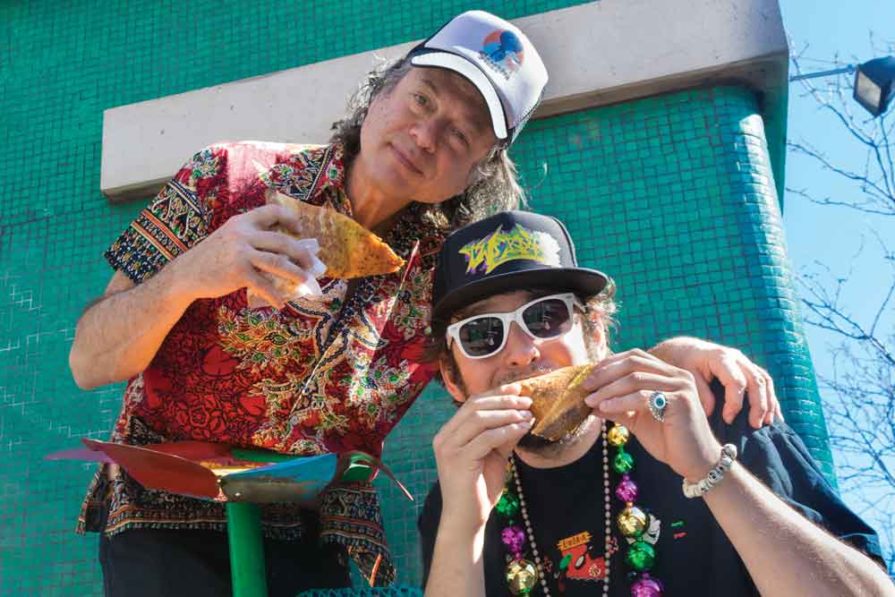 Our April feature story, “Free Spirits,” spotlights the wildly colorful and quirky Two Boots, with a network of stores all around New York as well as in Jersey City, Stamford, Connecticut, Baltimore, Los Angeles and Nashville. Due to space limitations in our print magazine, we hit some of the highlights and saved a few for our website. Here’s a Q&A with Two Boots owners Phil Hartman and Leon Hartman:

PMQ: Two Boots has one of the best pizzeria websites I’ve ever come across. What’s the story behind it?

Leon Hartman: The website is what drew me back into the family business and helped me to better understand where we were as a corporation. In 2012 we still had the same site we’d had since 1998. I wanted to look for ways to modernize and streamline the company and improve our cultural dynamic. But to tell the company’s full story on our website meant I had to understand the full story. That was the perfect opportunity for me to lift the hood and look underneath, just as our 25th anniversary was coming up … We have so much going on, more than almost anyone else in the restaurant industry. No one brings as much to the table in terms of local art and community involvement, talented, interesting fans and celebrity friends. Dealing with 25 or 30 years of that, it can become overwhelming to figure out what to do with all of it.

Our big challenge was to find a way to position the layout and communicate clearly and effectively a lot of that back story as well as the more intricate details that make us who we are. We wanted to do justice to our fans and give them as much of our back story as we could.

PMQ: You definitely succeeded. The site isn’t just fun to look at, with all the offbeat specialty pizzas, but it’s a fun read, too.

Phil Hartman: Mike Roth, our marketing director, designed the website. He is an amazingly talented guy. Fortunately, he also had a lot of material to work with, thanks to all the artists we’ve commissioned over the years. We’re always finding talented new people to interpret the Two Boots iconography, and Mike did an amazing job of assembling a lot of those elements.

PMQ: Tell us about some of the creative signature pizzas featured on the menu and the website.

Leon: My first flag in the ground for the pizzas was The Dude. [The Big Lebowski] is my all-time favorite movie. I recognized the magnitude of that cult character early on. We’ve had that pizza for a decade now, and that character’s legend has only grown—that pizza is one of our most popular ones.

Phil: We’ve tried to span the generations. A lot of the cultural references in our pizzas are from my time, the 60s and 70s, but I have three kids, and they brought a lot of their cultural references into it. We’ve named pizzas after indie rock bands that have become friends of Two Boots. Each store also has its own home pie that’s a tribute to the local neighborhood. Our Bayou Beast combines Cajun and Italian ingredients—we say it’s the best of both boots. And we do a really good Grandma with organically grown tomatoes.

Leon: In November 2011, during the Occupy Wall Street movement and the Arab spring, we were inspired to tap into that revolutionary spirit and introduce a new vegan pizza called the V for Vegan. It was Guy Fawkes-inspired, and we used vegan cheese for the first time at Two Boots. That was a big step into a new realm for us. We introduced it as a special pie, but like many pizzas now on our menu, it was so popular and got such an incredible response, it eventually became part of our pizza pantheon that’s available in every store. We use a criss-cross of two great, colorful, delicious homemade pestos—one is a basil pesto and the other is a red pepper pesto. The whole thing just pops, it’s made for Instagram. Literally half of our fans’ posts are just about this one pizza because it’s so beautiful.

PMQ: How important has online ordering been to Two Boots?

Leon: Like our antiquated website, we had a similarly antiquated online ordering system that was super-buggy, inconsistent with information and managed by a third party—we had no access to it. We had to update it, but finding the right online ordering partner was really difficult. We went through three or four different companies, building out our menus, getting into all the behind-the-scenes details, figuring out how to integrate it with the website and all of our stores. We went far down the line multiple times—that’s how difficult it was to transition and modernize one of the most critical areas of our company.

Even as a young guy, it was hard for me. So I know how hard it is for some mom-and-pop pizzeria owners in their 50s who have been doing their thing for 30 years. I understand why they’re so resistant to embracing these technologies. They feel overwhelmed and intimidated, and I feel bad about that because they’re missing out on some great opportunities to grow their business. We finally found a spectacular company in ChowNow that’s in business to make their restaurant clients better, not to make a buck off them. They were really dedicated to serving our needs. [Online ordering] is a big part of the restaurant industry’s future. It’s really a big deal. Look at Domino’s and Pizza Hut—they’ve almost become technology companies rather than pizza companies. 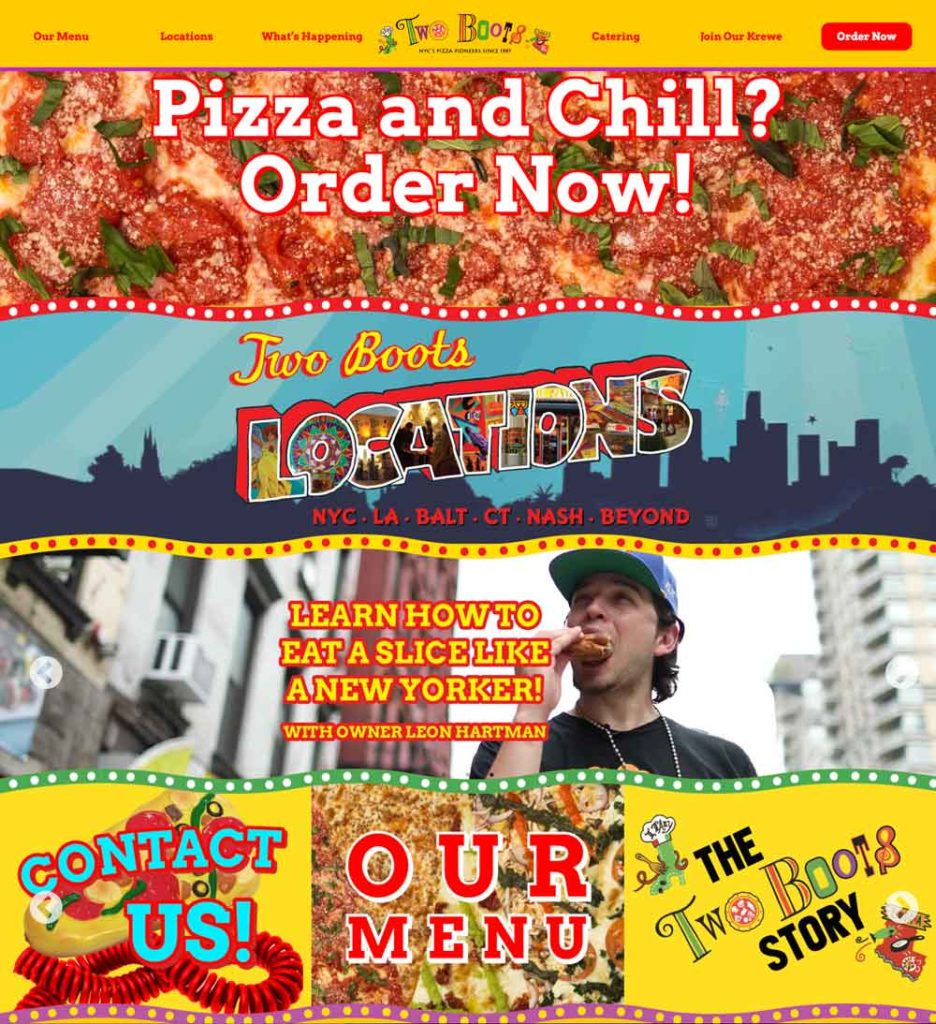 PMQ: Phil, would you have embraced the technology on your own if you didn’t have Leon to push you?

Phil: It’s hard to say. I’m definitely an old-school guy, but I do get the value of it and feel lucky that I have not just a partner, but a son who has helped usher me into the 21st century. It’s still a learning curve for me.

PMQ: One last thing, Leon. I understand you once started your own circus. Tell us about that.

Leon: I’ve studied the arts all my life and play violin. My cousin, Asa Jones, is a tremendous artist and illustrator as well as a kind of mythical character in his own right, like a cross between The Dude and Rasputin, if you can imagine that. He’s a magical character for me, who illuminated me on some of the mysteries of life and brought me into new areas of consciousness. When we all finished college in 2007, we were jonesing to have an adventure and see the country. We started to realize that our talents could all be combined, plus we met more crazy people—some fire-dancing babes, some freaks, more musicians and artists—and it all came together organically. We set out in the summer of 2009 to roam the country in the vein and footsteps of the Merry Pranksters—that was a big inspiration for us. We ultimately made it to California and spread merriment up and down and made myriads of friends. It was called the Magic Bean Circus. There are people all around the world who would tell you they were part of our circus. We’re coming up on our 10th anniversary—we might have to get the gang back together.