Two Boots: Meet the Free Spirits Behind Pizzas Like the Hogwallop, the Dude and the Royal Tenenbaum - PMQ Pizza Magazine 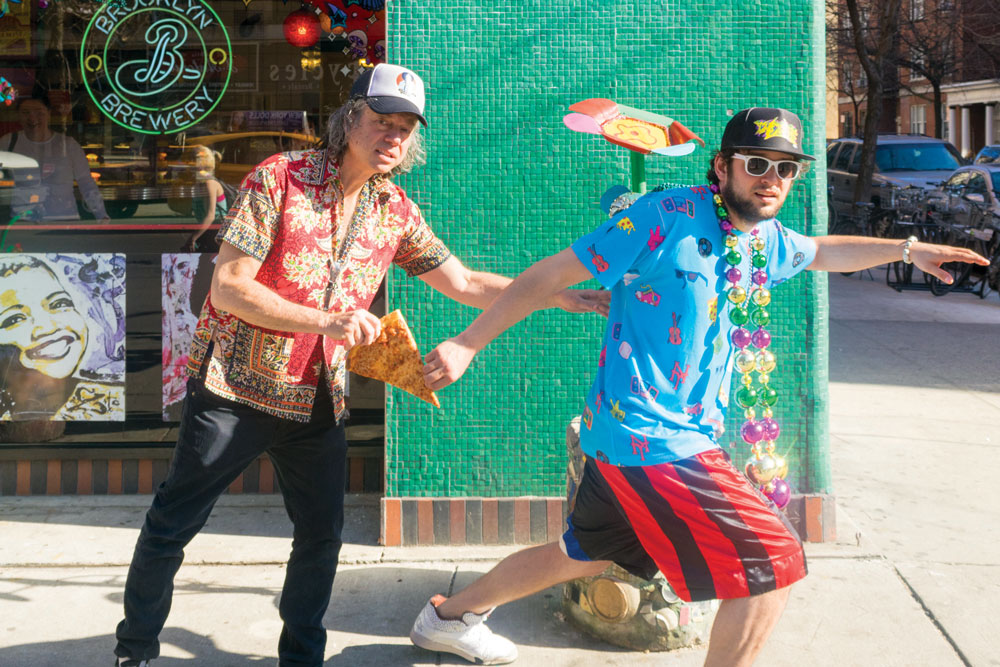 Naming a pizza at Two Boots is serious business.

You can’t just string together a list of ingredients—say, the Bacon, BBQ Chicken, Scallions and Cheddar—and call it a day. No, you give it some deep thought, you search your soul, you ponder eternal cosmic truths, and then it finally comes to you: The Hogwallop.

“Yes, of course,” you say. “The Hogwallop. Thank you, universe.”

OK, maybe it’s not that serious. It’s more like some kind of quirky mojo unique to Two Boots co-founder and filmmaker Phil Hartman and his son/partner Leon, whose sprawling network of 15 neighborhood pizza joints stretches from New York to Los Angeles. They’ve even got a pie called The Mojo Risin’. And if Two Boots looks and feels more like a restaurant you’d find in the French Quarter than Manhattan’s Upper West Side, that’s no accident. Both men love New Orleans and have a genuine affection for the artists, madmen and free spirits who lend color and character to urban life. “When we first opened [in 1987],” Phil Hartman says, “we combined Cajun ingredients with an East Village funky ambience, borrowed some culinary inspiration from New Haven, Connecticut, and came up with something unique. We created this place as a little jewel—it’s a work of art in itself.”

“You’ve got to start with [the basics] as your foundation before you can push the limits. We take a lot of pride in getting our cheese slice down as perfectly as possible.”
—Leon Hartman, Two Boots

Phil opened the first Two Boots—named for the footwear-like shapes of Italy and Louisiana—with his former wife Doris Kornish and real estate developer John Touhey. It wasn’t Hartman’s first foray into New Orleans cuisine—he’d launched a Cajun concept called the Great Jones Café a few years earlier while also working as a screenwriter, producer and director. He and Kornish initially agreed to help launch the restaurant to make enough money to wrap up a film project, but, like the rollicking dance halls and juke joints on Bourbon Street, the temptations of a life in pizza proved hard to resist. “The first shop was in a rough stretch of the East Village that had become a favorite destination for people looking for drugs, not pizza,” Phil recalls. “We knew it was a big change when we came in, and we helped grow the neighborhood. That place was busy, so we opened another one across the street. Then we moved to the next neighborhood and the next one and grew around Manhattan.”

But rapid growth was not part of the founders’ original plan. “This was a different era,” Phil notes. “Now when people open restaurants, they’re immediately thinking it’s a prototype and they’re going to roll out a hundred or a thousand more stores. We couldn’t have been further from that.”

But they also couldn’t turn a blind eye to expansion opportunities. To ensure that each new restaurant had its own personality, Two Boots incorporated elements of the neighborhood, commissioning local artists to create murals, mosaics and sculptures and crafting pizzas, called home pies, that paid homage to the community. That’s the real reason there’s such a pizza as the Hogwallop—exclusive to the Park Slope store, it’s a tribute to actor John Turturro, a neighborhood resident who portrayed the dimwitted Pete Hogwallop in the Coen Brothers’ film O Brother, Where Art Thou?

Every store has its own home pie with an evocative name and a pop-cultural connection. Two Boots Upper East Side offers The Royal Tenenbaum, honoring the similarly named Wes Anderson film about a Salingeresque family from that tony district. It’s even topped with double-smoked bacon from Schaller and Weber, a local purveyor of German-style meats. Over on the Upper West Side, another store serves The Bella, inspired by the women’s rights activist Bella Abzug and featuring a spinach and artichoke dip, cayenne pepper, jalapeños and mozzarella, a combo that “recalls her fiery oratory and inimitable style,” according to Two Boots’ website.

“We know we need to fit in everywhere we go,” Leon Hartman says. “Most people just try to come up with a blueprint that they can rubber-stamp, a hundred at a time. That’s exactly what we’re trying to resist. We want to demonstrate that there’s another way to do this, a way that’s more holistic and more celebratory of the surrounding community.”

Or, as Phil puts it, “Every branch of Two Boots should feel like it grew up through the cracks in the sidewalk of that neighborhood, not like some UFO that appeared from above and just plopped down there.”

Other specialty pizzas run the gamut of pop culture, from The Dude, inspired by Jeff Bridges’ laid-back character in The Big Lebowski, to The Mel Cooley, named for the high-strung straight arrow who was the butt of a thousand bald jokes on The Dick Van Dyke Show. Newman on Seinfeld has spawned not one but two pies at Two Boots. “I’m a big fan of second bananas,” Phil explains, in a company video on the website. “Like with [rock band] The White Stripes, we wouldn’t name a pizza after Jack, but we did name one after Meg. We like the weird, dark character in the background.”

Each Two Boots store has the vibe of an art gallery, teeming with original pieces created by artists such as New Orleans’ Nilo Lanzas, New York sign painter Amanda Hagy and Asa Jones, a relative of the Hartmans who painted the weird and wonderful Two Boots Tarot in the Bleecker Street location. One stunning mosaic at the Upper West Side store depicts Abzug and John Lennon; other stores feature artistic renderings of film icons like Cleopatra Jones and real-life personalities such as actor Luis Guzman and musician Charlie “Bird” Parker.

The Two Boots website, overseen by Leon and designed by marketing director and artist Mike Roth, reflects that offbeat esthetic. It’s a marvel of online marketing, loaded with eyepopping visuals, sliders with snappy descriptions of every pizza on the menu, and brief but smartly written articles about the origin of Two Boots and Phil’s own illustrious back story. The splash page points visitors straight to the online ordering section, along with a tongue-in-cheek Zagat video featuring Leon sharing tips on how to correctly eat a slice.

But funny pizza names, charismatic owners and visual splendor can only take a pizzeria so far. It’s the pizza that has made Two Boots famous. “It’s all about the crust,” Phil says. “We feel like what we’re doing is unique, but we’ve borrowed ideas from some of our favorite places. New Haven has always been an inspiration for us; we borrowed the cornmeal they put on their rectangular pans at places like Frank Pepe Pizzeria Napoletana or Sally’s Apizza. But we took it to another level. Our corn meal is actually embedded in our crust—we use it instead of white flour. It gives the pizza a nutty, crunchy taste. At other pizzerias, you’ll see a pile of crusts in the middle that everybody’s put away, but that’s rarely the case at Two Boots. We use a great cheese from Galbani and a unique spicy sauce, plus lots of organic and Cajun ingredients. But the foundation is the crust.”

Every Two Boots serves a Grandma pizza and a Sicilian, along with a gluten-free pie using a crust from a vendor in California. Then there are the Big Easy-style pies like the Bayou Beast, topped with spicy shrimp, crawfish, andouille sausage and jalapeños, and the Swamp Witch, loaded with alligator sausage, crawfish and a crisscross drizzle of sweet red pepper and jalapeño pesto. But the company focuses on the basics, too. “We’ve got a lot of crazy pizzas, but we also make a killer slice of cheese and pepperoni,” Phil says.

Leon agrees, adding, “You’ve got to start with that as your foundation before you can push the limits. We take a lot of pride in getting our cheese slice down as perfectly as possible.”

Two Boots has become such a Big Apple institution, the New York Mets made it the official pizza of Citi Field. The company has locations throughout the park, doling out slices of tribute pies like the Meat the Mets (a takeoff on the team song) and the Happy Hour Recap (an homage to the late Mets broadcaster Bob Murphy). For superfan Leon, selling pies at ball games fulfills a childhood fantasy. “When I was nine or 10, we were at the old Mets stadium,” he says, “and I remember telling my dad, ‘Wow, wouldn’t it be cool if Two Boots worked with the Mets?’ Lo and behold, they reached out to us!”

“Every branch of Two Boots should feel like it grew up through the cracks in the sidewalk of that neighborhood, not like some UFO that appeared from above and just plopped down there.”
—Phil Hartman, Two Boots

Famous with the Famous

Two Boots’ pizza is so famous that famous people seek it out, but Phil, who has produced and directed films with Felicity Huffman, Will Arnett and Steve Buscemi, isn’t exactly the star-struck type and doesn’t make a big deal about it. “Jimmy Fallon is a longtime Two Boots fan and came to our opening in Williamsburg,” Phil says. “He even got behind the bar and served beer. But we didn’t post anything about it on Facebook or Instagram because we respect his privacy. Then, the next morning we found out that Rolling Stone had been there that night and had posted a picture of Jimmy, which had already gotten, like, 250,000 likes. That’s not something we would have done, but they let the cat out of the bag.”

In the interview for this article, Phil and Leon didn’t even mention that an episode of Sex and the City shows Sarah Jessica Parker and Cynthia Nixon’s characters chowing down on slices in the Two Boots to Go West store in Greenwich Village. If that’s not New York-legit, we don’t know what is. But the Hartman men are too busy thinking about their next opening—in New York’s Financial District—and scouting locations in the Chesapeake Bay area and L.A. (and maybe New Orleans) to rest on their laurels. Most of their locations are company-owned, although a couple of licensees who are certified Two Boots superfans have opened shops in Nashville, Jersey City and Brooklyn. “If we meet someone who really understands and believes in the brand, we get excited to work with them, but we try to focus on company-owned stores,” Phil says.

“We’re definitely in a growth mode,” Phil adds. “I’ve learned the hard way that I can’t run the business the same way I did when we had one or two stores. Leon’s helping me put in the systems and structure that will enable us to grow. But we’re always going to do it our way.”

Leon, a chip off the old Hartman block, echoes his dad’s thoughts. “We want to maintain our identity, soul and integrity wherever we go, while being nimble and flexible and ready to adapt to the modern marketplace so we can serve as an example and inspiration to others,” he says. “We’re going to keep it real while we grow our footprint and make more people happy around the country. That’s our goal.”