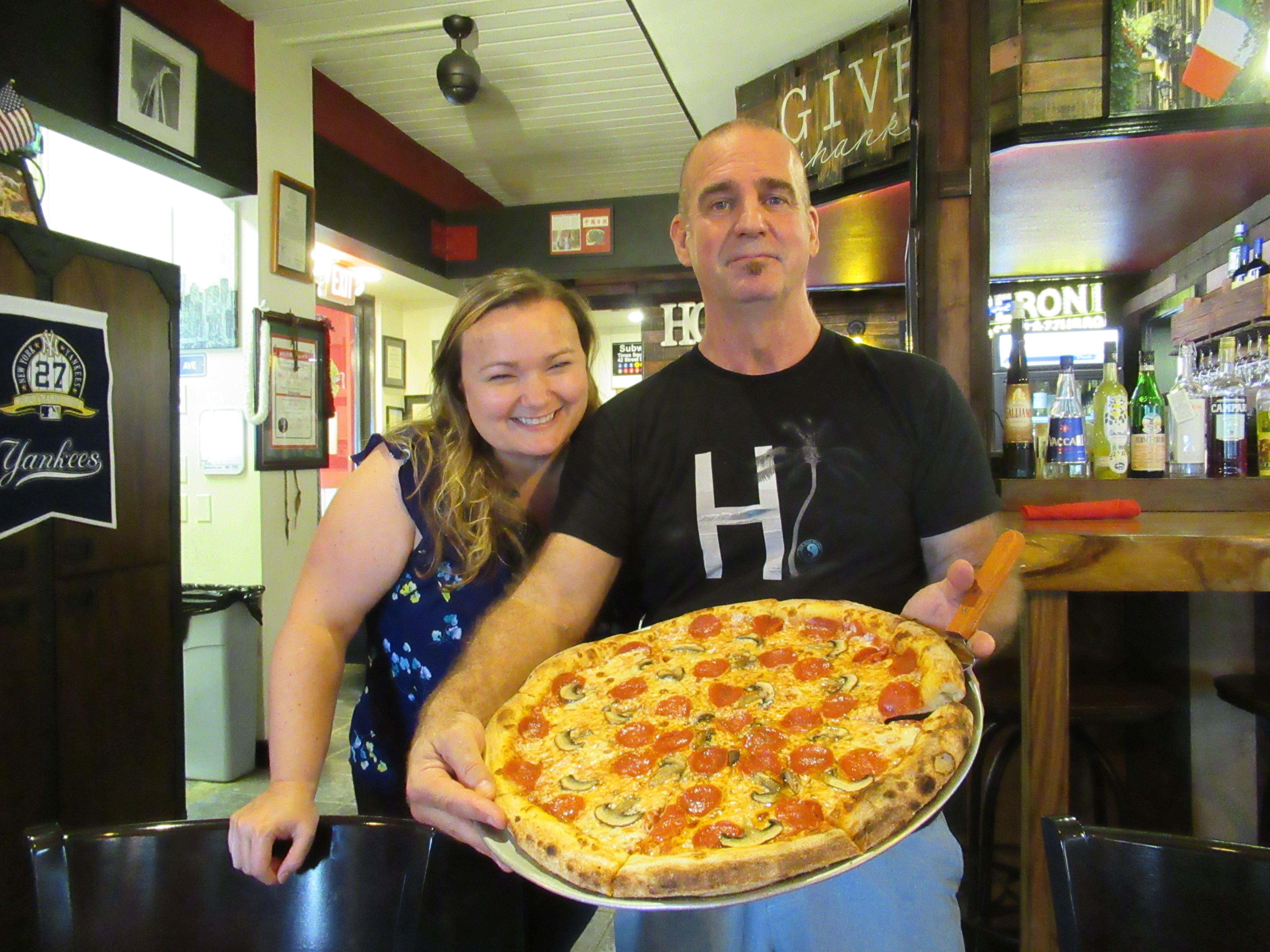 A letter from a long-time PMQ reader inspired my most recent trip to Hawaii.

It's been 20 years since I last visited the North Shore of Oahu, and that trip only took place because a girl at my last job had an extra ticket (right place, right time).

This time, I received an email in December of 2017 from Tommy Iannucci. He wanted to touch base and let me know that he had been having success with his pizzeria on Kauai.

That’s not too unusual on its own; we hear from a lot of successful pizzeria operators.

But I remembered Tommy from an article he wrote for PMQ back in 2008. It was about his personal love for pizza and a pizzeria called Colenti’s that he enjoyed on the island. Back then, he regularly cooked pizzas at his house for friends and family, but he didn’t own his own place.

Now, he told me that he had gone to Italy to study with Enzo Coccia and opened the first VPN-certified pizzeria in Hawaii.

How cool is that?

I knew I had to go see his place.

So, my husband Benjy and I booked a trip to Hawaii. We had been wanting to go for a while and this was the perfect nudge we needed.

We wanted to experience both the busy and laid-back sides of the Aloha State, so we planned to spend a few days on Oahu and Kauai. Tommy offered up some great travel tips, since he’s lived in Hawaii for three decades.

Landing in Oahu, we already knew we wanted to see what types of pizzas were available. What is “Hawaiian pizza” in Hawaii, anyway? We were about to find out.

Surprisingly, most pizzerias in Hawaii offer the typical Hawaiian pizza we all know—topped with ham and pineapple. The tourists expect it, so they have it. That’s just good business, if you ask me. Sorry, pineapple-on-pizza haters!

But, for those looking for ingredients more local to the area, you’ll find plenty of pizzas topped with Kalua pork, spam, rice, Portuguese sausage and a variety of other regional ingredients. These are popular with the locals and provide visitors like us with something unique to try.

I noticed a lot more pizzerias than I thought I would, too. After writing PMQ’s Pizza Power Report and following the industry numbers for so many years, I expected pizza to be scarce in Hawaii. It was just the opposite. We found it in malls, stand-alone restaurants, walk-up windows and more. Even Tommy said that he’s noticed more pizzerias opening on Kauai since he opened his pizzeria.

After exploring online reviews, asking for recommendations, and narrowing our choices, we ended up at the following pizzerias.

Located on the top floor of a popular mall in the middle of bustling Waikiki, and overlooking a Tesla dealership, we expected sky-high prices at this pizzeria. However, we arrived during happy hour on Halloween night and enjoyed a NY-style pepperoni pizza that arrived with crispy crust and cupped pepperoni for a steal.

Flour & Barley is owned by Gen3 Hospitality, which operates the national restaurant chain Elephant Bar and three other Las Vegas-based restaurants. The Waikiki location of Flour & Barley is the pizzeria’s second location, with Las Vegas being its first. Notable menu items include a Caputo Cup award-winning gluten free pizza, a Hawaiian pizza with grilled pineapple and mushrooms, and a lasagna pizza. 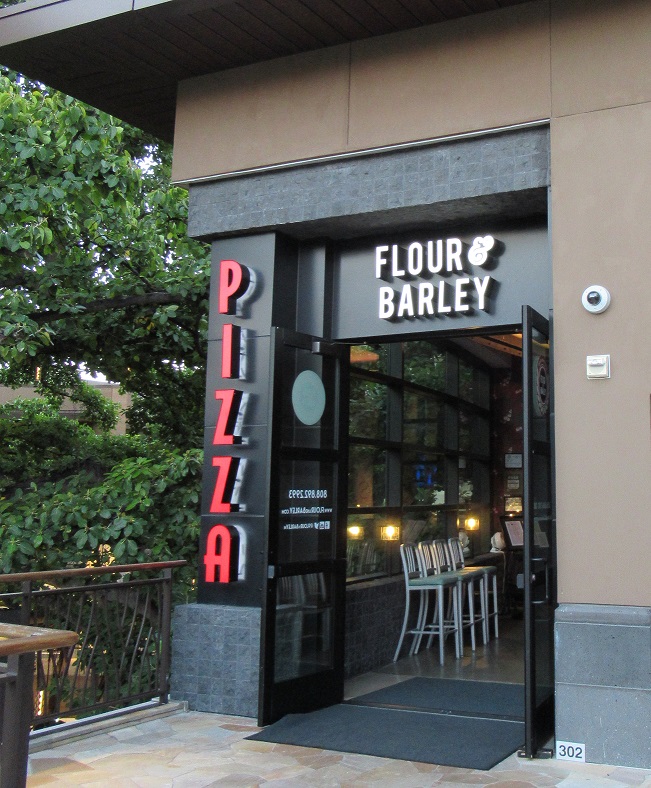 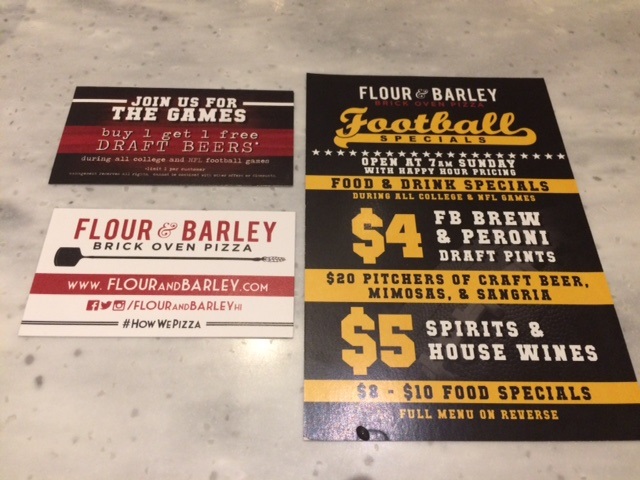 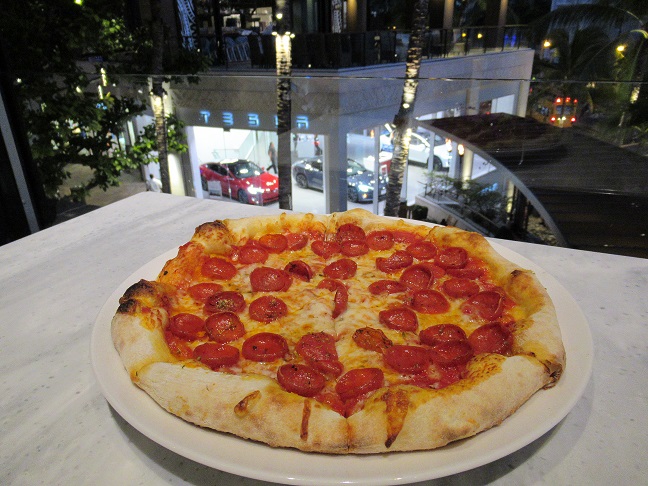 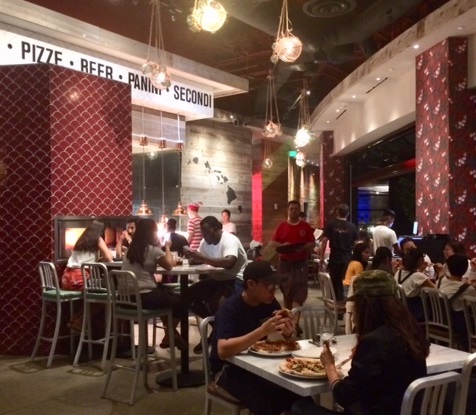 This pizzeria came highly recommended by Albert Grande of PizzaTherapy.com who lives in Hawaii. Unfortunately, Albert was out of town when we were visiting and couldn’t join us for lunch. But, we arranged to meet up with Brick Fire Tavern’s owner, Matt Resich, who has been creating gourmet Neapolitan pizzas since late 2016, and received VPN-certification in early 2018.

The interior of Brick Fire Tavern is cozy, with brick walls throughout and a view of the wood-burning oven from nearly every seat.

Matt is doing really fun and creative things, including egg yolk as a topping (just the yolk, no egg), and a "real Hawaiian" pizza that he tops with Kalua pork and watercress lomi tomato salad, which is delicious.

Located in an up-and-coming section of Honolulu’s Chinatown, Brick Fire Tavern already has a long list of fans, which are sure to grow in the coming years. 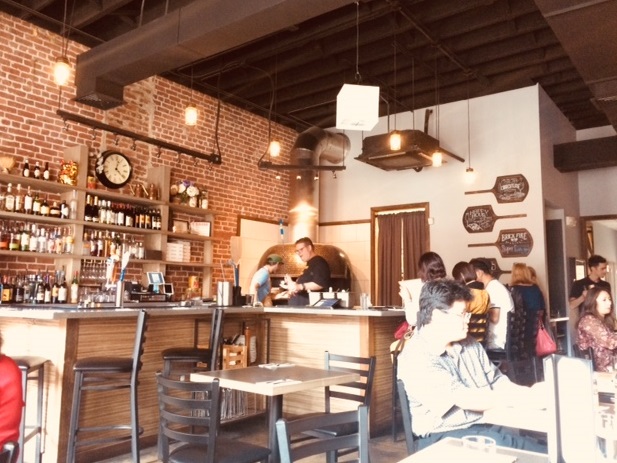 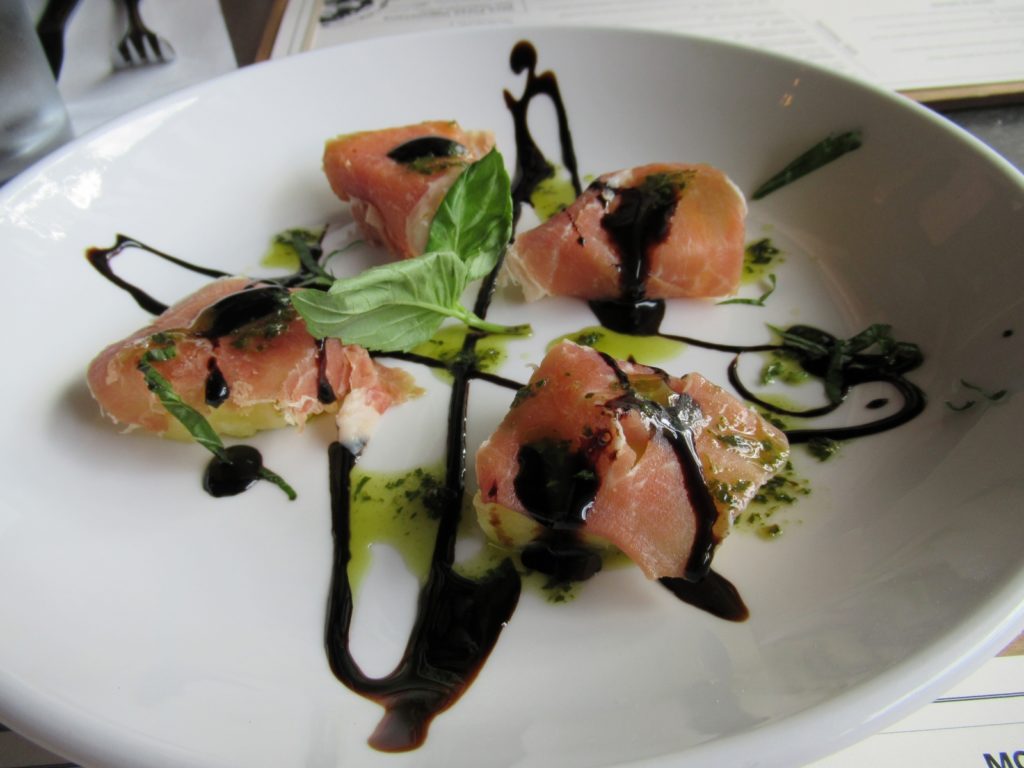 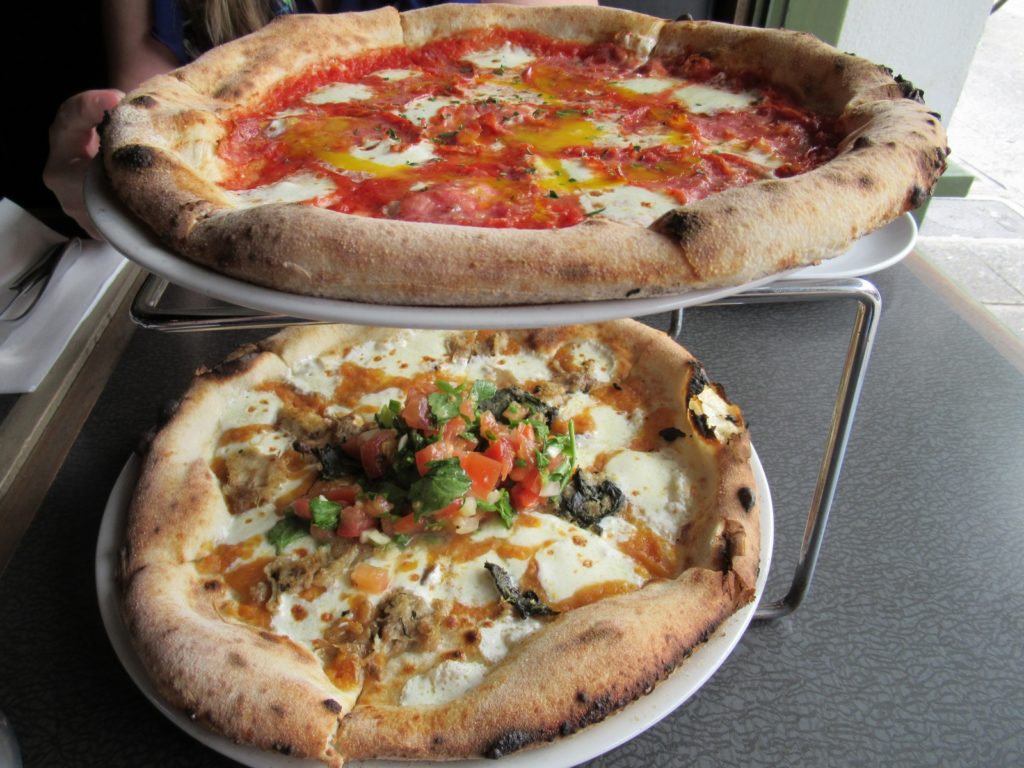 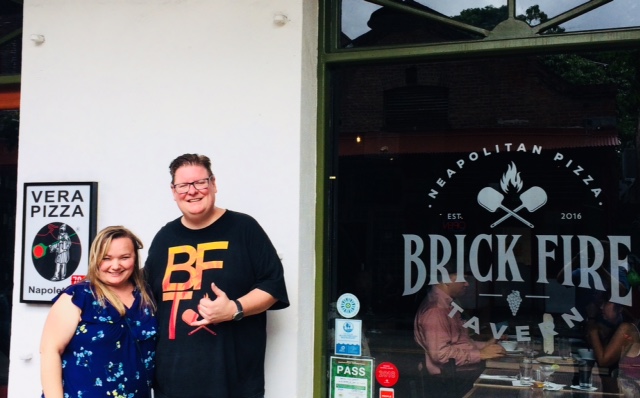 We ended up at this pizzeria by pure chance. We were initially going to grab something quick inside our hotel but couldn’t decide on anything. We walked outside and made it about a block before a guy passed by us carrying an armload of delicious-smelling pizzas.

Benjy asked where he got the pizzas and he pointed down the street and said there was a basement dive bar with great pizza. That’s all we needed to hear.

We ordered a Harbor Combo (the works) pizza to-go and watched as a steady stream of locals and tourists poured into the dimly-lit space across from the Honolulu marina and directly underneath a steak and seafood restaurant. For those seeking something more regional, Harbor Pub offers a ham-and-pineapple pizza along with one topped with local Portuguese sausage. The pub has been peddling pizzas, sandwiches and burgers since 1980. 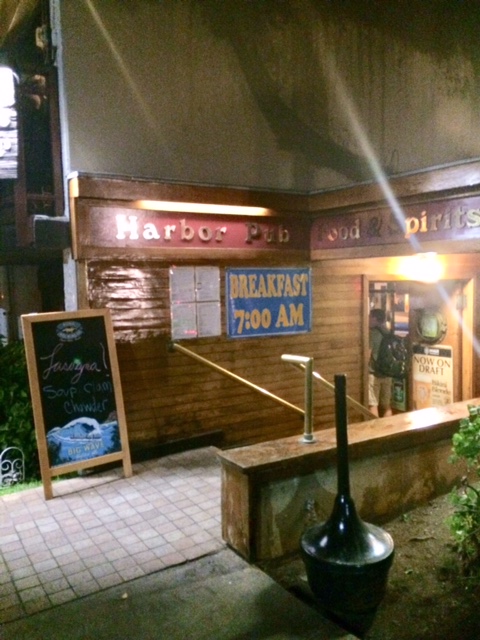 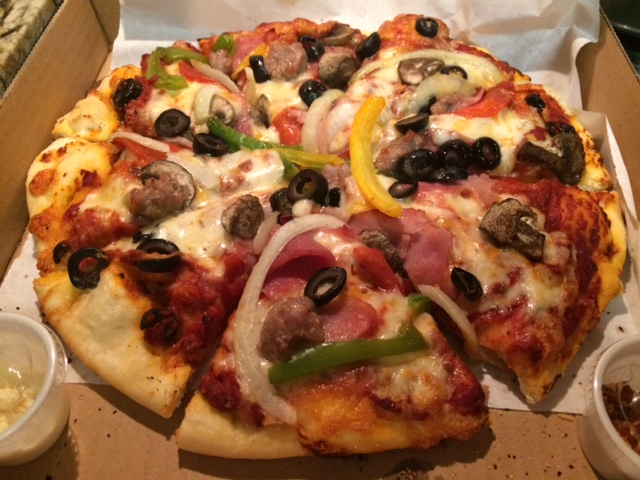 OK, we finally made it to Kauai, and booked a room in a charming inn that was walking distance from Tommy’s pizzeria.

As I mentioned, Tommy opened Pietro’s in 2016 and spent a month in Italy training with Enzo Coccia. His pizzeria was the first VPN-certified establishment in Hawaii, and serves Neapolitan-style pizza in the main dining room and NY-style pies and slices on the patio from a walk-up window.

A little background on Tommy, he’s originally from New York, a former Marine and former police commissioner and a local pastor who has been married to his Kauai-native wife D’Lissa for the past three decades.

We had plans to meet up with Tommy on day five since he was working on renovations for his second location, but he texted to let us know he was around if we wanted to stop by for pizza. You know our answer.

We arrived and chatted with Tommy and D’Lissa over a meat tray appetizer and two fantastic Neapolitan pizzas that came out of the pizzeria’s vibrant blue-tile wood-burning oven.

Unable to finish the pies, we wrapped the leftovers and agreed to meet up with Tommy the next day for a tour of the island.

Touring Kauai with Tommy the next day was a blast. He showed us all his favorite sites, his spot for a great burger and fries, and we even got hustled by a lemonade-selling tween from California trying to sell us a parking spot.

We capped off the day by sharing a pepperoni and mushroom New York-style pie at Pietro’s. It was a huge 20-inch pie that normally would get cut up into slices for the lunch crowd.

Before we left Kauai, we got a sneak peek of Tommy’s second location in Poipu, which is currently in the works. It’s about 15 miles from Lihue, in a much larger space, where he plans to do more pizza experimentation. We’re looking forward to seeing it come to life. 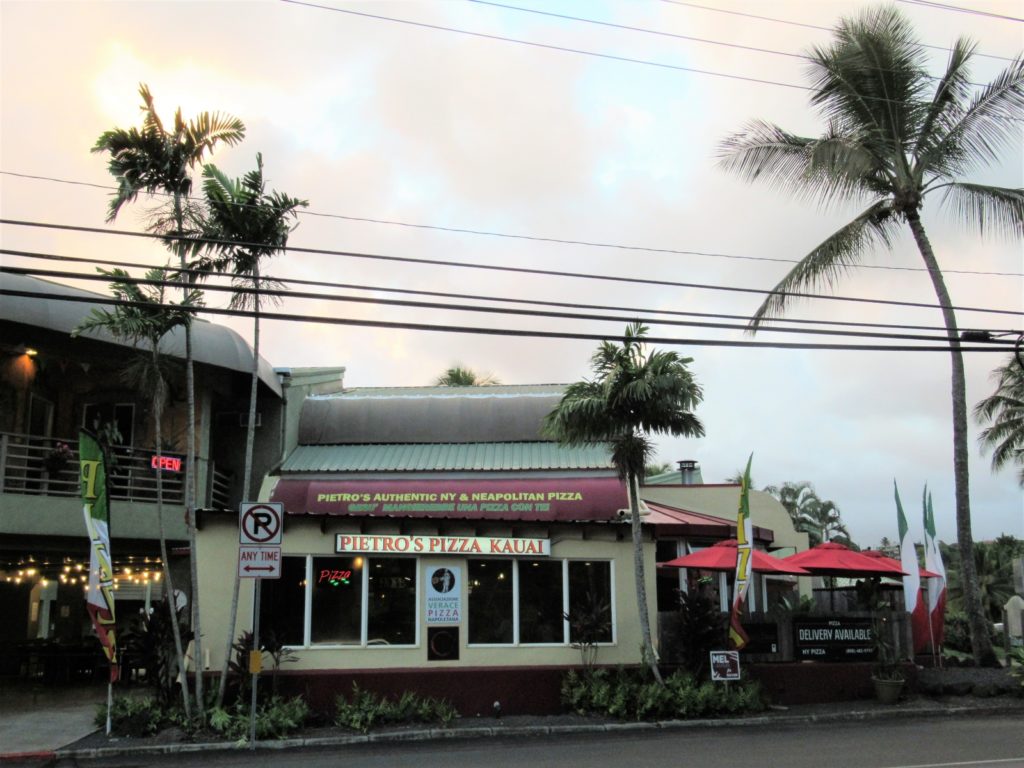 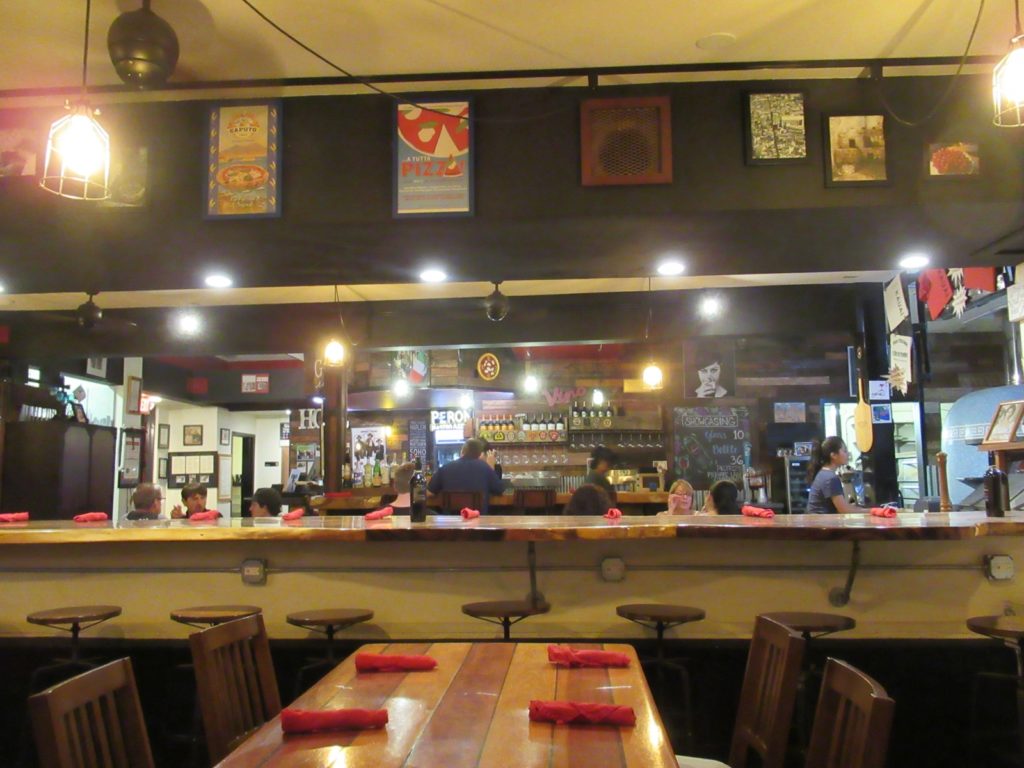 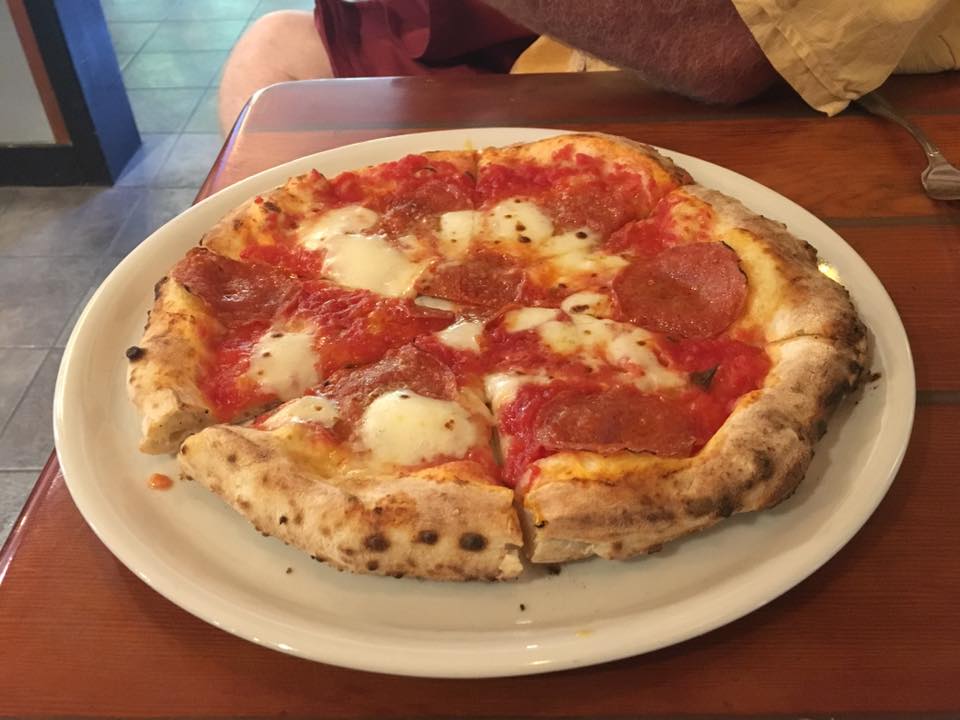 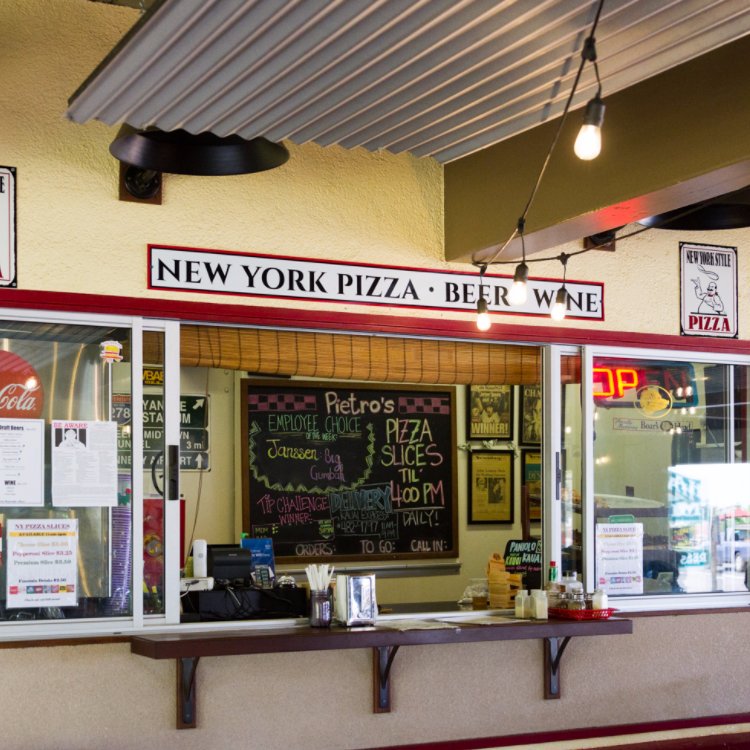 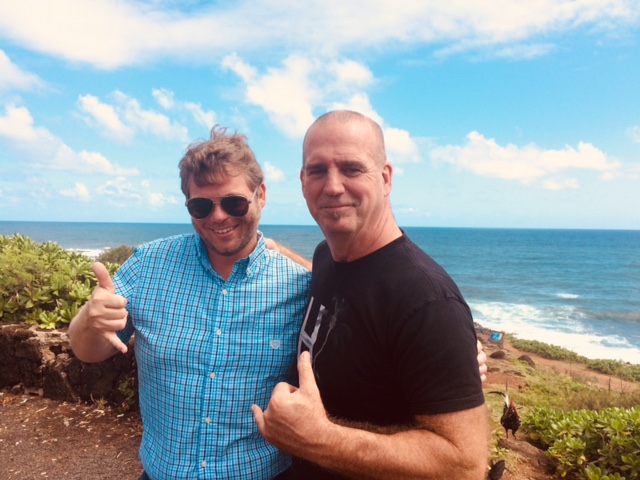 RELATED: The invention of Hawaiian pizza

We decided to stop at Nawiliwili Tavern at the suggestion of Kevin, our Uber driver on Kauai. I’m referring to Kevin by name because even though we only knew him for one day, he picked us up when no other Uber drivers would, showed up out of the blue and potentially saved our lives when we naively walked along a busy road in the dark, and turned out to know a mutual pizza comrade—Scott Wiener (he roomed with Scott’s brother in college). Anyway, when Kevin told us that he always goes for pizza at Nawiliwili Tavern after his shift, how could we turn down his recommendation? I mean, we gotta eat, right?

The plan was to order the pizza over the phone and pick it up since it was getting late. However, the young lady who answered the phone said that they stopped taking phone orders due to pranks. We’d need to order in person.

We walked over to the Tavern, and I could tell immediately that it was an ideal place for locals to hang out after work and knock back some beers while enjoying some slices. It had a huge wrap-around bar alongside some tables and a section to play pool.

We ordered a Hula Kalua, which is roasted and shredded Kalua pork on top of mozzarella and topped with a house made sriracha aioli. It was crunchy and had a little kick, precisely the type of pizza you want to pair with a frosty beer. 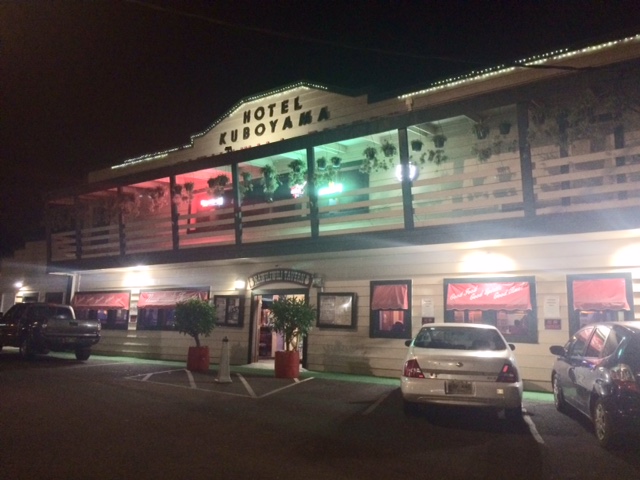 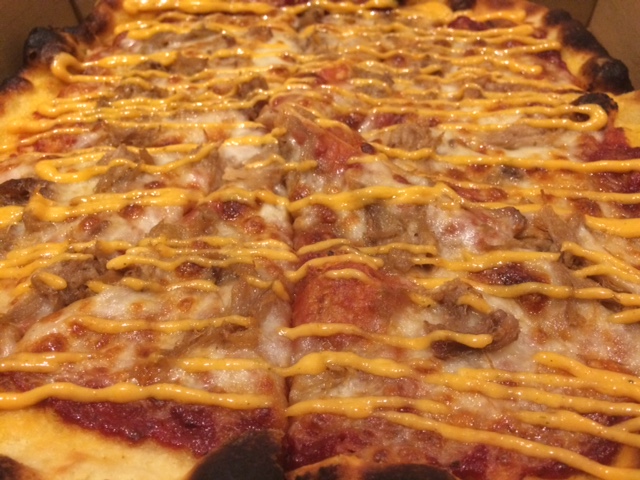 Overall, we found that Hawaii is filled with pizza choices. We saw thin crust, NY-style, Neapolitan and more. The pizzerias we visited all attempted to include something regional on their menus, whether it was Kalua pork, pineapple or a homemade sauce using local fruits or vegetables.

I’m thinking that the idea to use local ingredients on the pizzas in Hawaii may have been picked up during multiple visits to the West coast.

Most of the locals we spoke with said that when they travel, they usually go to California and Las Vegas. If they were eating California-style pizza while they were there, they naturally picked up some of those gourmet or artisan pizza practices and brought them over.

If one thing is for sure from experiencing Hawaii's pizza scene, the number of pizzerias, and pizza variety, will continue to expand.