How Did a Private Detective Become the Founder of Veggie Power Vegan Pizzas? - PMQ Pizza Magazine 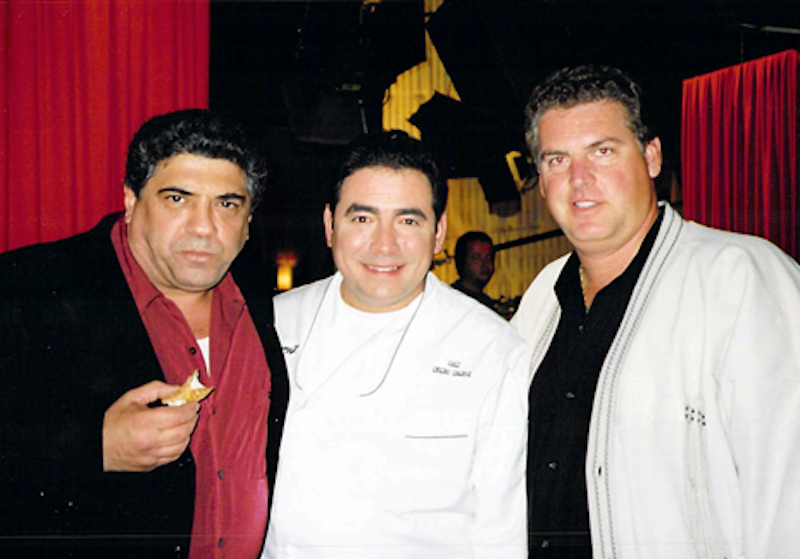 Tony DeLorenzo (right) with two of his famous friends, Vincent Pastore of "The Sopranos" and Chef Emeril Lagasse

Tony DeLorenzo has always loved pizza, starting with that first slice his father, a matrimonial private detective in New Jersey, bought him when he was six or seven. “I can still taste it, a great sauce and delicious cheeses,” Tony says. “And, ever since, I’ve had a love affair with pizza.”

By the time Tony was in his mid-twenties, he still craved pizza, only now he was also president of the private investigative firm founded by his father. From the beginning, Tony knew the best way to build his firm’s reputation was with excellent service, never sharing a client’s secrets, and getting as much publicity for the firm as possible, turning his natural talent for telling a good story into media appearances. At just 25 years old, he was already appearing on national television, including ABC News. In the ensuing years, Tony would become nationally known, with guest appearances on Oprah, 20/20, The Today Show, Anderson Cooper and dozens more, including interviews on British and Australian television and hundreds of radio shows.

Tony’s swagger, charm and ability to entertain—by explaining how matrimonial private investigators navigate delicate and potentially dangerous cases involving infidelity and deceit—led to his writing two books on the topic, as well as starring in a reality TV show on TLC. By the age of 35, the kid who loved pizza with his private detective father was now the head of the country’s largest private investigation firm. “But, after decades of snooping, I decided I had enough,” Tony explains, “and I went into semi-retirement.”

But for someone with Tony’s love for life—and for great pizza—semi-retirement wasn’t the answer, especially after he had a chance encounter with an associate who was making a cauliflower pizza crust and gave Tony few samples to take home and taste. That crust didn’t meet Tony’s high standards honed from a lifetime of eating all kinds of pizzas. “But what I liked was the health benefits of eating a cauliflower crust,” Tony says. A few years before, Tony had begun to change his diet and lifestyle into a decidedly healthy direction. He became intrigued with the idea of producing his own line of cauliflower pizza crusts.

He set his sights high, in true Tony style, just as he did in building his very successful private investigation firm. He searched for the best manufacturer, giving them strict criteria: the best vegan ingredients, non-GMO, gluten-free, with very low carbs and calories. In short, this was to be the best vegan crust made. He was equally demanding on the quality of the vegan cheese, selecting the world’s best brand, Violife Vegan Cheese. Same with the sauce, insisting that the manufacturer start with the identical sauce they sell to high-end Italian restaurants. After months of tasting and tasting, Tony and his wife Dawn selected the final sumptuous candidate sauce. Then the ideal name—Veggie Power—was created and trademarked.

So now, the former celebrity private detective, lifetime pizza lover and recent convert to healthful eating has a new story to tell, starting with, “Have I got a great cauliflower pizza for you!”