Tips from the Team: Serving Up the Suds With Sean Dempsey - PMQ Pizza Magazine 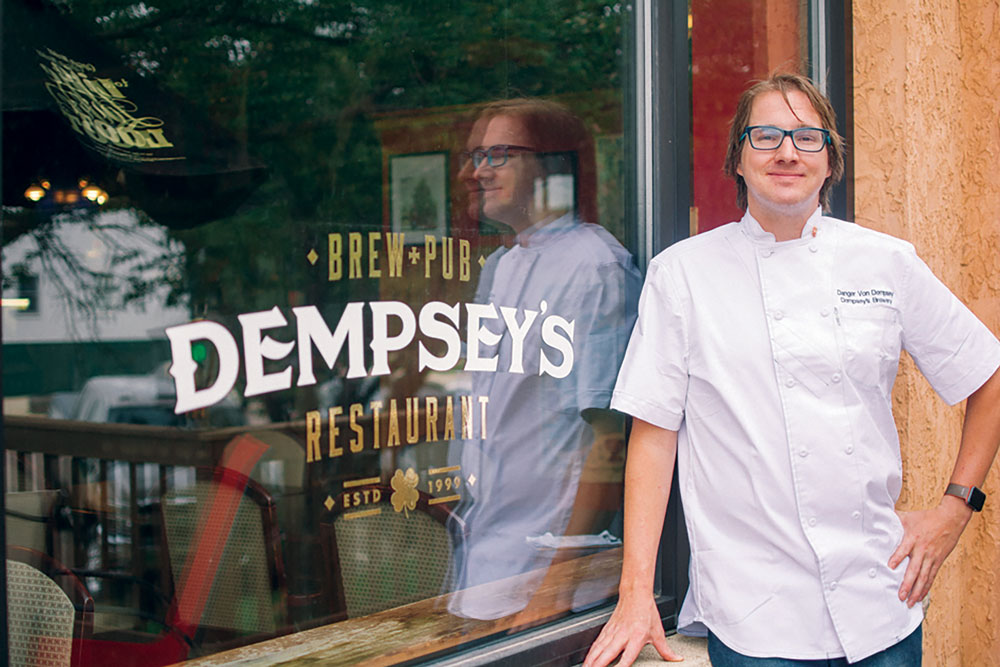 Sean Dempsey has been a member of the U.S. Pizza Team since 2017. He opened Dempsey’s Brew Pub and Restaurant in Watertown, South Dakota, in 1999 and added pizzas to the menu in 2003. But Dempsey got serious about the pizza making craft in 2014. Since then, his restaurant has continued to evolve, pairing housemade craft brews with great signature pizzas. Here, he shares tips for incorporating craft beers into your pizza operation.

PMQ: What are the benefits of pairing beers with your pizzas?

Dempsey: People are usually more open to trying new types of beer if you pair it with the right pizza. In the end, that sells more beer but can also increase your pizza sales. If you go to a nice, fancy restaurant, they typically have wine pairings with certain entrees. At Dempsey’s, we suggest beer pairings with certain pizzas on our menu. That helps take the guesswork out of it for the customer and, again, you can sell more beer. The bottom-line benefit of pairing pies and beers is increased profitability. It’s something you can do that other pizzerias might not offer. It also gets people to stay longer and order more.

PMQ: Do you recommend offering flights of beer with several smaller pizzas, letting the customer mix and match?

PMQ: What are some ways operators can incorporate adult beverages into their menu?

Dempsey: It depends on what you are doing at your place—whether you have a liquor license or are just doing beer and wines. We use tabletop flip menus to talk about our new beer flavors or pairing specials and steer customers toward what we would like them to order. And getting the word out on social media is huge. Show pictures of your food and beers and make “specials of the week” for pairings. Be visual and visible to the public. That will get the word-of-mouth going.

PMQ: So social media is crucial?

Dempsey: Indeed. We use this platform called Untappd that lets us print out heavily designed beer menus while pairing it to an online app that allows the customer to leave reviews on the flavors and scout out their next craft beer adventure.

PMQ: What suggestions would you make to help pizzeria owners develop their own craft beers?

Dempsey: As far as adding beer to your operation in general, the first step I would recommend is getting a draft system. The cost on draft vs. bottles is like night and day. A lot of distributors will help you install a system as well. For developing your own signature beers, there are a couple of options. There are small brew systems you can buy that will make a keg or two at a time. You could go that route, but you can also team up with a local brewery and get them to make a branded label just for your pizzeria. It helps the local breweries out and also helps with the promotion of the beer. They will promote it along with you to get more people in the door to try out your label. This will also create a lasting relationship. The brewery will come to you with ideas, and you can do the same. You can keep the beer menu rotating seasonally without having to add a lot of overhead to your operation.

PMQ: Would you suggest going exclusively with craft beers on your menu or adding domestic brands as well?

Dempsey: I’m a fan of both, actually. The big beer culture going on is craft. Everyone wants to see craft beer, but, on the other hand, Dempsey’s also has seven domestics on tap. You will always have people who just want to come in and order what they know. Others want to experiment with new flavors. A good beginning setup would be three crafts and three domestics on tap. You can always grow either side if needed.

PMQ: Can you offer some tips for pairing beers with pizzas?

Dempsey: We have a Diavolo pizza that we pair with Peroni, because why wouldn’t you? These are Italian flavors, but it’s a spicy pie with layers of sopressata and ghost pepper-infused cheese paired with a light-bodied, mild Italian beer. Always try to complement the flavors in your pizza-beer pairings. If you have a pie with steak, go with something along the lines of a stout, or pair heavier toppings with a great full-bodied beer. A good rule of thumb is, the more complex the beer, the simpler the pie should be. And the more complex the pie, the simpler the beer.

PMQ: If someone’s just starting out, should they stick with beer or go whole-hog with wine and liquor, too?

Dempsey: Beer all the way. Pizza and beer—it’s a match made in heaven. And don’t forget about growler sales. The takeout aspect can add a whole additional revenue stream to your operation.