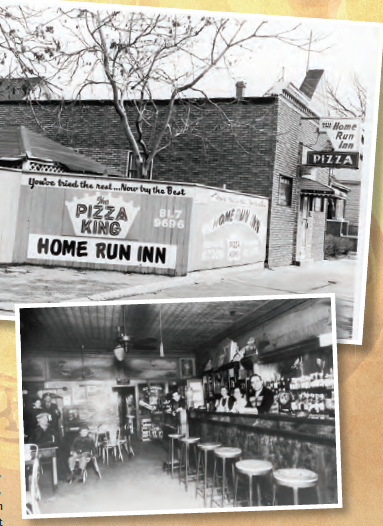 Home Run Inn (homeruninn.com) began in 1923 as a small tavern on Chicago’s South Side. Founded by Mary and Vincent Grittani, the tavern received its name when a baseball from the neighborhood park flew through one of the windows. It wasn’t until son-in-law Nick Perrino returned from an Army stint War II that Nick and Mary began experimenting with pizza recipes. By 1947, they were giving pizza out to bar patrons to attract the drinking crowd, but when people started requesting the pizza specifically, they decided to sell pies, both in-store and to the masses. “In the 1950s, we were one of the first places in the country to do frozen pizzas; my grandfather would par-bake pizzas and sell them to grocery stores for retail,” says Dan Costello, president of the restaurant division and grandson of Nick. Today, that frozen pizza legacy has expanded widely: Home Run frozen pizzas are now available in more than 20 states and are made at the same commissary that prepares all major ingredients (dough, sauce, cheese and sausage) for the restaurants.

However, expansion happened relatively slowly: First, the tavern embraced its pizzeria status and expanded from a 10-seat bar to a 50-seat restaurant; today, the original location seats 600. The second location, in Darien, Illinois, opened in 1987 under current CEO Joe Perrino, son of Nick. But despite having grown to eight locations (with plans to open another four to six stores in the next few years), the company is still a family business—and a hit with families. “We love to hear the pizza stories people tell us, about how couples went on their first date here or kids remember going with their fathers after a baseball game,” says Costello. Accordingly, recent marketing efforts have targeted families, such as the Sunday Fun Day events the stores are holding in October, with free ice cream scoops for kids, face painting and magicians, creating experiences that kids will remember when they grow up—and securing a new generation of Home Run Inn fans.