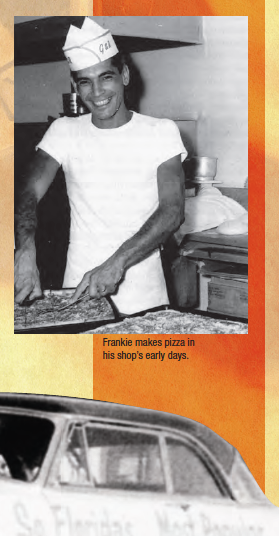 After young Frank Pasquarella and his wife, Noreen, visited Miami on their honeymoon, they fell in love with the city and decided to relocate from Ohio and open a pizzeria. On Valentine’s Day in 1955, Frankie’s Pizza opened in southwest Miami; two years later, it moved to its current spot, a building on Bird Road that formerly housed a small grocery. The location immediately became a success, thanks in part to myriad marketing schemes: placing a free slice on top of every to-go box (to eat on the ride home, Frankie said); creating the “Frankiemobile”; and offering “free pizza nights” for hungry customers.

Though the business has seen great success over the years, it wasn’t always smooth sailing: Frankie suffered a heart attack in 1963 at age 38, and then a massive stroke left him paralyzed in 1980. “The doctors told us that he would never walk or talk again,” remembers Renee, Frankie’s daughter. “He proved them wrong; soon he was back at work to mind the store.”

Lauded as Miami’s oldest pizzeria, Frankie’s Pizza celebrated its 53rd year in business on February 14. Consistently ranked as one of the top pizzerias in the city, Frankie’s also satisfies its faraway fans by offering “half-baked” pizzas all over the United States, thanks to nationwide shipping. Most importantly, the pizzeria, conceived as a family affair, remains so until this day: Though Doreen and Frank passed away in 2002 and 2005, respectively, daughters Roxanne and Renee help run the shop, and many customers have been loyal Frankie’s followers for so long that they, too, have become family. “My family has—and, hopefully, always will be—a good team,” says Renee. “It all just comes very naturally; I guess that comes from doing it our whole lives.”