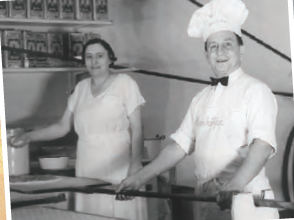 Today, pizza from New Haven, Connecticut, is legendary for its misshapen appearance, thin crust and charred edges—but someone had to start it all, and that someone was Frank Pepe, who in 1925 opened up Frank Pepe Pizzeria Napoletana (pepespizzeria.com). Pepe, an immigrant from Italy’s Amalfi Coast, returned to New Haven in 1920 after World War I with his new bride, Filomena, and eventually opened a bakery, delivering to the neighborhood by cart. “One day, he flattened out some bread dough and put some leftovers on top of it, and they baked it—voila!” says Gary Bimonte, grandson of Frank Pepe and one of the seven grandchildren who inherited the business from Pepe’s daughters. “He would go to the local markets and sell it—‘Apizza, apizza, ten cents a slice!’” At first, Pepe sold two simple styles: the tomato pie (topped with tomatoes, grated cheese, garlic, oregano and olive oil) and another topped with anchovy. In the ’60s, however, the pie forever associated with Pepe was born: the White Clam Pizza. 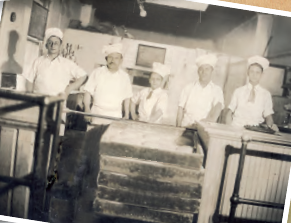 Pepe’s celebrates 85 years in business this year and has expanded to five locations, with another in the works for early 2011. The Original Tomato Pie is still prominently featured on the menu, and many consider the pizzeria the best on Wooster St., known for its historic and highly competitive pizzerias. The secret, according to Bimonte, relies on maintaining the status quo. “We haven’t changed anything from my grandfather’s original recipe,” he says. “Just surviving three generations is very difficult, but we try to keep Frank Pepe’s legacy alive.”