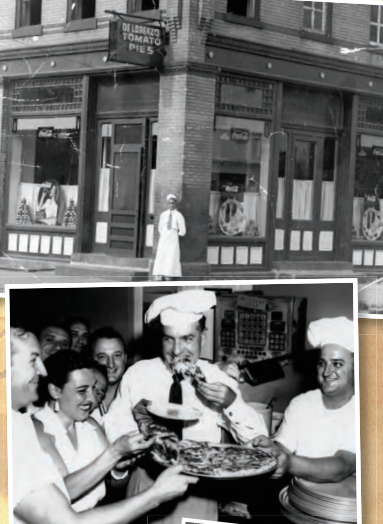 The De Lorenzo’s pizza lineage goes back four generationsto Italian immigrants Pasquale and Maria De Lorenzo, whohelped their four sons (Jimmy, Joe, Johnny and Alexander“Chick”) open a tomato pie restaurant in 1936. Eventually,Chick opened his own pizzeria in Trenton, New Jersey, in1947, which still stands today: De Lorenzo’s Tomato Pies(delorenzostomatopies.com). Chick eventually passed alongthe business to his daughter Eileen and her husband GaryAmico, and their son Sam helped out from childhood—untilSam decided to strike out into the suburbs of Robbinsville,New Jersey, to cater to a new generation of De Lorenzo’s pizza fans.“I was born into the business, starting as a dishwasher when I wasa kid; later, I made pizza five nights a week,” he recalls. “It was a bigrisk to open a new place, and even though everything’s going well, Idon’t take it for granted.”

Of course, the core De Lorenzo’s recipe is at work at both locations,and the Amico family takes pride in the consistent quality ofthe product. The recipe uses California whole tomatoes that are handcrushed and blended with other tomatoes to make the most importantcomponent of the tomato pies. The thin, crispy crust has followedthe same recipe for nearly 65 years, and the mozzarella (trueto tomato pie fashion) goes onbefore the sauce. This recipe hasled to dozens of awards for thepizzeria over the years, plus a loyal following that still crowdsthe original location.

Amico credits the pizzeria’s longevity to hard work and thewillingness to keep learning, adjusting and adapting. “In atrue family-run business, you know that people care aboutwhat they’re doing, that the people involved have passionand really like what they do,” he says. “After 26 years in thebusiness, I’m still learning every day. Once you think youknow everything, that’s when things go bad.”