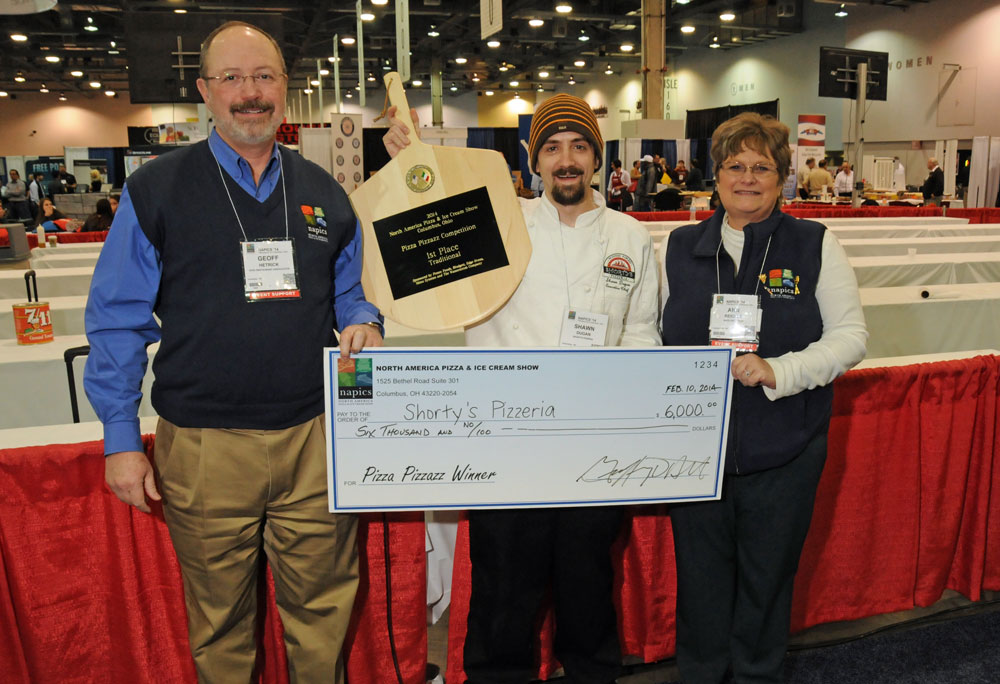 Shawn Dugan, executive chef at Shorty’s Pizzeria in Parkersburg, W.Va., claimed the $6,000 first prize in the Traditional category of the 2014 Pizza Pizzazz competition on Feb. 10. His pizza’s claim to the “Best of the Midwest” title marked Dugan’s first win in only his second try at the 16th annual contest. Pizza Pizzazz is held in conjunction with the annual North America Pizza & Ice Cream Show (NAPICS), Feb. 9-10 at the Columbus Convention Center.

Baking the Manzo Primo pizza, Dugan became one of six finalists chosen from a field of 63 competing pizza makers from multiple independent and chain operations in the Eastern U.S. A graduate of the culinary program at Hocking College in Nelsonville, Ohio, Dugan got hooked on authentic pizza during an internship in Italy five years ago.

“The pizza in Italy ruined me on what we had back here,” said Dugan, who operates Shorty’s with his father, Brien Dugan, who is a hotel and restaurant veteran. “When I got back to America (in 2010) and knew we had nothing here like they did there, I started talking to my father about opening up our own restaurant.”

“We upgraded the cheese we were using to Grande, and we’re now using bacon that’s smoked over corn cobs,” he said. “I’d never heard of it, but then we tried it and thought, ‘That’s by far the best I’ve ever had.’ I really think those changes pushed us over the top.”

While Dugan said his prize money will be invested into Shorty’s, he was planning a small celebration after the contest.

“I expect we’ll have some cocktails just as soon as I finish here,” he said.

Jason Hague of Bada Bing Pizzeria in Springfield, Ohio, grabbed second place and a $1,000 prize for his Goombah pizza. Cynthia Hamlin of Capone’s Pizza in Parma, Ohio, took third and earned $500 for her Capone Classic. Hamlin, a past Pizza Pizzazz finalist, also finished second in the Gourmet category contest on Feb. 9, boosting her two-day take to $1,500.

In earning the right to call their pizza, “Best of the Midwest,” winning pizzerias typically reap a sales bonanza as fans flock to their restaurants to taste victors’ pies.

“It’s a real source of pride for these pizza makers to achieve that distinction,” said NAPICS chairwoman Ann Reichle, owner of two Angelina’s Pizza shops near Cleveland. Reichle also is a

past Pizza Pizzazz winner. “It also means a lot to their businesses because of the long-term sales impact. We have pizza makers tell us about people driving two hours to try their winning pie. That says a lot about the excitement surrounding this contest.”