This tiny Australian pizzeria stood up to a major national chain - and came out on top! - PMQ Pizza Magazine 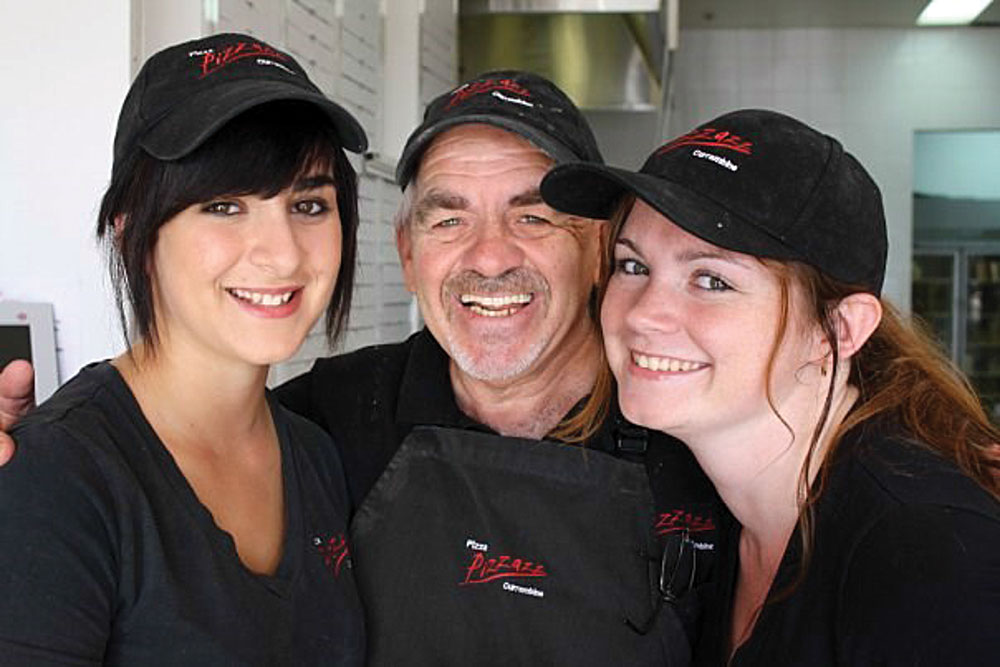 When a major national pizza chain opened a store down the road from David Waterman’s tiny pizza shop in Currambine, a beachside suburb of Perth, Western Australia, things looked pretty bleak. But some advice from PMQ’s Think Tank helped Waterman’s 28-seat Pizza Pizzazz (realpizzas.com) go head-to-head with the chain and come out on top. And, although the battle took place four years ago, it’s as relevant today as the biblical tale of David and Goliath—with a modern-day guy named David to boot.

Waterman never set out to conquer the pizza world; it was a second career for him. He bought his little shop after getting downsized from a sales job in the grocery business. “Not knowing much in the beginning, I paid quite the fool’s tax,” he recalls. “I learned after I purchased the place that the previous owners had doctored the figures up a bit—despite our best due diligence—and there was quite a bit of shoddy equipment that had to be replaced early on. I ended up spending an extra $60,000 right away on revamping the shop, fixing the prep bench, refrigerator motors and such. I ended up adding a second oven as sales increased later on.”

Once he’d made the upgrades, Waterman went to work on the business itself. The store offers strictly nighttime service, opening at 5 p.m. every day and closing at 9 p.m. Sunday through Thursday and at 10 p.m. Friday and Saturday. His first big challenge was to persuade customers to opt for takeaway and dine-in instead of the more problematic delivery option. “The delivery side was really losing business and not as profitable,” he says. “With the increase in petrol at the time, we couldn’t get or keep drivers. Delivery times were long, and we needed to change that. I really pushed the fact that customers could pick up an order in about 15 to 20 minutes or wait an hour to an hour and a half for delivery. It worked—about 70% of my business is takeaway now, about 25% is delivery, and the rest is dine-in.”

“We ran a leaflet in the local paper and offered a free small pizza to the first 150 people on the day after [national chain] Eagle Boys opened, with an offer to upgrade to a large pizza for just $5 more. On the Tuesday after they opened, we had 50 to 60 people already lined up.”
— David Waterman, Pizza Pizzazz

Switching his customer base from delivery to takeaway was a positive move, but more obstacles loomed for Waterman. As Pizza Pizzazz began to take off, he got word that Eagle Boys, one of Australia’s largest pizza chains, would soon open a store about 100 meters down the road. “I saw that they were advertising for employees in the papers and knew it would be a couple of weeks before they would open, so I developed a plan to dampen their grand opening,” Waterman says.

As Eagle Boys’ big day approached, Waterman set his plan into motion. “We ran a leaflet in the local paper and offered a free small pizza to the first 150 people on the day after Eagle Boys opened, with an offer to upgrade to a large pizza for just $5 more,” he says. “On the Tuesday after they opened, we had a line of 50 to 60 people already lined up.”

To maximize the promotion’s impact, Waterman set up barricade rails in front of the shop and let in only five or six customers at a time. The delay created an even longer line outside the shop, drawing the attention of passersby. He also had customers fill out a contact information sheet to get the free pizza, building his database for future marketing outreach.

“It went over so well that, two weeks later, I did it again, but I did it a little differently,” he continues. “I made the same offer of a free pizza in a direct mail piece and had the postman drop it in the first 200 boxes he came to in the vicinity of Eagle Boys. It was for a free large pizza this time—any pizza except our gourmet line. It read, ‘If you are a customer, this is a thank-you. If not, give us a try.’ It worked so well at stalling their grand opening and building my customer database that I repeated the same strategy every two weeks—for a total of four more times—in surrounding suburbs. We had confidence in our product, knowing that if new customers tried us, they would come back.”

Thanks to the Tank

Waterman got the general idea for this strategy by reading PMQ’s online forum, the Think Tank, then added his own ideas, such as the barricades and the contact sheet. “Prior to that, I was probably doing just $9,000 per week, but after that, my sales jumped to $11,000 per week,” he says. “Sales have increased progressively since then, to around $14,000 per week. That was about four years ago. From what I heard, Eagle Boys at that location never got up to their projected numbers until about a year ago.”

Waterman continues to try new promotional strategies. When a local radio station held a contest asking listeners to call in and name their favorite pizza, Waterman created box toppers to encourage his customers to vote for Pizza Pizzazz. “We had a lot of people hear about us who had never ordered before, and we got voted best pizza,” he says. “I had a sign added to our window that said ‘Voted Best Pizza in Perth.’ It helped take our sales to the next level. No matter what you win, make a big deal out of it. Maybe I should take it down, but it still works,” he laughs.

Waterman says he’s no marketing guru, but he’s always open to new ideas. “Read all you can and learn from others,” he advises. “I am in the Think Tank on PMQ.com every day, learning, and a lot of the info there works. The days of Mom and Pop leaning on the counter are over. You need to have a clean shop and market yourself. Uniform your staff and present a professional appearance. You have to offer more than just pizza, because customers want more than just pizza, and you have to be different with it and your other menu items. And, most of all, you must have a website presence. Customers expect it.”

Tom Boyles is a PMQ account executive and editor of PMQ Australia.