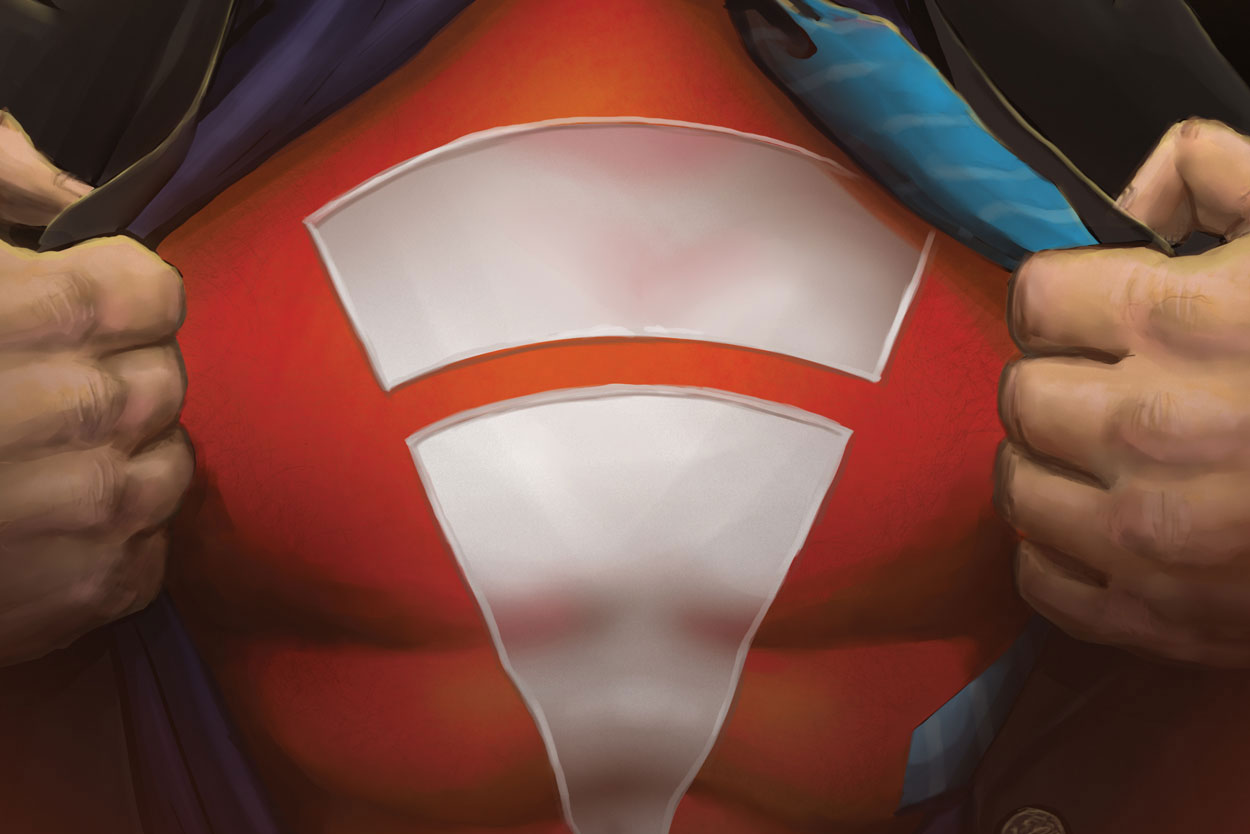 As a kid, I read a lot of comic books—too many, as far as my father was concerned. I bought them from the local Jr. Food Mart, traded them with my buddies and even drew and wrote my own comics with supposedly “original” characters who were, in fact, blatant ripoffs of the “real” ones. Never mind that I couldn’t draw; I was so impressed with my own work that I spent several weekends going door-to-door in my neighborhood, offering to sell my comics for nickels and dimes, anything I could get. To my chagrin, it turned out there wasn’t a big demand for horribly drawn comic books featuring super-powered characters with names like Doctor Danger and Lion Man. Imagine that.

I never did learn to draw, but my love for great comic book art and superhero adventures lives on. Fortunately, when we hit upon the idea of putting a pizza-themed spin on the iconic Superman image—Clark Kent peeling off his shirt and tie to reveal the famous “S” on his costume—for this month’s Pizza Power Report cover, we didn’t have to rely on my unskilled hand to create the character. That happens to be a specialty of PMQ designer Eric Summers, one of the most talented artists I’ve ever known. Eric came through with an outstanding cover image that reflects the modern comic art style—a little dark and gritty, but with the square-jawed nobility of the all-American hero. Eric then went on to flesh out the character for the Pizza Power Report’s opening spread—and a new superhero, Justice Slice, was born. (Pizza Man, for the record, was already taken!)

Of course, every superhero needs a bad guy to battle, but we haven’t yet come up with an arch-nemesis for Justice Slice. Who would that be? Captain Soggy Crust? The Evil Anchovy? (Yes, those are terrible names. Clearly, there was a reason why no one wanted to buy my comic books.) Your suggestions are welcome. In the meantime, check out Eric’s original Justice Slice artwork on page 36, then delve into this year’s Pizza Power Report for a detailed examination of the past year’s industry trends and the opportunities and issues that we’ll face in 2015. The coming year brings its share of challenges, but this is still a great time to be in the pizza business. Here at PMQ, we’re no superheroes, but we plan to take full advantage of every new opportunity afforded by technology so that we can better serve and inform our readers. We’re committed to helping guide you through, around and above any obstacles you may encounter. As another year winds down, we invite you to join us in our quest to promote truth, justice and the American pie in 2015