For veteran pizzaiolo and U.S. Pizza Team coach Jamie Culliton, the 2014 World Pizza Championship was more than just another pizza competition. It was a chance to make a long-held dream come true.

Facing off against some of the best dough spinning “pizzathletes” on the planet in the Freestyle Acrobatics category, Culliton strode onto the stage as a bevy of beauties tossed flowers at his feet. With deft hand motions and practiced rhythm, he eased into a finely honed routine, set to Justin Timberlake’s “Suit and Tie,” that revved up the crowd and electrified the room. And when it was all over, Culliton walked offstage as the No. 2 dough spinner in the world.

“I had dreamed of that day for years,” Culliton says, recalling the moment his second-place finish was announced. “I was so proud to wear the American flag and represent my country in front of the entire pizza world.”

Culliton’s performance was a major highlight of this year’s trip to Parma, Italy, for the U.S. Pizza Team (USPT), which captured first prize in the Team Acrobatics category at the 2011 World Pizza Championship in Salsomaggiore, Italy. Culliton’s fellow USPT members, meanwhile, also shone in acrobatic and culinary contests throughout the three-day event.

“This was one of the finest teams we’ve ever brought to Italy,” says Steve Green, publisher of PMQ Pizza Magazine and creator of the U.S. Pizza Team in 2000. “They held their own against the very best in the world and represented their country admirably. We couldn’t have been prouder of them.”

Culliton says he had practiced his “Suit and Tie” routine for six months, winning with it first in the USPT Trials held at the North America Pizza and Ice Cream Show in Columbus, Ohio, back in February. “Since that win, I edited and reworked it until I had it just right,” he says. “The women throwing flower petals was added in at the last minute. They were very happy to help me, and I should take this opportunity to thank them. I feel like that really put the routine over the top for entertainment value.”

He started out a tad cautiously, Culliton recalls, “but once I hit a few of my combos, I really started to feel it. There was a point where I knew the dough felt great, and I was very comfortable. I could hear the crowd cheering and applauding, especially the rest of the team. Their support was a huge confidence booster and motivator. The key was to keep the energy level high. I think we accomplished that!”

Meanwhile, Culliton’s friend and teammate Dave Sommers, owner of Mad Mushroom Pizza (madmushroom.com) in West Lafayette, Indiana, powered through his own routine to finish fifth in the world (out of 24 competitors) in the Largest Dough Stretch competition. Sommers also partnered with Michael Stevens, owner of Palo Mesa Pizza (palomesapizza.com) in Arroyo Grande, California, in the Pizza For Two category and finished 16th out of 43 competitors.

Sommers and Stevens weren’t the only USPT members to make an impact in the culinary contests in Parma. Rick and Jane Mines, co-owners of Nima’s Pizza (nimaspizza.com) in Gassville, Arkansas, placed 17th in the Pizza For Two category. Jane Mines also finished 19th out of 50 in the Pizza On the Peel category, while Heather Zook, owner of Sinfully Gluten-Free (sinfullygf.com) in Centerville, Ohio, placed 21st out of 33 in the Gluten-Free competition.

Stevens was the top-ranking American in the Classic Pizza category, finishing 67th out of 349 contestants with a pizza featuring anchovies, tomatoes, basil, buffalo mozzarella, salami and aged balsamic vinegar.

All told, more than 30 countries sent squads to Parma, and more than 600 pizza makers took part in various categories of competition. Top prizes in the Classic Pizza contest went to:

The competition was Leah Scurto’s first experience on the world stage. “It was amazing, but it did have its challenges,” she says. “Having never been there, I had no idea if we would find the ingredients we wanted in the markets. We came with a plan A and a plan B, and we ended up using plan C.”

Scurto admits she wasn’t satisfied with her scores, but she hopes for another shot. “I would love to come back, especially now that I know the drill,” she says. “All of the USPT members were fantastic. It really felt like a team as everyone came together to help each other out and covered each other’s backs. The competition itself was a bit intimidating, with all the cameras everywhere, but that also made it more exciting. I see this year as a learning experience, and I know what to do differently in the future and exactly what to expect.”

Culliton has competed in the Italy event before, but this year’s contest was a once-in-a-lifetime triumph for him. “I finally fulfilled a goal I’ve been working toward for 10 years,” he says. “It has given me a great sense of pride that all my hard work finally paid off.

“I love being with the U.S. Pizza Team and traveling through Italy,” Culliton adds. “I’m so lucky to have the opportunity to meet so many great people and share so many awesome experiences with some of the best pizza makers in the world.”

4 Ways to Create a Pizza Box That Rocks! 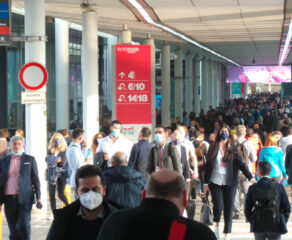 COVID-19 and the Great Italy Reset