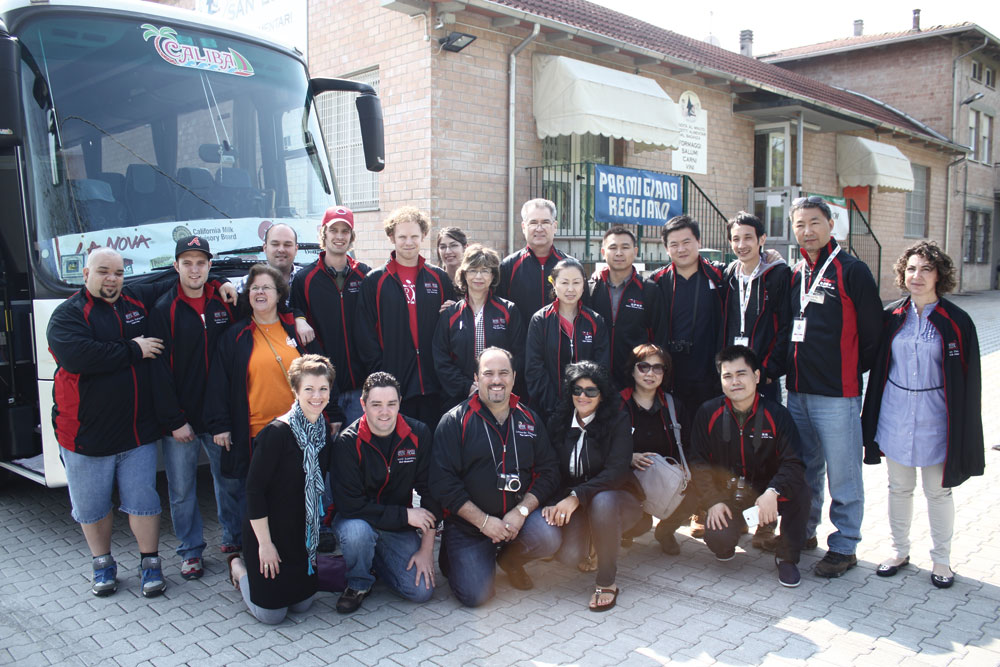 Leonardo Giordano already had a lot on his mind when a stranger in stylish threads stepped up to his prep table at the recent World Championship of Pizza in Parma, Italy. As part of the Pizza for Two competition, Giordano, owner of Mona Lisa Pizzeria &

Ristorante in Staten Island, New York, was busily preparing the Delizia al Samone, a gourmet pizza, with his contest partner and fellow U.S. Pizza Team (USPT) member Greg Spaulding, manager of Puccini’s Smiling Teeth (puccinissmilingteeth.com) in Lexington, Kentucky, when he noticed the handsome, nattily dressed man hovering nearby. “I looked up for a second, and there was this gentleman staring at me,” Giordano recalls. “He said, ‘Wow, that looks amazing. I’m impressed. Make sure I get a piece.’”

The stranger questioned Giordano for several minutes about the pie before moving on. Only later did Giordano learn that the man who’d shown such keen interest in his pizza was an honest-to-goodness, real-life European prince—Emanuele Filiberto, the only male-line grandson of Umberto II, the last king of Italy, and undisputed heir to the throne (if the throne still existed).

After the contest judging was done, Giordano wasted no time in making sure the prince got his desired slice of pie—made with smoked salmon, caviar, stracchino cheese and chive onions, topped with a drizzle of honey. “Since my roots are in Italy, it was my honor to meet a man that I had only heard about before,” he says. “My nerves were shaky while I answered all of his questions, which had taken me totally off-guard. With all that was going on at the venue, this man, the Italian prince, took an interest in my pizza. It was definitely the experience of a lifetime. That was the best prize that I could take home. And my family and friends in Italy were going crazy.”

You never know whom you might meet —and make pizza for—as a member of the USPT. The World Championship of Pizza, held annually in Italy, brings together hundreds of elite pizza makers from across the globe to compete in culinary, acrobatic and dough stretching categories. The USPT represents the United States at the event every year and won the Team Acrobatics competition in 2011. Team members qualify for the trip by competing in regional contests around the United States throughout the preceding year.

In a very real sense, the USPT is a “team of rivals.” Pizza makers and pizzathletes vie against each other in trial competitions throughout the year, jockeying for a limited number of spots on the squad. But once the final USPT roster is settled and the team heads to Italy, members work together as compatriots, rooting for each other, providing offstage assistance and swapping tips for success.

Bradley Corbin, co-owner of Sloopy’s Sports Café (sloopyspizza.com) in Lakeside, Ohio, earned his USPT spot by winning the 2012 American Pizza Championship in Orlando. No stranger to competitive pizza making, he has also won in the Gourmet category of the Pizza Pizzazz event in Columbus, Ohio, for the past two years, an unprecedented feat in the contest’s 15-year history. He and his Sloopy’s partner, Matt Mangan (winner of the 2012 Pizza Pizzazz’s Traditional category), made their first trip to the World Championship of Pizza this year, and the event lived up to their expectations. “Being on the grand stage of pizza, presenting our product and representing America, PMQ and the USPT—it was an awe-inspiring moment,” Corbin says. “Italy is a gorgeous country. We were able to take some small side trips and view some beautiful parts of the country.”

Mangan says the competition was “nerve-racking, especially adjusting to the different types of ovens in Italy, and exciting at the same time. We love competing and proving that we produce top-quality pies.”

Bradley Johnson, a manager at Chattanooga, Tennessee’s Mellow Mushroom (mellowmushroom.com), finished eighth in the world in the Freestyle Acrobatics category. Introduced by the judges as “King Bradley,” Johnson dazzled the audience with his show-stopping Blues Brothers routine, complete with white shirt, black tie and dark sunglasses. “One of the highlights for me was competing in front of that large crowd and having them cheer louder for me than for any other competitor,” Johnson says. “I’ll remember that forever.”

The USPT’s other top performers included Wilhelm Rodriguez, owner of Papa’s Pizza in Cabo Rojo, Puerto Rico, and Patrick Maggi, owner of Pasquale’s Deli (pasqualesdeli.com) in Damascus, Maryland, who took seventh place in the Pizza for Two category, as well as Dave Sommers of Mad Mushroom Pizza (madmushroom.com) in West Lafayette, Indiana, and Frank Baird of Franco’s Pizza Plus in Chardon, Ohio.

After years of making pizzas for American consumers, Mangan thinks the trick to winning the culinary competition in Parma is to target European taste buds. “It was a very different style than we are used to,” he says. “It seems that, to compete against the Italians or the French, you should somewhat adapt yourself to their style of pizza.”

Corbin agrees, adding, “You have to cook for the country you’re in. The pizzas we created were really outside the norm.” One unusual recipe was the Hibachi Pizza, made with Japanese white sauce, chicken, shrimp, fried rice, sesame seeds, oyster/soy sauce and various sautéed vegetables. Corbin and Mangan also created Paige’s Delight, featuring chicken, applewood bacon, onion, a sweet glaze made from strawberry puree and balsamic reduction, fresh strawberries, cilantro and chili sauce.

The team stayed at the Hotel Palace Maria Luigia in Parma, where the management went to great lengths to accommodate its needs, says Brian Hernandez, PMQ’s operations director and organizer of the trip. “Our guys had to do a lot of advance work to prepare dough and sauces before each day’s competition started,” Hernandez explains. “The hotel bent over backward to help us, and the restaurant within the hotel, Ristorante Maxim’s, opened its kitchen to us. We were able to use their stoves and ovens and accomplish a lot of prep work. We were very grateful to Hotel Palace Maria Luigia and to Ristorante Maxim’s for their generosity and helpfulness.”

Meanwhile, Giordano notes that a strong team spirit prevailed throughout the competition. “I was very impressed by how everyone worked together as a team, not as competitors, even though we were all competing individually,” he says. “We all helped each other out, whether someone needed ingredients or a translator. It amazed me. I got to work with some of the finest—and nicest—people as part of the U.S. Pizza Team.”

Meanwhile, Johnson enjoyed meeting dough spinning competitors from other nations. “Throughout the three days, we were able to mingle and interact with the world’s top pizzaioli, and all of them were friendly and willing to trade tricks with one another, which was great,” he reports. “I was able to see the different styles and combinations of tricks that people use, and it will help me come up with a new arsenal of my own tricks. All of this gives you the opportunity to figure out ways to get better and become a stronger competitor.”

Even better, Johnson adds, the camaraderie between USPT members ensured that “there was never a dull moment.” He adds, “My fellow teammates could not have been any better. They were all so supportive, not only of me but of everyone else. It really was like one big happy family.”