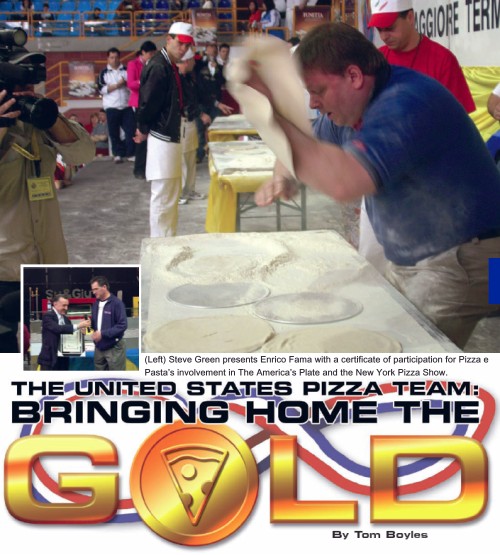 The most exciting trip to I have made with the U.S. Pizza Team was capped off when yet another gold medal was added to the trophy case. Not only was this trip the most fun, it was the largest group to travel to Salsomaggiore to support the team.

Thirty-three Americans cheered as an American took the top position on the stage and received the gold medal from Miss Italy. There were some team members who didn't even know they were going until just two weeks prior to leaving when they won their culinary positions at the North American Pizza and Ice Cream Show. For many, the trip started back in November when they earned their position at PMQ's New York Pizza Show. 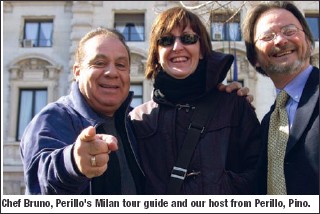 Brian Edler (Domino's franchise owner, Findlay, Ohio), Juan Hermosillo (La Cucina de Isabel, Costa Mesa, California) and Sean Brauser (Romeo's Pizza, Medina, Ohio) were some of the 2005 team members who started planning back in November. Sean earned his position in the American Pizza Championship at the New York Pizza Show by defeating four other pizza chefs. Not only did this earn his spot on the 2005 team, he also advanced to the America's Plate competition, in which the best pizza chefs from the U.S., Italy, Australia and France battled it out to see who was best. Australia's Andy Parisi won the America's Plate.

Brian Edler's fast hands won not only the fastest pizza maker position in the U.S. Pizza Team tryouts, but also won the largest dough stretch competition in New York. This was the third year Brian has earned a spot on the team. 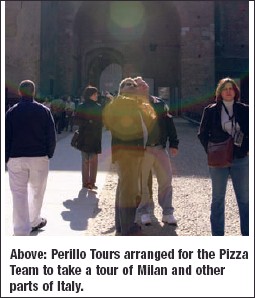 Juan Hermosillo, who prior to the U.S. Pizza Team tryouts in New York was virtually unknown, stunned the crowd by winning the individual acrobatic dough tossing competition in New York against the previously undefeated Tony Gemignani who had not competed in this category in over five years. Juan's only other attempt at acrobatic dough tossing came early last year when he tried out for the 2004 team and came in second to George Giove.

The U.S. Pizza Team's culinary squad consisted of Tim Duffey (DeFelice Brothers Pizza, St. Clairsville, Ohio) who won the traditional category in the Pizza Pizzazz competition at NAPICS and Jason Samosky (Samosky's Homestyle Pizzeria, Valley City, Ohio) who won the gourmet category in the Pizza Pizzazz competition. Tim and Jason hardly had time to let the victory at NAPICS sink in before packing their bags for Italy. 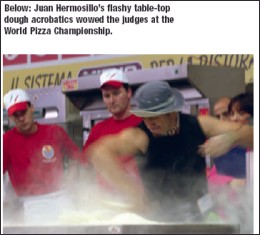 This year the U.S. Pizza Team and supporters traveled in style while Perillo Tours handled all of the trip's details. The team arrived in Milan on Saturday (March 12th),  boarded a tour bus and were carried to the posh Doria Grand Hotel where many rested from their flights, and some ventured out into the streets to shop at street markets and clothing stores. Later that night, everyone boarded the bus and listened to Pino's (our tour guide) descriptions of the area on the way to a local restaurant. There, everyone got to know each other over a three-course meal, and then it was back to the hotel. 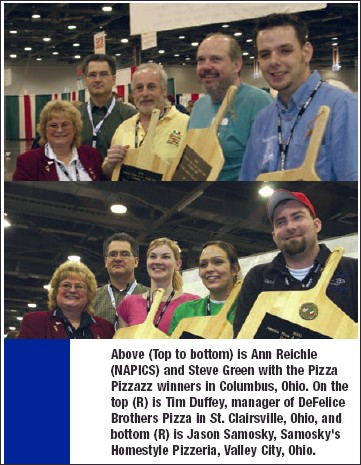 On the second day, Perillo Tours took everyone on a tour of Milan and stopped at one of the castles and the Duomo where we were free to roam for three hours of sightseeing and shopping. After the tour of Milan, we were off to Salsomaggiore and the World Pizza Championship. 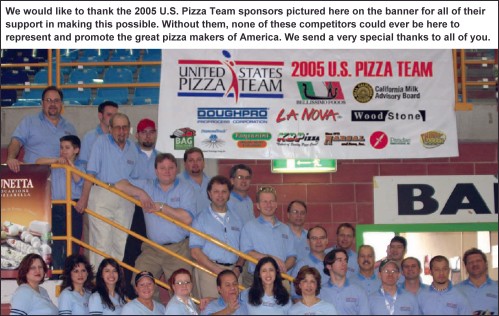 Chef Bruno and Dino Ciccone, who both did a wonderful job of interpreting and providing support to the nervous competitors, coached the culinary team this year. You would think this would be "just another day at work" for these guys. Combined, they have made hundreds of thousands of pizzas, but something about cooking pizza in the World Pizza Championship creates butterflies in even the most seasoned pizzaiolo. Once the sauce and dough started to be assembled, everyone settled in to the task at hand and produced some delicious pizzas. All of the culinary members competed on Monday (March 14th). 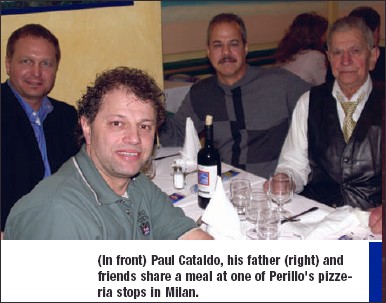 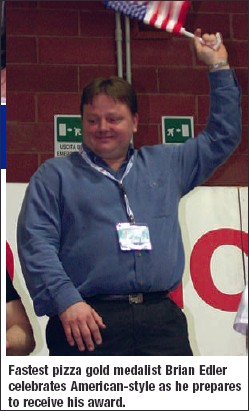 On Tuesday, the entire team had the day off. The acrobatic squad seized the day to practice spinning, stretching and tossing dough, but not the rest of the group. Perillo Tours arranged a day excursion to Florence. I am told it was beautiful, and based on the ear-to-ear grins everyone had as they returned, it must have been nice. Myself, I stayed behind helping with details, getting dough made for the acrobats and shuttling the crew to and fro for supplies. I can't complain though – I seized the opportunity to go down to my favorite pizzeria in the whole world (Pizzeria de Renato) and snag a few pizzas for myself. On my first run, I bought two and went to my room before anyone spotted me with the boxes. I woke up an hour and a half later with one empty pizza box on the floor and one box with half a pizza lying in it on my stomach. By the end of the day, I had made another run to de Renato – this time for the pizza with proscuitto – mmm!

The third day was the acrobatic competition. First on the floor was Brian Edler for the largest dough stretch. Last year, Brian was plagued with dough problems that as he said, "left the dough looking like Swiss cheese." This year he didn't have that problem. When finished, he knew the stretch was good, but didn't know how he stood against the rest of the pack. Immediately after he finished his stretch, the announcer called his name for the fastest pizza making competition. With sweat still trickling down his cheek, he stepped up to the table. I barely had time to get the camera set when he was finished. 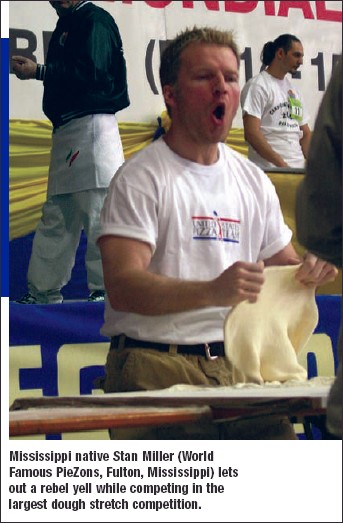 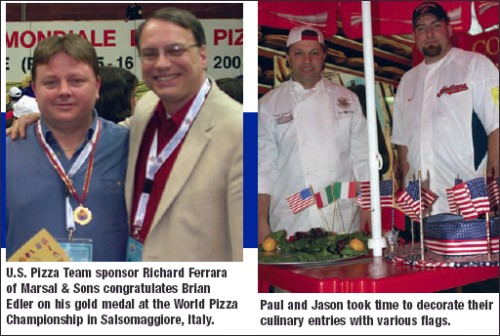 Just after that, Stan Millar (World Famous PieZons, Fulton, Mississippi), who had paid for his trip to Italy, stepped up to the mark for his run at the largest dough stretch. He really got some attention as he let out a roaring rebel yell as he began to work the dough. "I was so nervous, I just had to do it to calm down," Stan said. "After I yelled, I felt better and started to go to work on the dough." Being from Mississippi myself, I kind of enjoyed it and started cheering him on along with the rest of his newfound fans. 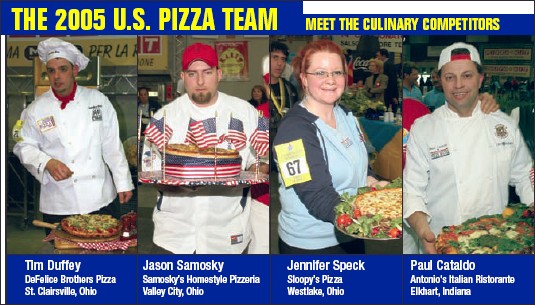 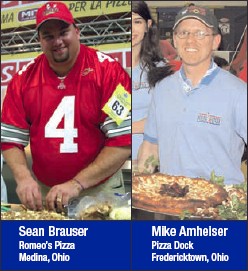 Wednesday night was the awards ceremony. Once again, when Miss Italy entered the room, every Italian male within 100 yards surrounded her. Before long, the crowd settled down and the awards were announced.

Tim Duffey was stunned when his name was called as the winner of the best pizza in North America. "I am in disbelief," he said as he returned to the table. "I didn't even know I was coming to Italy until two weeks ago."

The awards shifted to the acrobatic categories. We all waited as the winner for the fastest pizza maker was announced. It seems that Brian has now earned a nickname with the Italians because just prior to the announcer saying his name, we could make out a term we had been hearing all day – "speedy." Not only did Brian win the gold medal, he set a new record of 37 seconds for making five pizzas.

To date, the U.S. Pizza Team has won five medals in Salsomaggiore; three gold medals (dough stretching, fastest pizza making and individual acrobatic dough tossing); a silver medal (Pizza Classica, the most prestigious culinary award) and a bronze medal (largest dough stretching) at the WPC. You could be the next medalist. Culinary and acrobatic positions are available at the New York Pizza Show in November and culinary positions Pizza Pizzazz in Columbus, Ohio, in February. Other spots can be won at various competitions throughout the country over the next year, so stay tuned to www.pmq.com, www.uspizzateam.com and PMQ for your chance to be on the team. If you don't win a spot on the team, you can still travel to Italy with PMQ. For details on going next year, contact Caroline Felker at 662-234-5481 ext 125 or email caroline@pmq.com.