Eagle Boy's Pizza has created quite a buzz in the land down under… and in other parts of the world, too.

Recently, Eagle Boy's launched a two-minute guarantee, which was the result of four years of product and equipment engineering and many headaches. It's called the Eagle Express and it may be the catalyst that will give pizza an advantage in the war with the burger guys. About five years ago, Eagle Boy's founder and CEO Tom Potter came back from a trip to the United States and Italy with an idea.

Pizza has traditionally been considered fast food even though it's anything but fast. You cannot walk into a pizzeria, order a #2 value deal and be out the door in a couple of minutes. 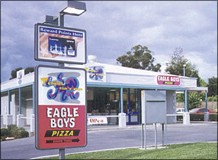 The employees don't pull the order from a heat lamp holding area or microwave it to warm it up again before it goes in the bag. A pie with pepperoni, sausage and bacon isn't assembled from pre-cooked toppings and shoved straight in the box and sent out, or at least we hope it's not. In most cases it's cooked to order or sold by the slice. But still, pizza is considered fast food, just like the burger.

Pizzerias don't compete with the burger guys' product. How many different ways can you make a burger compared to the flavor combinations of pizza? Even if you weren't a pizza guy, which would you prefer, a pizza or a burger? What pizza guys are competing with is the clock. Burgers are fast, convenient and you can instantly gratify your hunger on a whim. You're driving down the road coming home or trying to get from point A to point B and want to stop and grab a quick bite or something to take home. You pull off the main road and what do you look for? In most cases, the shortest drive-thru line or emptiest parking lot. You want to get home or to point B. You really don't consider pizza. Why? Because this meal wasn't planned and you don't have 20 or 30 minutes to wait for a pizza to be cooked.

While Tom was in the States and Europe, he noticed that people who wanted fast food wanted it fast, and thus, the idea was formed. While he still believes pizza should never be considered fast food, he also believes that if pizza is going to compete right along side the burger, it should be a fair fight. For two years they worked on the technology and once it was in place they worked for two years matching the product to the technology. And now Eagle Boy's is testing their new weapon in about 30 to 35 percent of their pizzerias in Australia. Here's the deal.

How They Did It

You walk in, order a pizza and get a freshly cooked pizza to go in two minutes or it's free. Not a pizza that "finished" cooking 20 minutes ago, but a fresh pie. Well Tom, how do you do it? Magic Pizzas? Well, maybe not magic pizzas, more like some James Bond gadgetry. I tried and tried to get him to give up the secrets, but Tom held on to most of them as if they were an Australian football and this was the Big Game. I suppose it is. Eventually I pieced together how they do it. 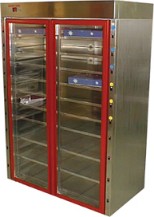 Borrowing from principals used in baking bread, they found a method to overcome the way pizza deteriorates when held in a holding cabinet or under a heating lamp. When bread comes out of the oven, it is placed on a shelf and continues to cook internally for 20 to 30 minutes. When a pizza comes out of the oven it continues to cook internally for only about two minutes. What they did was develop a secondary cooking unit that slows down the last 10 percent of a pizza's cooktime so that it takes 30 minutes to cook to 100 percent done. Even straight out of the oven at only 90 percent done a pizza is edible and probably couldn't be distinguished from one cooked to 98 percent done. So there was the first stage.

The second stage of development was determining what product could be cooked in this manner. This also took two years of development. "We had to match the product with the hardware at the store level," Tom said. "We only offer large pizzas in deep pans for the two minute guarantee and only offer whole pies with limited toppings. We can do others though. Operationally, we also found that we needed one person to place the pies in the Eagle Express unit and monitor and sell the product. Even though our research shows pies stored in the Eagle Express have great quality even after 40 minutes, we still remove pizzas once they have been in there 30 minutes. The last stage of development, and the one we are at now, deals with marketing. Not only is it necessary to tell customers about the product, we have to prove the product. We said, 'It's two minutes or it's free.' There's the challenge."

As far as the unit, it is a combination of an oven and a holding cabinet, but more of an oven because it does cook. The shelves inside the unit can be either glass or stainless steel. It's not a single unit that does all of the cooking, so a regular oven is needed with this equipment. Like I said, I tried and tried to find out who the electronics manufacturer was that made the hardware, but Tom was unrelenting.

"Right now we have branding rights to Eagle Express," Tom said. "We expect that someone will get their hands on one before too long and will replicate the electronics, but it will still take a couple of years to match the product to the technology."

As Tom spoke, I began to think, "If this thing does what he says it will do, it could revolutionize the pizza industry. Pizza could compete on a level playing field with the burger. Rather than pizzerias fighting with each other for customers, why not offer this technology to the industry and go after the burger?"

Tom said Eagle Boy's calculates this new offer will capture about 10 percent of the competition and 1 percent to 2 percent of the burger guys' customers. He said that at this time the best store is doing about 40 percent of its sales as express sales and it normally takes more than a year to double sales. When I asked how much these contraptions cost he stonewalled me, but did say that if a store did 5 percent of its sales as express sales, the equipment should pay for itself within three years.

"It could revolutionize the industry," Tom said. "We give it a 9 out of 10. Eventually we will offer it in all of our stores and may release what we know."

Eagle Boy's started in 1987 and at that time delivery was just starting to take off in Australia. In the beginning, a vast majority of their stores (about 60) were in rural areas. Now Eagle Boy's has over 140 locations that specialize in carry out and delivery. They are a mainstream operation with a high level of customer loyalty. Eagle Boy's spends about $4.5 million dollars a year on advertising, which is focused primarily on flyers and TV. Eagle Boy's has been busy opening several drive-thrus, which is perfectly suited to the two-minute express pizzas. Many of the units offering express pizzas have doubled sales in the last 12 months.

Looking towards the future, Eagle Boy's is currently looking at opportunities in Malaysia, Hong Kong, China and Singapore and expect to open a location in Malaysia in the next 12 months. Most of their expansion will occur in Australia.

When asked what he attributes most of Eagle Boy's success to, Tom said that most has come from the fact that they are willing to take risks and supply value and service. "What was the biggest risk you've ever taken?" I asked. Tom said that about six years ago, they found themselves in a price war with Pizza Hut. Rather than fight for customers who were shopping for discounted pizzas, they decided to change their target to middle and upper class families. He said this eradicated about 10 percent of their customer base, but the average ticket order went from $13 dollars to $18 per order. They succeeded in escaping the price war. Nice job. Eagle Boy's has seen double-digit growth in the last two years.