I've been spending a lot of time in New York lately getting to know the pizza industry there and eating more pizza than a college grad student working on his thesis. New York, like its pizza, is a unique experience. You may find something similar to it, but nothing exactly the same. On my most recent trip, I employed the expertise of Chef Bruno, corporate chef for Marsal & Sons who grew up in Brooklyn to show me some of the hidden secrets of the New York pizza culture. This guy is New York, so I knew he would be the perfect tour guide.

Before coming to New York, I had several conversations with Chef Bruno, asking where we would go and what was new. "Tom," he said in his thick New York-Italian accent, "I am going to let you in on a pizza secret that isn't known outside of New York and Long Island. We're gonna go to Umberto's and you are going to try Grandma's Pizza."

New pizza? I have to try this. If you remember, back in the Nov-Dec issue, I alluded to Grandma's Pizza in the Saucy Solutions article. Bruno sent me some newspaper clippings from Long Island and New York with full-page articles telling of the newest competition between Long Island pizzerias that are fighting it out over which one has the best Grandma's Pizza. I had never heard of it, and unless you live there, you probably haven't either. After this article runs, I'll bet you will start seeing it everywhere because Carlo Corteo, owner of Umberto's of New Hyde Park, agreed to show me how it's made, which we will demonstrate in this article.

When I get to New York, I meet up with Chef Bruno the next day and we began my second tour of the New York pizza world. After touring the Marsal & Sons factory with Richard Ferrara, we head over to Mama's Pizza and then on to Umberto's later that evening. Umberto Corteo, also known as the Pope of Pizza around Long Island is out of town, but brother Carlo is there. Many places in Long Island make Grandma's Pizza, but Umberto's was the first.

How to Make a Grandma's Pizza

As Carlo begins to make the Grandma's Pizza, I look at him and tell him the secret is out. "Everybody in the pizza industry is going to be copying this after this article runs," I say. He looks at me and smiles like a proud father who is sending his son out into the world to make a name for himself. I start taking pictures as he shows me step-by-step how it's done.

"This dough was pressed about two hours ago," Carlo explains. "The dough is thin, but not too thin. Somewhere between a Sicilian dough and a traditional New York crust. This was my mother's pizza, but we didn't have cheese on it when she made it in Italy. We couldn't afford it. She made bread and the last couple of doughs were used for pizza. It was basically fresh squeezed plum tomatoes that are drained for at least 30 minutes to remove the excess water, garlic, olive oil, oregano and anchovies. We started making it here at Umberto's about 15 years ago, but it has really caught on in the last couple of years and now everyone here makes it. We Americanized it a little by using mozzarella.

"You press this dough out in a square pan that is coated with olive oil. The sauce is the secret, but not that much of a secret. It's just peeled, hand-crushed and drained plum tomatoes, garlic, spices, oregano, olive oil, basil and salt. We start by layering the dough with fresh mozzarella we make here (Chef Bruno explains how to make your own mozzarella in this issue on page 99. You don't want to use too much cheese because this type of cheese will break up and also burn because of the cooking time, which is about 15 minutes. You take the sauce and spatter it on in spots on top of the cheese." Next, he adds some garlic and places it in random areas around the pizza. "You gotta have the oil," he says as he takes an oil pot and pours a little under the edges of the crust and then drizzles some over the top.

When it comes out, we all have a seat and I begin stuffing my face. This pizza goes back to the basics of pizza making. The bottom is slightly fried from the oil, but not too much. The sauce is rich, but doesn't overpower the other flavors because rather than covering the entire pizza, it is spotted over the pie. Every now and then, you get the flavor of the garlic, which is enhanced by the olive oil. This pizza is, like the name implies, a pizza that is made in the old school way. When you come to New York for the New York Pizza Show, Carlo will be on-hand to answer your questions about the Grandma Pizza and will also be in his restaurant if you want to drop by and try it out, which I recommend you do.

They Make Everything Themselves

After we finished eating, Carlo gave me a tour of the restaurant. One thing kept jumping out at me, which was that they made everything themselves. "This is our own sausage, here is the cheese we make ourselves, we roast our own vegetables, we make our own tiramisus, cakes and desserts," Carlo said. At one point we were in the basement and I saw a huge washroom. "What is all of this?" I asked. "We do our own linen service," he responded.

"We have a few locations around Long Island and we learned a long time ago that the only way to really know what was going into our products and control the quality was to do it ourselves," Carlo said. "Angela, who makes our cakes and desserts, also makes our fresh mozzarella. Not only is it a better product, we actually save money by making it ourselves. Her father used to be the local mozzarella maker in Italy and she learned from him. She has taught four or five others here how to make cheese. She is one hell of a lady and has been with me for over 10 years.

"We also make sausage from our own recipe," Carlo explains as we watch guys weighing out and boxing bags of sausage that will go to their other locations. "This is the only way to get sausage that tastes the way I remember it tasting as a child. Most of our own vegetables are roasted right here and jarred in their own oils, which tastes better than anything you can buy."

As far as linen, Carlo said that they decided it was cheaper for them to do it themselves than pay for linen service. "We spent a little money buying the washers, tablecloths, napkins and press machines, but in the end we are saving a lot of money and never have to worry about running out."

There is something of a mystery about how to make a New York crust. In my travels and research there, I have noticed something I haven't seen anywhere but in New York. Several of the pizzerias use wood dough boxes to proof their dough. "We started with them and they have been good to us," Carlo says. "So why change? The boxes are made of pine and cost about $20 to $35 to have made. The wood draws the moisture from the dough, especially on the bottom side that is against the box." When you bake the dough that has been proofed in wood boxes, it is dryer than dough proofed in plastic dough trays because the wood draws the moisture out. The boxes become oily after using them a while, but you wash them as needed to prevent mold buildup. "Why do others in other parts of the country have trouble making dough like ours? I don't think it is anything special. We all use the same ingredients. There's no secret, but I think it is the way you assemble the ingredients. It can be the humidity, the water temperature or the mixing time. Changing any one thing can completely change the dough. Do the wood boxes make a difference? Maybe so, but the biggest things are the ovens in which it cooks and the way the dough is prepared and proofed. The temperature and the oven are equally as important as the dough. You have to have a deck and an initial boost of heat."

Umberto's started when his brothers, Joe, Tiberio and Umberto came to the U.S. in 1962. One brother, Mike, was already here. They worked in Brooklyn for a couple of years learning the business. They opened Umberto's in 1965 and started out with about 1,200 square feet of space. "We had a sliding window in the front," Carlo says. "On busy days there were lines inside and outside. I came here from Italy when I was about 15 or 16. Since this place opened, we have expanded and taken over two adjacent building and have other family members with locations. We have always been a family business, but we are running out of family, so there may be other Umberto's opened up not owned by family members soon," he says with a laugh.

"The best advice I can give others is to be an apprentice with someone else in the business who is successful before you open," Carlo says. "You gotta work for those who have been successful and do what they do. After you have learned what they have to offer is when you can be innovative. Many of our competitors are our former employees. They learned and went out on their own. If the guy is good enough to be successful on his own, more power to him. If he is good enough, God bless him."

1. Start by pressing a Sicilian dough into a square pan that has been oiled with olive oil. 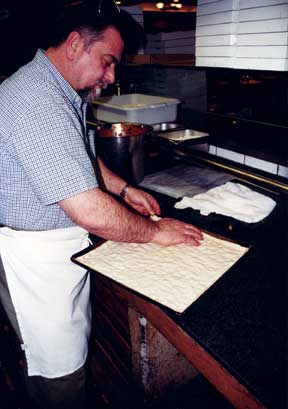 2. Layer the dough with Fresh mozzarella, but don't pile it on. 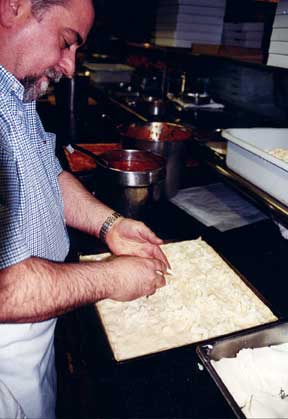 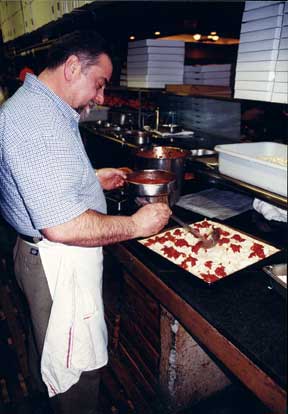 5. Add olive oil underneath some of the edges and drizzle some over the top of the pizza. 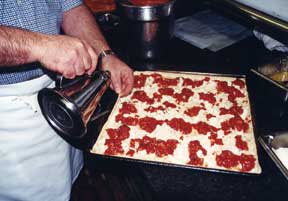 6. Bake (preferably in a deck oven) checking the bottom before removing. 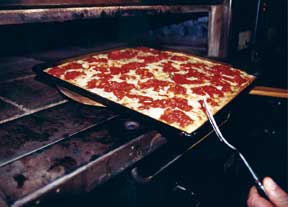 7. Market the pizza as Grandma's Pizza and be the first in your area before everyone else catches on like they did on Long Island. 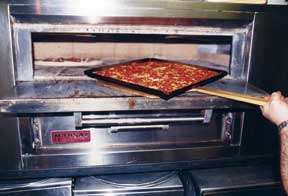