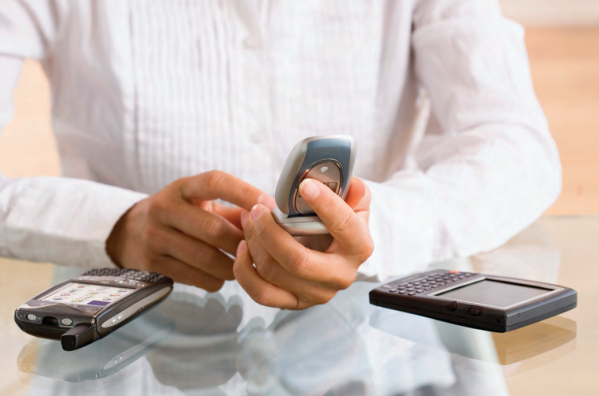 In a Web 2.0 world, mobile devices have changed the way consumers order in and dine out. Since 2007, when Domino’s (dominos.com) led pizza’s mobile ordering charge with a smartphone-friendly website, smaller chains and independents have joined the game by the dozens. In the wake of Pizza
Hut’s (pizzahut.com) 2009 iPhone app debut, even more operators have turned to text marketing and mobile app development for advertising. From a marketing standpoint, while you may still fi nd success with mass mailers, box toppers, print and radio ads, it’s important to remember that 18- to 34-year-olds (one of pizza’s prime demographics) are thoroughly plugged in—they actively use social media, download apps, hunt for Groupon deals and take stock in what they read on review websites such as OpenTable, Yelp and UrbanSpoon. According to Forrester Research, B2B mobile marketing alone is estimated to grow from a $29 million industry in 2009 to a $106 million industry in 2014.

Recent studies, such as one performed by the Pew Internet & American Life Project in 2010, affirm that the next generation of consumers are turning to mobile media at a rapidly increasing rate—up to one-third of U.S. 12- to 17-year-olds send and receive more than 100 texts per day and read incoming text messages within four to 20 minutes. The 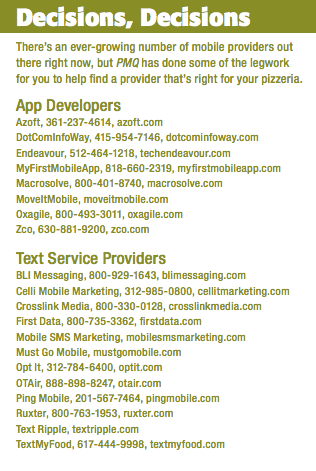 Code Administration estimates that 3.4 billion mobile messages were sent in the United States during 2008 and predicts that more than 4.9 trillion will be sent in 2011. In short, the scene’s gone mobile, and you’d better keep up!

However, these trends may be good for future business. Mobile marketing developers are leading some operators down a path where advertising is inexpensive and instant, and some operators are even finding ways to manage staff and inventory in the palm of their hand. The latest mobile technology might even change the way your servers take orders! To answer your questions on mobile marketing, PMQ tracked down technology experts and let operators have a go at the issue in our Think Tank (PMQ.com/tt) to evaluate the mobile scene and how it can affect your pizzeria.

The Three Ps of SMS

Text marketing, often referred to as short message service (SMS) marketing, can be an effective way to bring your store’s specials to customers. A 2010 study by research firm Borrell Associates found that mobile coupons are redeemed 10 times more often than print versions. No other advertising medium generates as instant a result, allowing operators to evolve specials more quickly. However, be thoughtful about the nature of the medium. Mike Craig, co-founder and VP of marketing for Ruxter, a Kansas City, Kansas-based mobile marketing company, notes it’s important for operators to remember the “Three Ps” of text marketing: Permission, Pocket and Privilege. “You have to look at mobile with three key elements,” he explains. “It’s not as if you can just buy a list of numbers and start a campaign. Also, the mobile experience is different than a PC experience; you have a 2’’ screen instead of a 17’’ screen. Finally, your offer has to have unique value. Those doing the best job in mobile take those three areas to heart.”

Craig explains further that text marketing should be an element in a larger marketing campaign. Far too often, he says, operators load social media and other advertisements with the same content. Instead, one element should be designed to complement or draw customers’ attention to another element—and, of course, to your store. Text messages should be brief, and timing is key. Steve Bessonny, COO of Text Ripple, an Auburn Hills, Michigan-based mobile marketing provider, notes that unlike other advertising mediums, the advantage of text marketing is that you get instant results with the ability to set a schedule weeks in advance. “Text marketing is limited only by your creativity,” Bessonny says. “Be smart with your specials. For instance, it doesn’t make any sense to send a Monday night football special on a Friday. You don’t want to spam people in your text club; you want to give them an offer they can be excited about.”

However, customer permission has stumped more than one pizzeria owner in their attempts to integrate SMS marketing. Building an effective list of customer numbers is a task that doesn’t happen overnight. Try gathering numbers inhouse, and through email clubs and print advertising. Integrate shortcode text specials into your print advertising and on your delivery vehicles to build a mobile marketing base, too. But both Craig and Bessonny say text club building is where you should strike with social media to beef up your list. In 2010, Twitter introduced a free text building service that allows
your followers to opt in to receive your tweets on their phones. “The beauty of it is that once someone is in your text club, you’ve earned the right to market to them directly,” Bessonny says. “This means the people you are marketing to want to hear your specials!” 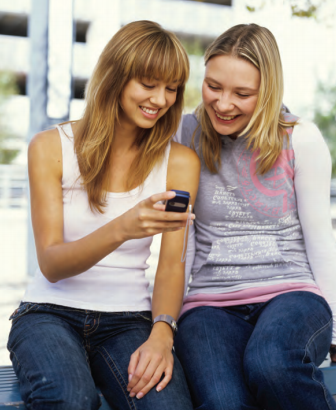 An App That Grows

It’s no secret that many large franchisees benefit from corporate-supported mobile apps. But in the last few years, mobile applications have become more accessible to operators at small- to medium size pizzerias, and the possibilities are mounting—research firm IDC predicts that by 2014, the number of downloadable applications will increase by 60% and generate more than $35 billion in revenue. While text marketing is compatible with almost every cell phone, a growing number of consumers with smartphones have opened a new world of marketing possibilities; what Clint Parr, CEO of MacroSolve, a Tulsa, Oklahoma based mobile application developer, calls the “integration of functionality.”

“Any time you have a downloadable app with your brand logo in someone’s hand like that, it opens not only marketing possibilities, but a whole lot of new possibilities,” he explains. Parr points out that the future of mobile will affect operators on two levels: First, customers will be able to browse your menu with a growing amount of interactivity—for example, many developers are looking into introducing elements such as video links in menus, and incorporating smaller apps, such as ones that calculate wine and beer pairing options, inside a pizzeria’s application. Second, developers are finding ways to link mobile applications with POS systems, allowing you to use your application for management issues, including scheduling, supply and payroll. “Operators need to ask themselves if they are satisfied,” he says. “If a smartphone-friendly website works for you, fine, but with new apps, you can have 10 mini apps in one.” Parr’s advice: Screen multiple app developers for flexibility before making a commitment; some templates are more user-friendly than others and require less training and customer service. As smartphone apps become widespread, the flexibility to add and edit features will be more important than saving a few dollars.

Still other mobile elements are likely to be introduced into applications and POS development. Many may affect the dining experience, including the ordering process. In the past year, at least two developers have introduced a service that allows customers to voluntarily communicate with servers via text to streamline the serving process. Bob Nilsson, president of TextMyFood, explains the advantage: Customers can rely more on impulse with their purchases rather than the server’s availability. “Some people are wary because it seems like it takes people out of the process,” he says, noting that
server texting is an ideal in-house way to build a text club. “But it really doesn’t. What we’ve found is that servers can work their sections more efficiently during rush hours, people spend more per ticket, and tips are higher.”

Whether you’re already incorporating mobile marketing into your business, or are still skeptical of the process, understanding the basic practices and trends in mobile marketing is becoming an essential skill. While your market may be small, studies and real-life evidence show that in this new-media world, the rewards for being media savvy are tremendous. 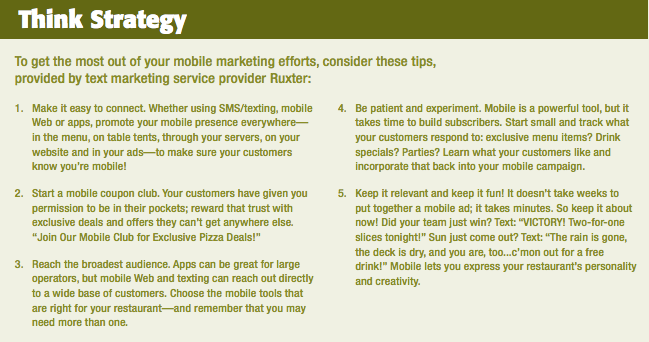