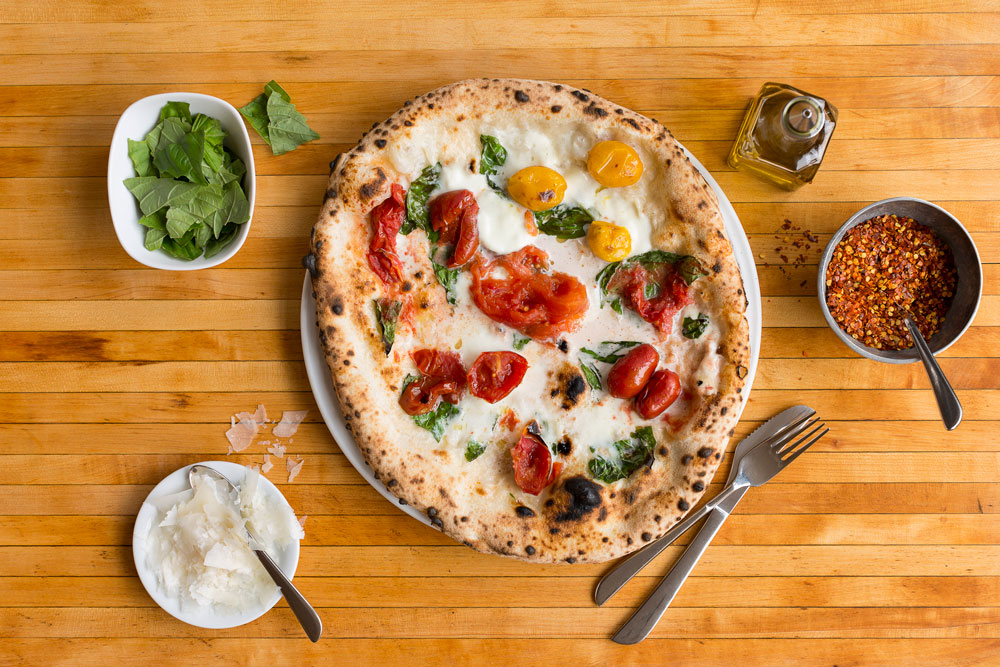 Naples, a coastal Mediterranean city of almost 1 million residents, has been a center of architecture, music, religion and art for thousands of years. But we have one more thing that makes us grateful to Naples: traditional Neapolitan pizza. Characterized by a well-fermented dough and fast cook time in a superhot wood-fired oven, with minimal toppings and a slightly charred crust, this classic style of pizza making is zealously guarded by two organizations: the Associazione Verace Pizza Napoletana (VPN) and the Associazione Pizzaiuoli Napoletani (APN). They make the rules for Neapolitan pizza—and those rules are pretty much written in stone.

Although similar in their missions, these two organizations serve slightly different purposes, as Scott Wiener of New York-based Scott’s Pizza Tours explains. “APN is more about technique and certification for technique, and VPN is about product,” he says. “If you read the VPN literature and guidelines, it’s really specific ingredients and specific procedure. APN does not have guidelines like that. APN is more about training and technique. A pizzeria can be VPN-certified and have APN-certified pizzaioli. It’s not like the two are opposed to each other; they’re just taking different angles.”

Offered in Italy and the United States, APN certification can be bestowed only by one of the 10 board members of the APN. To become certified, pizza makers must attend an APN school to learn the correct methods, which center around how to make dough, tomato sauce and cheese; what equipment is used; how the dough is stretched and cooked; how to place ingredients on the pizza; and how to operate a wood-fired oven.

The VPN, meanwhile, takes into account certain specific criteria for certifying an authentic Neapolitan pizzeria. These include: a wood-fired oven that heats to 900° to 1,000°F; a mixer that imitates the action of hand-forming while mixing the dough; dough that incorporates just four ingredients—flour, salt, yeast and water—and meets strict standards for proofing, cook time and stretching techniques; and fresh authentic-Italian ingredients, including tomatoes, fior di latte or bufala mozzarella, extra-virgin olive oil and fresh basil.

“A good starting point for Neapolitan pizza in the United States is around 2000, when it kicked off into hyperdrive.”

“What the pizzerias do is to demonstrate that they can follow the rules,” says Donato Rumi, VPN’s marketing and promotion director. “First, we require certain equipment. The most important is an approved mixer. They must submit some documentation, mainly videos, and we check the way they are preparing and fermenting the dough, the way they are cutting and forming the dough balls, and most importantly, the way they bake the pizza in respect with the regulations.” Following this initial process, any errors are corrected, and VPN then sends the restaurant’s application to its headquarters in Naples, where other errors may be corrected, and a formal response is formulated.

Related: Are your “authentic Italian ingredients” really made in Italy?

Jonathan Goldsmith, padrone at Spacca Napoli Pizzeria in Chicago, recalls what the certification process was like for him. “It was enjoyable,” he says. “I believe I sent VPN Americas’ president Pepe Miele a video to see if our establishment fit the guidelines, such as the wood-burning oven and the mixer, and I took a video of myself making dough in the mixer. Then we arranged for him to come visit…I remember being in the dough room together, doing a mix, and then we went upstairs, and I was extending dough, baking it, and then we ate, and that was it. He did suggest one correction, that we not hold the dough in a closed container while it rests, because too much heat would generate, which wouldn’t necessarily be in the service of proper dough development.”

In other words, earning VPN certification takes time. And once you’ve earned it, you still have to maintain it. Periodic visits by representatives of the organization ensure that their strict regulations continue to be followed. “All over the world, we have 600 certified pizzerias,” Rumi says. “In North America, we have 120. It is a select group. You can lose the membership….We periodically check the pizzerias to be sure that everything is done in accord with the regulations. This is the only way to keep your membership.”

Servants to the Pizza

While some of the earliest American pizzerias made pies that were inspired by Neapolitan pizza, they wouldn’t be technically classified as true Neapolitan by today’s standards. “The pictures we have of them look close, but, in all likelihood, they were not Neapolitan,” Wiener says. “VPN today would not have certified the earliest pizzerias in America, because the VPN wants you to use Italian ingredients. The earliest American pizzerias were not using Italian ingredients, besides probably tomatoes. Beyond that, it was American flour, American dairy products and American ovens, which were coal-fired ovens in the early days. That’s a totally different bake and texture from a wood-fired oven.”

Although it has been around for roughly 350 years, authentic Neapolitan pizza didn’t gain mass popularity in North America until the turn of the century. “A good starting point for Neapolitan pizza in the United States is around 2000, when it kicked off into hyperdrive,” Wiener says. “The first places that I remember doing it were La Pizza Fresca and Naples 45, both in New York. Both of those were VPN-certified. Also, Pizza Napolitano, which started off in Point Pleasant, New Jersey, and Kesté in New York. Kesté was a big one—not because it was the first one, but because it was a ‘training academy’ for New York with the owner, Roberto Caporuscio. He was not only the owner of the restaurant but also did training and certification under the APN organization. He had a place in Pittsburgh for seven years, and then ended up in Manhattan, where he sparked a whole bunch of other Neapolitan-style places as well.”

Although not commonplace, authentic Neapolitan pizzerias can now be found around the country and have sparked a legion of hungry, loyal fans. That’s in part because Neapolitan pizza makers care passionately about their craft, and it shows in their food. “I think it’s important that we are servants to the pizza—we represent the pizza,” Goldsmith says. “It’s the pizza that’s important—not the pizza maker. We’re lucky to be honored to work with pizza, but we’re not more important than it.”

This article originally appeared in the November 2019 issue of PMQ.