The Robots Are Coming: Zume Pizza May Be the Sci-Fi Pizzeria of the Future - PMQ Pizza Magazine 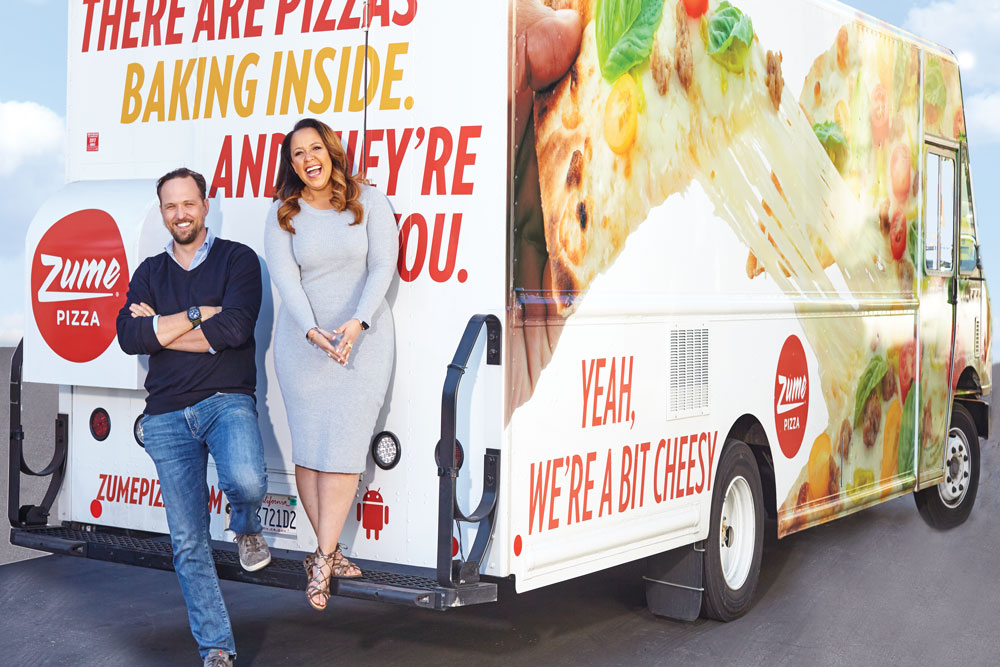 If robots ever conquer the world, Julia Collins will be ready. They might even be her robots, in which case there’s no reason to panic: It will be a friendly takeover. Collins and her partner, Alex Garden, have developed a “cobot culture” at their single-unit pizzeria, Zume Pizza, in Mountain View, California. Here, people and machines work side by side, trying to make and deliver artisan pies faster than any pizza company in the history of the industry. Their goal, Collins says, is not to eliminate jobs for flesh-and-blood workers, but to free them up to focus on what they do best—thinking, dreaming, planning and innovating—while machines perform the routine, repetitive tasks that few people really enjoy.

But if you think robots making pizza is a wild idea, it’s actually the least interesting thing about Zume. The revolutionary part is not who makes the pizzas or how they’re prepared, but when they get made and delivered—because once an order comes in, the delivery driver is already just minutes away from the customer’s doorstep with a fresh, tasty pie baking right in the truck. It’s a game-changing business model with a futuristic, sci-fi twist that’s thrilling to some and scary to others. But, according to Collins, Zume Pizza is a company with plenty of heart as well as smarts.

Located in geek-chic Silicon Valley, Zume Pizza has no storefront, but it does have an engineering lab and a team of robotics experts. And, thanks to a specially designed algorithm that tracks customer preferences, co-founders Collins and Garden usually know what you will order before you do. But Zume is no cold, impersonal culinary dystopia with food that’s one step above a storebought pizza kit. “We’re a food company first,” Collins says. “Everything we do from a tech perspective is in service of giving people the most delicious pizza at a fair price as fast as we possibly can.”

Collins, a passionate foodie who holds degrees in biomedical engineering from Harvard and business from Stanford, learned foodservice while working for New York-based Shake Shack founder Danny Meyer “back when we had just one shack,” she says. She then co-founded Mexicue, a food truck that combined Mexican cuisine with barbecue and now has three brick-and-mortar locations in New York. She also served as director of restaurant development and foodservice for Murray’s Cheese and opened the Afro-Asian fusion restaurant, The Cecil, in New York.

But Collins missed her West Coast life and was looking for a reason to return home. She found one when a friend introduced her to Garden, the former president of Zynga Studios, a leading game developer. “From our first conversation, we knew we were going to work together,” she recalls. “We had a lot in common, and we had complementary skill sets that would make us a pretty formidable pair.”

They also had some unusual ideas that may revolutionize the pizza industry.

Rise of the Robots

First, there’s the unique predictive software that suggests what kind of pizzas to make that day. “Pizza ordering is really predictable,” Collins says. “As individuals, we’re all unique, but on the aggregate, people tend to order the same types of pizza at the same time of day, even on the same day of the week. Using our algorithm, we predict what pizzas they’re going to order before they order them. Then, every morning, we prepare a daily inventory using our robot-enabled pizza assembly line.”

Most of the robots have Italian names, but they’re strictly machines with high-functioning extensions—no chatty, humanlike C3POs or Benders in this bunch. Working on the assembly line, one machine (still unnamed) spreads the dough balls into 14” discs. As a conveyor belt carries the pizza along, Pepe and Giorgio squirt sauce onto it, and Marta, whose end-of-arm tool looks like a flat-bottom ladle, spreads the sauce evenly around the crust. Humans step in to add the toppings, then Bruno—essentially a powerful robotic arm—removes the pie from the line and inserts it into Zume’s double-decker Italforni oven. Each pizza is par-baked, then transferred by another unnamed robot from the oven to a rack for the next stage of the process (more on that later).

Of course, Zume isn’t the first company to incorporate machinery into the pizza making process. The Chicago- based Pizzamatic Corporation (now owned by Grote Company) was a pioneer in pizza automation—including sauce depositors and slicers—in the early 1960s. But Collins and Garden have shrewdly made robotics part of their marketing and PR strategy, with outlets like CNN, Bloomberg and Fortune providing nationwide buzz that most pizzeria owners only dream about. “There’s something, I think, in the cultural zeitgeist where, when you put the word ‘robot’ next to the word ‘pizza,’ you create the sexiest combination of words ever,” Collins notes, with a laugh.

“Everything we do from a tech perspective is in service of giving people the most delicious pizza at a fair price as fast as we possibly can.”
—Julia Collins, Zume Pizza

But, while media coverage has focused on Bruno, Marta and the gang, Collins would rather talk about what happens after their work is done. Humans load the par-baked pies onto one of the company’s 11 huge, branded delivery trucks, and that’s where things get really interesting. Most of the trucks carry 28 ovens (or 56 ovens for catering trucks) as well as refrigeration equipment for storage. A second algorithm—which pinpoints the service areas where a high density of orders will likely come from—tells the drivers where to go. And when the orders start coming in, a second employee (or, on a slow day, the driver) pops the par-baked pies into computer-operated electric ovens for the finishing bake. By the time the truck arrives at a customer’s house, the pizza has usually just come out of the oven—at the most, it’s been out for only a few minutes.

Think of it as an old-timey ice cream truck, but with hot, fresh pizza instead of a vanilla cone. “Our trucks operate in three modes,” Collins says. “When we have about four orders or less, we’re in primary delivery mode, driving around from customer to customer, baking pizza on the way. When we get busy, we go into forward deployment mode. The truck stops, and smaller delivery vehicles —mostly Fiats and, coming soon, scooters—pick up the pizzas and make very short-run deliveries around the area. The third mode is classic food-truck mode, where the driver stops somewhere downtown on a Saturday night, opens the window and sells pizza from the truck.”

With Zume’s model of delivery—built around what Collins calls “predictive and delocalized inventory”—
pizzas might arrive a little too soon. “The most common tickets we get at our customer support desk say, ‘How did you get to my location so fast? I was still at the grocery store when you arrived,’” Collins says. “It’s delightfully fast, but not because we drive fast—we actually drive very slowly in these big vehicles. It’s because we’ve predicted what pizzas you’re going to order, and we’ve delocalized the inventory so we’ve got the pizza waiting near your house.”

The Zume model brings another advantage to the bottom line. “Here in California, many restaurants pay as much as 10% of their revenue in rent. Because Zume doesn’t have a storefront, we pay only about 1.5% of our revenue in rent,” Collins says.

So the pizzas are fast, but do they taste good? To launch Zume, Collins knew she needed to hire “the best pizza chef in America. And I think I found him in Aaron Butkus,” she says.

Butkus was the sous-chef at the landmark Brooklyn, New York, pizza shop, Roberta’s, before Collins lured him cross-country to Silicon Valley. He’s the culinary brains behind Zume’s pizzas, while Collins works with a network of local farmers to source her ingredients. “Because we save money on rent and save a little bit on automation—although we pay our employees well—we have margin left over. We don’t want to be the most profitable company; we want to be the one with the best product. So we reinvest our savings in locally sourced ingredients. And when I say local, I mean I could theoretically wake up in the morning, drive around this 100-mile radius and visit all 14 of our farmers in a single day.”

Beginning of the End?

But Zume has its detractors, including some who say robot-made pizza signals the beginning of the end for the pizza industry as we know it. Is
factory-style pizza really artisan pizza? And what happens to the economy when robots take away all of those kitchen jobs? “I think anyone who is the first at something will encounter equal parts excitement and fear,” Collins says. “I want to be available for these conversations. Because Alex and I are at the leading edge of this trend, we’ve decided to set the right standards and values for how to create better jobs through automation, not for how to eliminate jobs through automation.”

Zume presently has 86 employees with heartbeats. “All are W-2 employees with health insurance, benefits, the whole megillah,” Collins says. About one-third work in engineering, sales and marketing, while 10% handle customer service and 15% work in the kitchen. Drivers (or “pilots,” in the Zume nomenclature) comprise the majority of the jobs, and half of the pilots are women, Collins says. Ongoing job training and education help prepare Zume’s kitchen workers for other positions within the company. “Automation can disproportionately affect folks at the lower end of the socioeconomic spectrum,” Collins notes. “And the restaurant industry doesn’t have a good record of taking care of folks. We care a lot about that, so we offer tuition reimbursement and classes so our people can learn coding. We want them to participate in the new technology economy.”

In an interview with Bloomberg last year, Garden, Collins’ partner, noted it will be “a very, very long time before machines reach a point where they can do everything that a person can do—I mean, probably not in my lifetime.” But the rise of the robots appears inevitable. Fortunately, someone still has to design, build and control those robots. “Automation is coming,” Collins says. “There is no way around it. The question is how you, as an owner, can use automation to create better jobs for people, not just bigger profits for your shareholders.” 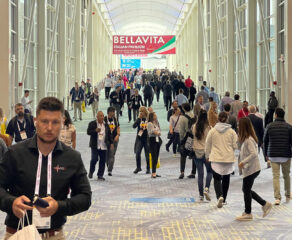